JONESBORO – Yusef Komunyakaa will read from his work on Friday, April 4, at 5 p.m. at Arkansas State University’s Delta Symposium.  At the conclusion of the reading, to be held in the Wilson Hall Auditorium, Komunyakaa will answer questions and sign books.  Presented by A-State’s English and Philosophy Department, the reading is free and open to the public.

“The English and Philosophy Department is especially pleased to have Yusef Komunyakaa participate in the Delta Symposium,” said Dr. Gregory Hansen, professor of folklore and English, and symposium co-chair.  “This acclaimed poet will contribute to the reunion-like atmosphere of this 20th anniversary of the event, as we have been fortunate to have him participate in a previous event more than a decade ago.”

Komunyakaa teaches at New York University, where he is a distinguished senior poet and professor in the Graduate Creative Writing Program.  Previously he taught at the University of New Orleans, Indiana University, and Princeton University.

Komunyakaa has been the recipient of numerous literary accolades, including the Pulitzer Prize, the William Faulkner Prize from the Universite de Rennes, the Kingsley Tufts Poetry Award, the Wallace Stevens Award, the Ruth Lily Poetry Prize, the Thomas Forcade Award, the Hanes Poetry Prize, and the Morton Dauwen Zabel Award.  He is a chancellor of the Academy of American Poets.

His presentation will be a highlight of this year’s Delta Symposium, April 2-5.  Aside from the reading, which will be held in Wilson Hall, Room 205, most activities will be held at the Carl R. Reng Student Union.

Delta Symposium XX is sponsored by the Department of English and Philosophy.  For more information, one may contact symposium co-chair Dr. Gregory Hansen, ghansen@astate.edu, or the Department of English and Philosophy at (870) 972-3043, or consult the website http://altweb.astate.edu/blues/,  the Delta Symposium Facebook page, or A-State’s news releases at http://www.astate.edu/a/asunews/. 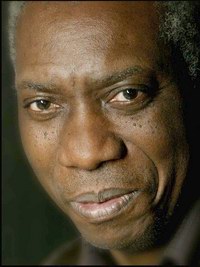