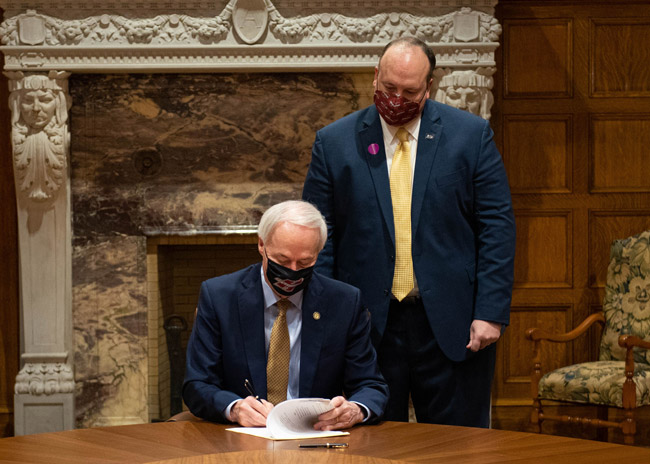 Act 18 also expands the ASU System Board of Trustees from five members to seven. The additional members will be appointed by the governor.

“While we have previously welcomed Henderson as a member of the ASU System family and worked closely with the institution for a year and a half, we’re thrilled for this partnership to be finalized,” said Dr. Chuck Welch, president of the ASU System. “It’s been a long process, and we appreciate the rapid action of the General Assembly and Governor Hutchinson to bring it to a close. We’re grateful to have interim Chancellor Jim Borsig in place to lead Henderson through this transition and couldn’t be happier about this partner in the ASU System’s ongoing expansion.

“The growth of the ASU System has already delivered significant efficiencies, financial savings and services to our member institutions, and the addition of Henderson will further enhance these initiatives,” Welch added. “Our recent additions of information technology and strategic research expertise at the system level bring even more benefit as our institutions work together on challenges and opportunities in higher education.”

“We are excited to officially become a member of the Arkansas State University System,” Borsig said. “Henderson State has worked with the ASU System for more than a year on the transition plan, and we are happy to finally have all approvals in place. I would like to thank Dr. Welch and his amazing team for their support and expertise as we worked together toward this goal. We look forward to continuing Henderson’s rich traditions and mission of service to students as a member of the ASU System.”

Founded as a private institution, Henderson today offers more than 65 undergraduate and graduate programs. It became a public institution in 1929 and is the second oldest university in Arkansas under state control. Henderson, which competes in NCAA Division II sports, would become the third ASU System institution with an intercollegiate athletics program. Arkansas State University has an NCAA FBS Division I program, and ASU Mid-South competes in NJCAA Division II men’s and women’s basketball.

With the addition of Henderson, the Little Rock-based ASU System now serves 37,465 students annually on campuses in Arkansas and Queretaro, Mexico, and globally online with a total operating budget of $348 million.