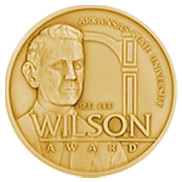 The Wilson Award is presented annually at the Student Honors Awards ceremony to the university's outstanding graduating senior. The recipient is selected on the basis of character, determination, involvement, and academic achievement. This honor is bestowed in memory of R.E. Lee Wilson, a member of the Arkansas State University Board of Trustees from 1917 until his death in 1933.

Presentation of the award began in 1934. Until 1980 the award was presented to the outstanding male and female graduating senior. Beginning in 1981 it was determined this practice was no longer necessary, and the university began presenting the award to one student.

Any graduating senior this academic year (August, December, or May) is eligible to apply. The selection committee considers participation and leadership in student organizations along with scholastic achievement. Leadership and participation in organizations or activities of campus significance are considered more strongly than those of a general nature.

All completed applications are reviewed by a selection committee comprised of faculty, staff, students and former Wilson Award recipients. The committee selects a minimum of four and maximum of seven students as recipients of the Distinguished Student Awards. From the Distinguished Student Award winners, the committee then selects one recipient for the R.E. Lee Wilson Award. Nominees should be prepared for a possible brief interview as part of the selection process. The awards will be presented at a ceremony in April.

Previous Wilson Award recipients formed a Wilson Fellows Chapter of the ASU Alumni Association which has funded a scholarship program. Wilson Award winners receive a post-graduate scholarship from the chapter to be used for additional education after graduation from A-State.

The complete package, including all three recommendation letters, MUST be submitted by NOON on Friday, January 28, 2022 to:

Late or incomplete applications will not be considered; there will be no exceptions.