Work by Sikkel and Colleagues Continues to Garner National Attention 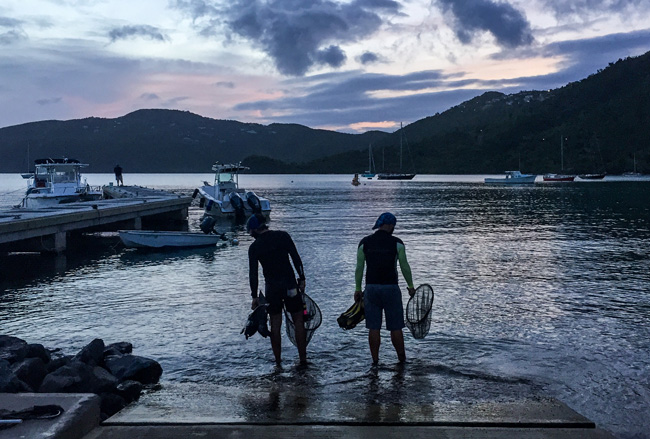 The team’s work captured the attention of the prestigious national publication, Scientific American, which featured some of their most recent work in its November issue, referencing the "storm-surfing parasites" the researchers documented during the 2017 hurricane season.

The Scientific American article focuses on research Sikkel, one of his students and colleagues from Portugal published in May in the scholarly journal Scientific Reports, in which they documented changes in population and genetic structure of the marine parasite, Gnathia marleyi. The National Science Foundation supported their study, which concluded the changes were attributable to two major, back-to-back, hurricanes that swept the Virgin Islands and Puerto Rico.

The group of researchers with which the A-State associate professor works studies how the environmental disruption in the sea affects the interaction between hosts and parasites.

For those less knowledgeable about marine science, the attention Sikkel and his team have received recently and over the past decade underscores its significance.  In essence, these parasites are like ticks and mosquitoes of the sea and play a very important role in the transfer of energy in marine ecosystems.

"Given that all animals must make a living by consuming something, parasites do so by removing small amounts of energy from their hosts, typically without killing them. They make up about half of all organisms, and even more in high biodiversity systems like coral reefs," Sikkel explained.  "They are the most common consumer strategy. Indeed, their biomass rivals that of top predators, like sharks."

An understanding of the changes involving marine parasites is important to those who study the environment.

The Sikkel team published 11 peer-reviewed articles on gnathiids in 2020. This included papers on culturing them for research and their effects on juvenile coral reef fishes. In October, their article on how high in the water column gnathiid isopods' swim to infest Caribbean coral reef fishes was published in the Journal of Crustacean Biology.  Sikkel was joined on this project by three of his Ph.D. students and a former undergraduate student at A-State, along with one of his master's students at the University of the Virgin Islands.

Sikkel also was co-author of another study published in October, examining the effect of an acute water temperature increase on the survival of the parasite.  He and fellow scientists from the Philippines and Australia, supported by NSF and the National Geographic Society, showed in research that was published in the journal Oceans that gnathiids experience higher mortality when seawater temperatures in coral reefs rise high enough to trigger mass coral bleaching events.

"In a healthy ecosystem, parasites do not cause a lot of problems for their hosts. They are kind of like a sales tax, taking a little bit from each customer," Sikkel continued.  "But, when ecosystems become disrupted, the balance between parasites and hosts also gets disrupted and problems start to occur. The increase in diseases, like Ebola, West Nile Virus, and COVID-19 that make the jump between animals and humans, and/or expand their range, is a great example of this."

In their most recent article in the journal Ecosphere, featuring the Ph.D. work of current A-State instructor John Artim, the team found that heavily degraded reefs with little live coral had the most gnathiids. This result was not surprising because live coral eats gnathiids, but it does mean that gnathiid impacts on fish may increase as coral reefs degrade due to climate change and other human-caused damage.