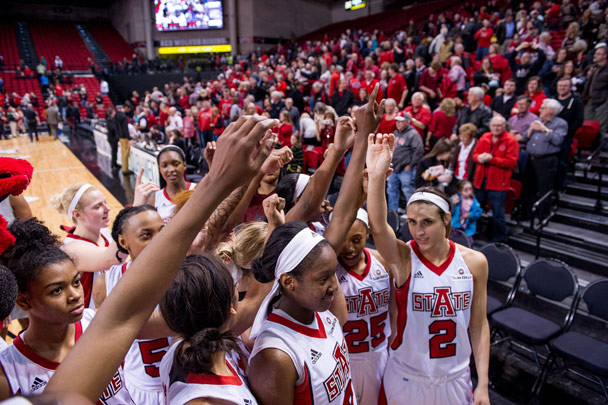 A-State improved to 24-10 and is only one win shy of tying the school record for single-season victories.  The Red Wolves also improved their home record to 14-1 this season and now stand 6-1 all-time in home WNIT games.  Western Michigan ended its season with a 20-13 overall record.

“You could not help but the feel buzz around the community and campus about this game over the past days or so,” A-State head coach Brian Boyer said. “This team deserves all the attention and support the community has given them and the players noticed it too and really appreciated all the fans and the atmosphere that was created.”

Making its 10th all-time appearance in the WNIT, including the last two years, the Red Wolves will advance to the second round for the first time since 2007.  A-State will play the winner of Middle Tennessee and Ball State in the second round, set for March 21-24.

Arkansas State was led by three players scoring in double figures, including Aundrea Gamble with a team-high 19 points.  The junior guard also dished out a team-high four assists, giving her a school-record 170 for the season.

Senior guard Hanna Qedan added 10 points for the Red Wolves, and senior forward Jasmine Hunt collected her fourth double-double of the season with 11 points and a career-high 16 rebounds.

A-State was able to build a 28-20 halftime advantage and led throughout the second half, although Western Michigan was able to make it a one possession game several times.  The Broncos chipped away at the Red Wolves’ lead early in the second half to pull within 38-36 with 14:27 left in the game.

Still leading by just two points, 42-40, three minutes later, Arkansas State went on a quick 6-0 run to increase their lead back to eight points at the 9:30 mark.  The Red Wolves achieved their first double-figure lead with 4:21 remaining, taking a 55-45 lead on a jumper by junior forward Khadija Brown-Haywood.  Western Michigan couldn’t get any closer than seven points the rest of the way.

A-State posted a .357 shooting percentage in comparison to Western Michigan’s .316 and out-rebounded the Broncos 43-38.  The Red Wolves, who turned the ball over 13 times, also took advantage of 19 WMU miscues it turned into 15 points.

While Arkansas State made just 2-of-13 three-point attempts, it connected on 19-of-27 free throws for a .704 percentage.  The Broncos shot 35 percent from beyond the arc and 66 percent at the charity stripe.

“It was an interesting game from my observation because I thought we played really well tonight, but I would like to know where my offensive team went,” Boyer said. “Shooting 27 percent in the first half is not something that we are accustomed too and I thought we had a lot of good looks that just weren’t falling. On the defensive end our plan was to create as much havoc and pressure them as much as we could.”

A-State opened up an early eight-point lead seven minutes into the contest, but WMU responded by going on a 13-4 run to take a 17-16 advantage with 8:26 left before the break.  It was the Broncos only lead of the game as the Red Wolves outscored them 11-4 the remainder of the first half.