JONESBORO – With the steel industry playing an increasingly prominent role in the economy of the region, a generous donation to the engineering program at Arkansas State University has special significance.

“The Systems Group is honored to be part of helping the engineering students at Arkansas State,” Morgan explained.  “The teaching sculpture allows teachers to show students the actual connections of structural beams used in commercial and industrial buildings and equipment structures.  Systems is dedicated to helping create the next generation of people to help further the steel industry.”

The sculpture was built and given to the university by The Systems Group, announced Dr. Paul Mixon, professor and interim dean of engineering.

"We are delighted with this donation and plan to use it extensively to give our students who are studying structural steel a more real-world, hands-on experience,” he added.

Mixon said several A-State alumni of the mechanical and electrical engineering programs are filling key positions at steel manufacturing and fabrication facilities, and more are expected to do so because of industry expansions in the region.

According to the American Institute of Steel Construction (AISC) website, the original steel teaching sculpture was created by Duane Ellifritt, professor emeritus of civil engineering at the University of Florida, where it was erected in 1986.  Some years later, AISC requested and received permission to use and promote a scaled-down version of the sculpture as a teaching aid. 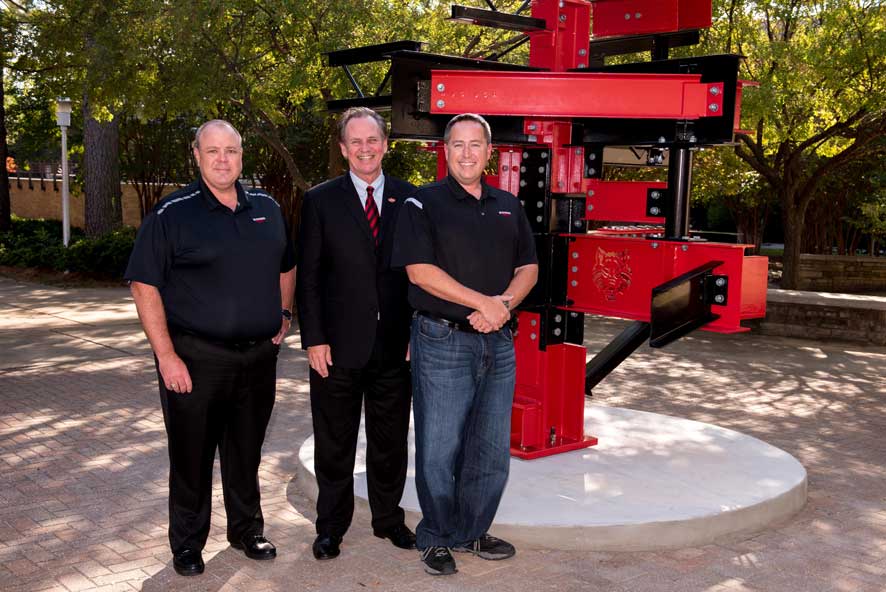 Mixon said the new AISC Teaching Sculpture is a 3D model which will help create for students a more thorough understanding of fundamental steel members and connections.  It will be installed in a prominent campus location between the northwest of Laboratory Sciences Center, West Wing, and the southeast corner of the Dean B. Ellis Library.

"The Steel Sculpture is not only a teaching tool, but it is also a beautiful work of art and will be a landmark in its new central location on campus," he added. "With the gift, Arkansas State University joins more than 150 other campuses worldwide in displaying a version of this beautiful sculpture."