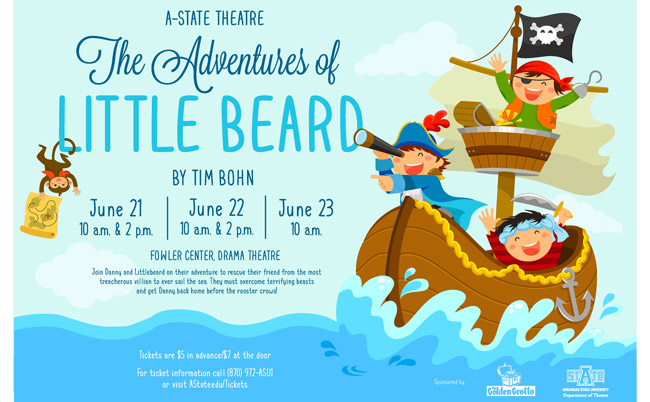 The 25th season of children’s theatre at A-State will open with "The Adventures of Littlebeard" by Tim Bohn.

Danny is a kid that loves to read so much her mother can’t get her to stop. Danny gets to do more than read about science and adventures when Littlebeard the Pirate enlists her to go on a rescue mission to save his beloved chicken, Polly.  Along the way they face monsters, wild animals and Littlebeard’s villainous brother, Crustybeard.

"The Adventures of Littlebeard" will be produced by A-State Theatre students under the direction of Tim Bohn, department chair and associate professor of theatre.

The performers include Katelyn Stanton from Trumann as Danny, David Norris from Batesville Southside as Littlebeard, Lauren Wilcox from Jonesboro as Crustybeard, and Kassidy Ratz from Beebe as Mother, Mommybeard, Stinkbill, Tiger and Spider Queen.

All seating is reserved.  Tickets should be purchased in advance at the Central Box Office in the First National Bank Arena for $5, by calling 972-ASU1, or online at tickets.AState.edu.  Tickets may also be purchased at the door (if available) on the day of the performance for $7 each.  Reservations are highly recommended.