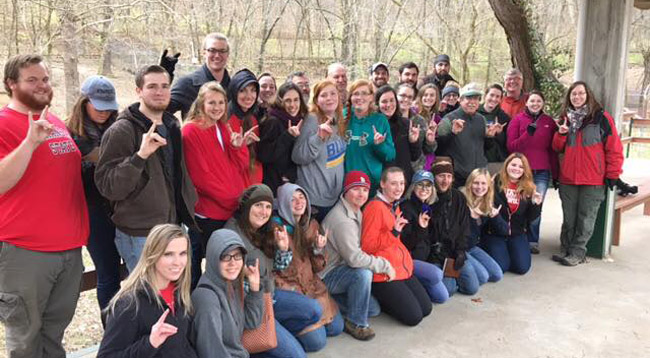 Students from Arkansas State University gathered for a photo during their recent visit to the Endangered Wolf Center in St. Louis.

Open to students, faculty and the public, the screening will be at 7 p.m. Friday, Jan. 20, in the third floor auditorium of the Reng Student Union (GPS 101 N. Caraway Road).  The North Parking Facility, adjacent to the Union, will be open to the public at no charge.

Following the film, there will be a panel discussion featuring Smith, an award-winning film producer, and other prominent voices in the red wolf survival movement.

UPDATE: An educational workshop about red wolf preservation is scheduled for students and the public, Saturday, Jan. 21, 10 a.m., in the third floor auditorium of the Student Union. Details are in a news release.

"Red wolves are the only large carnivore species that is solely native to the United States -- truly 'Made in the U.S.A.' They are more American than apple pie and baseball combined, yet most Americans don't realize that red wolves exist, let alone that they are on the brink of extinction,” said Virginia Busch, executive director of the Endangered Wolf Center (EWC) in St. Louis.

Several faculty members in the Department of Biological Sciences and student members of the Wildlife and Fisheries Club at Arkansas State visited the EWC in December to follow-up on their interest in the preservation efforts.  Students are especially interested in the project because A-State's mascot is the "Red Wolves."

In addition to saving red wolves from extinction, the EWC would like to "bring them back to the wilds of Missouri and Arkansas in the near future," said Regina Mossotti, director of animal care and conservation.

In addition to Smith and Mossotti, the red wolf species survival plan education advisor, Ashley Rearden, will be a panelist.

Biological sciences faculty are already making plans to incorporate some aspects of red wolf preservation in classes such as "Conservation Biology" and "Biology of Animals," according to Dr. Tom Risch, department chair and professor of animal ecology.

"This is a fantastic opportunity for our students majoring in wildlife, fisheries, and conservation to partner with an established and renowned conservation organization in the Endangered Wolf Center," he said.  "Our students are excited to be part of this partnership as it develops and moves forward."

The short documentary details the struggles facing the last remaining wild population of the American red wolf. Once native to Missouri and the entire Southeastern United States, red wolves are now on the brink of extinction, with fewer than 50 left in the wild.

The film is centered on the historic recovery effort in Eastern North Carolina, and documents the multifaceted struggle to reintroduce one of the rarest animals on earth in the face of cultural, economic and biological challenges in North Carolina.

The film director sat down with landowners, writers, scientists, nature centers and concerned citizens to examine the cultural landscape in the region, how the story became urgent, and explore the implications of the changes to come.

Interested individuals may view more information about the film online.

The Endangered Wolf Center in St. Louis, Mo., is the premier wolf conservation, education, reproduction, and research center in the United States. Its mission to preserve and protect Mexican wolves, red wolves and other wild canid species, with purpose and passion, through carefully managed breeding, reintroduction and inspiring education programs.  The Center was founded in 1971 by Marlin Perkins and his wife, Carol. Perkins is best known as the longtime host of television’s “Mutual of Omaha’s Wild Kingdom.” The Endangered Wolf Center is an Association of Zoos and Aquariums (AZA) certified facility and is a 501(C)3 non-profit. For more information on may visit www.endangeredwolfcenter.org. 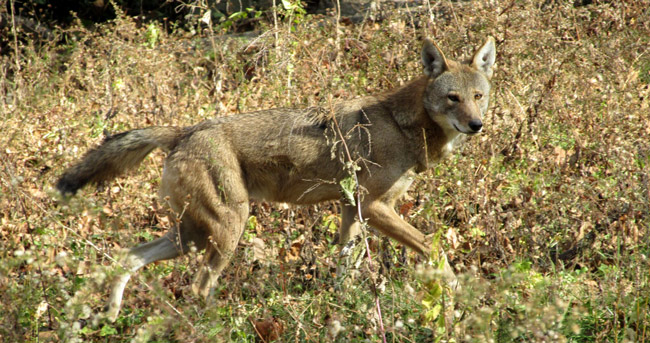