Sound of Natural State to Play along New Route to Stadium

JONESBORO – When one calls "The Sound of the Natural State" a marching band, that description takes on a whole new dimension beginning with Homecoming 2017.

Starting about 4:50 p.m. Saturday, members of The Sound will finish warming up at the band's new practice facility east of The Village, then begin marching to Centennial Bank Stadium for pre-game ceremonies on the field.

The trek measures almost a mile, so lots of Red Wolves and Sound of the Natural State fans who line Olympic Dr. will get to enjoy the band in full cadence as they perform several songs along the way.

"The Sound holds a small pregame rehearsal every game day to warm up, complete a uniform check, and make sure we are the most prepared we can be to give a fantastic pre-game, halftime, and in-game performance," explained Dr. Sarah Labovitz, associate director of bands.  "We have moved to our new and permanent outdoor classroom and we thought we would take advantage of its location."

The days of a simple halftime show are well in the past.

"We want to bring the game-day energy and Red Wolf Pride to those outside the stadium.  Hopefully those that see us and hear us will follow the Sound into the stadium for our pregame performance and be in the stands cheering as our A-State football team runs out of the tunnel."

Labovitz explained there's even more on the musicians' schedule, making it a very busy Saturday.

"We will have a pep band at the band alumni reunion at Cooper Alumni Center, and will play there at 3:30.  A pep band will be playing, as usual, for the Red Wolf Walk that starts at 3:45.  Our game-day rehearsal will start at the new practice field at 4:25."

Marching to the stadium is not a new custom, but it will be significantly different.

"We have always marched to the stadium, but this is the first time from the new location and the first time that the full band will play.  We couldn’t start at the last home game due to it being band day," she added.

"The public is more than welcome to gather along the new marching route.  We will march west down Aggie Road, then follow Olympic Blvd. north to the stadium."

The band will march directly to the field and get positioned for pre-game ceremonies, including the presentation of the 2017 Homecoming Court.

"The entire Sound of the Natural State, with more than 200 students, will march, and the Red Wolves Dancers will be joining us," the director also said. 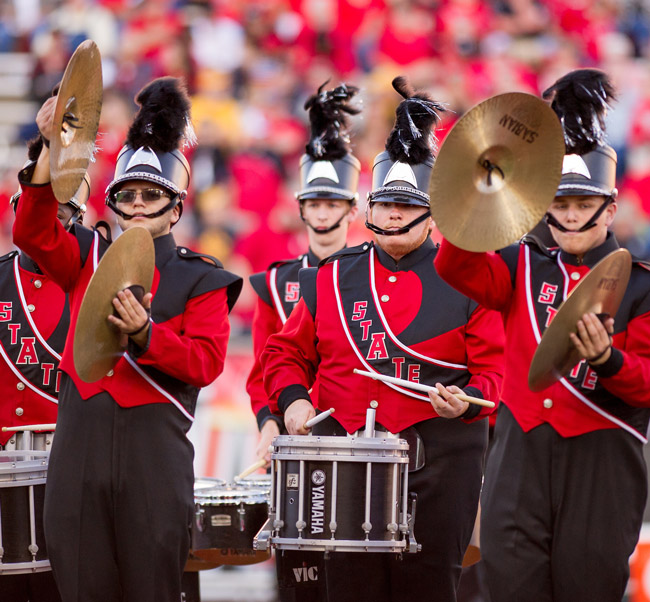 Percussion section members of the Sound of the Natural State