JONESBORO – After making photographs of three different objects at Arkansas State University Museum Thursday, an assemblage of humanities scholars went to work in the Center for Digital Initiatives (CDI) computer lab in the Dean B. Ellis Library.

They are developing and honing their skills for converting the images, made from several viewpoints, to a three-dimensional model that can be used in the virtual world for research, analysis and instruction.

“We’ve been teaching them how to use 3-D modeling software that’s relatively difficult to learn,” explained Dr. Alyson Gill, associate professor of art history at Arkansas State and director of the CDI.

The scholars are on the Arkansas State campus for the “Summer Institute for Advanced Topics in Digital Humanities,” supported by the National Endowment for the Humanities.

Gill and Dr. David Fredrick, associate professor of classical studies and director of humanities at the University of Arkansas, are co-directors of the institute, which continues through next week at Arkansas State before moving to the Center for Advanced Spatial Technologies at UA-Fayetteville for the third week.

The NEH awarded a $198,503 grant to support the institute and its participants, 16 humanities scholars from throughout the United States, and two from the United Kingdom and India.  They are staying in a campus residence hall at A-State, evoking memories of their own experiences as undergraduate students.

Most are university faculty members from as far as Washington, Minnesota and New York, while two, Dr. Eric Cave and Joe Ford, teach at Arkansas State.  Four are working on doctoral degrees and research projects at their respective institutions.

“Arkansas State and the Center for Digital Initiatives, led by Dr. Alyson Gill, have proven to be leaders in this emerging field of research and interpretation,” commented Dr. Tim Hudson, chancellor, who hosted the institute participants during a reception at the Chancellor’s Residence Wednesday evening.  “The work the CDI is doing is innovative and supportive of the university’s mission of educating leaders, enhancing intellectual growth and enriching lives.”

This week, the institute faculty has been making presentations about their own experiences during morning sessions in the Delta Center for Economic Development, then the group works on their projects in the CDI computer lab in the afternoon.  Wednesday’s speaker was Dr. Diana Favro of UCLA, who directed a 2006 NEH institute through which Gill developed her own interest in digital humanities.

“All institute presentations are in person . . . for the participants, it is amazing to have access to top caliber researchers who can spend the day and talk with them and connect with them,” Gill said, explaining that speakers at major conferences often participate only through closed-circuit video.

Gill and the CDI have worked closely with A-State’s Dr. Ruth Hawkins, another of the institute faculty who spoke Thursday, to model the Arkansas Heritage Sites.  To enrich the institute participants’ understanding of the process, they will tour four of the sites: Lakeport Plantation, the Japanese-American Internment Camp at Rohwer, the Johnny Cash Boyhood Home at Dyess, and the Hemingway-Pfeiffer Museum and Education Center at Piggott.

The institute website, Humanitiesheritage.com, includes details about the participating scholars, faculty, schedule and other details.  The CDI is videotaping the presentations for posting to the site, and a public session for participants’ presentations is planned for Friday, June 28, before they leave for Fayetteville.

“We’re also trying to foster some collaboration between groups,” Gill continued.  “Of course, the first collaboration was between Arkansas State and the University of Arkansas, because the grant was co-written by both universities.  We also have all of these scholars here, and we’re hoping they will come together and work on grant proposals in the future as well.”

While enjoying getting acquainted and familiar with Jonesboro, the scholars’ experience thus far has been productive for learning new techniques and talking about their own research projects.

“This institute is really important because it is placing ASU on a national scale for 3-D visualization,” Gill continued, noting its importance to the mission of the Center for Digital Initiatives.  She also noted the extensive support the institute has received, both from members of the community and from personnel in various departments at Arkansas State.

During presentations to civic and community groups, she has found the general public is very interested in the concept of 3-D visualization and how it is incorporated for practical purposes on websites and mobile devices.

Hoping for what she calls a transformative impact like she experienced, Gill emphasized the institute’s potential impact on participants.

“These folks will go back to their classrooms where they have direct impact on all the students they teach.  I think we’re going to have a good ripple effect from this, I’m hoping for that.” 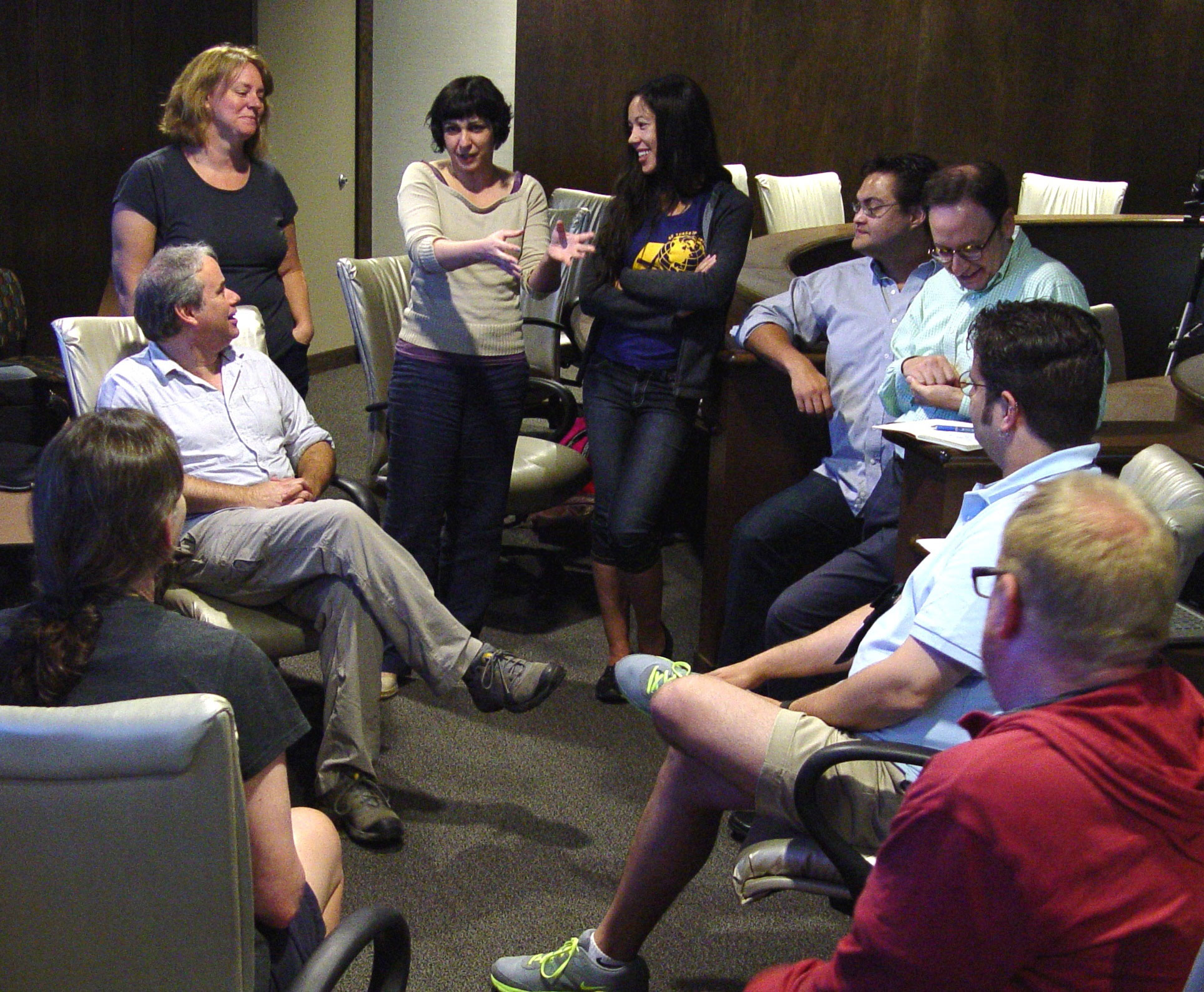 " . . . for the participants, it is amazing to have access to top caliber researchers who can spend the day and talk with them and connect with them,” Gill said . . .
“These folks will go back to their classrooms where they have direct impact on all the students they teach.  I think we’re going to have a good ripple effect from this . . . "

Scholars work on projects at the
Center for Digital Initiatives lab
at Arkansas State.