JONESBORO — An exhibit of photographs that chronicles the lives of Japanese-American internees at Arkansas’ Rohwer relocation camp near the end of World War II is currently on display in San Francisco as part of a ceremony paying tribute to the Military Intelligence Service (MIS) ceremony on Veterans Day. The National Japanese-American Historical Society (NJAHS) is hosting the display at their Presidio location in Building 640. 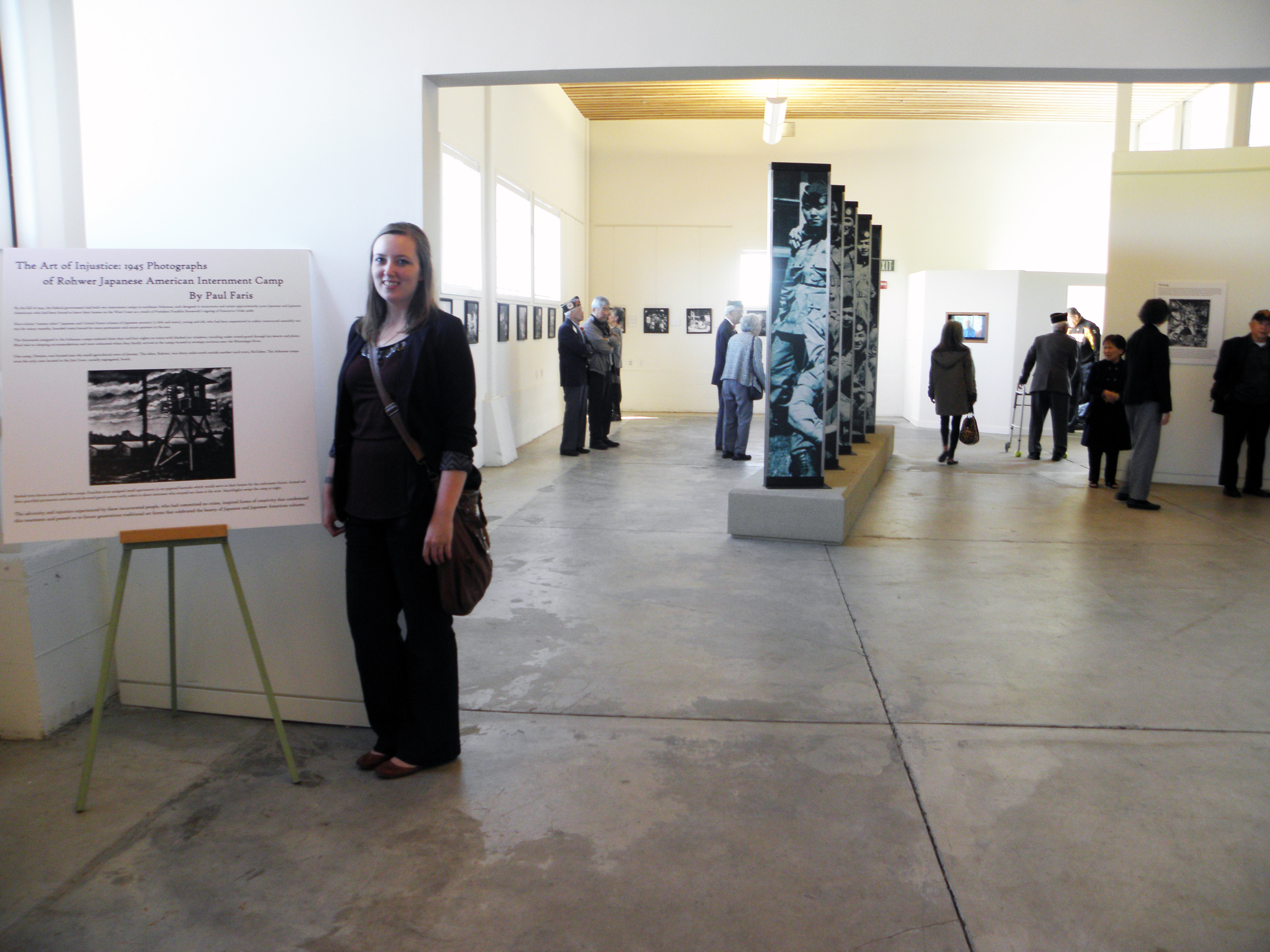 Monica Campbell of Jonesboro, a graduate student in Arkansas State University's history department, stands near the welcome sign at the entrance of the Rohwer Japanese American Relation Camp Photo Exhibition in San Francisco.

The exhibition, featuring black and white photographs taken by Paul Faris, is the work of Dr. Sarah Wilkerson Freeman, history professor at Arkansas State University. Freeman was contacted by a brother and sister whose deceased parents (Paul and Ann Faris) had visited the Rohwer Japanese internment camp in July 1945 and took the photos. The exhibition opened Nov. 15 and runs through April 2015.

“There had been some damage to the MIS building in 2013 and repairs weren’t quite finished. It took a great deal of political effort to get the funding for the NJAHS to open the MIS Museum and have this exhibit,” explained Freeman. “California Congresswoman Nancy Pelosi and retired Senator Daniel Akaka of Hawaii, along with leaders in the National Park Service, were instrumental in accomplishing that goal.

“As a result, the one-year anniversary was attended by high-level dignitaries, such as Pelosi and Akaka, as well as approximately 150 Japanese Americans from the Bay area and at least a dozen WWII veterans who were in the MIS, the 442nd Regimental Combat Team (the segregated Japanese-American regiment and the most decorated of the U.S. regiments of WWII), and the 100th Infantry Battalion. It was an incredible event and we were honored to be part of it.”

On a trip to the west coast during the summer, Freeman scouted places and organizations interested in hosting the exhibit. She scheduled a meeting with Alison Kazuko Sunahara, NJAHS program director, and Sunahara loved the photographs. Following permission to have the showing in the MIS building, the 24-piece exhibit was installed in the Presidio site. Freeman and public history graduate student Monica Campbell, who has worked with the exhibit for over a year, traveled to San Francisco to install the show.

“We worked hard for two days to create a show that fit within the context of the museum. We were extremely pleased by the response, especially when people who had been in the Arkansas camps approached us and told stories of their lives and experiences during those years. The ceremony was beautiful and heartfelt,” Freeman continued.

According to Freeman, the exhibition was designed to bring the Arkansas side of Japanese American internment history into the larger narrative. Paul and Ann Faris were initially invited in 1945 to photograph artwork produced by camp internees for ‘Beauty Behind Barbed Wire: The Arts of the Japanese in Our War Relocation Camps' by Allen H. Eaton. But they also visited with the artists and photographed the interior and outdoor spaces and cemetery. Ann Faris interviewed many who were photographed, kept good notes, and later tried to keep up with the internees after they left the camp.

Located in Desha County in southeast Arkansas, the Rohwer Relocation Center housed more than 8,000 Japanese-American citizens as a result of President Franklin Roosevelt’s Executive Order 9066 requiring their internment in the months following the attack on Pearl Harbor. Rohwer was one of two relocation centers in Arkansas during the war and is the easternmost internment campsite of the 10 in the United States.

“By bringing the photos to light, those involved in the project hope to preserve something of the visual evidence of the unconstitutional treatment of Japanese-Americans while demythologizing the camp experience,” explained Freeman. “There is a lot of misinformation about the relocation experience. A great deal of collective effort is being directed by Japanese-Americans and others towards ensuring that the histories of those whose lives were so painfully disrupted will be preserved for future generations to study. This collection adds another perspective to the history of internment.”