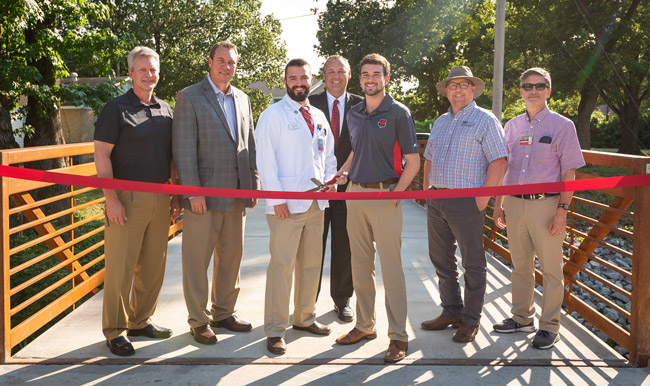 The ribbon cutting Wednesday was attended by Arkansas Highway Commissioner Alec Farmer of Jonesboro along with Arkansas State officials and students from both A-State and the NYIT College of Osteopathic Medicine.

“Creating a safe environment for our students to move around the campus is one of our top priorities,” Damphousse said.  “We know this generation of students enjoys having walkable, bikeable living spaces.  We also want to encourage exercise and provide a place where the entire community – not just our students – can walk, run or bike.  We want to do our part to enhance the quality of life for the A-State campus and Jonesboro.”

Damphousse commended the cooperation of ArDOT and the forward-thinking by key members of the A-State Facilities Management team for the project.

“ArDOT was pivotal in this entire project for the west side of campus – the overpass, the road and the multiuse path," Damphousse said.  “We wanted to innovate and ArDOT helped us along the way.”

Farmer, an Arkansas State graduate and Jonesboro resident, explained how excess funding from a U.S. Congressional earmark for the Marion Barry Parkway Overpass was coupled with other grants to complete West University Loop, the vehicle road that travels under the bridge and provides a western exit from campus to Aggie Road, and the new multiuse path.

“The project is an excellent example of what partnering can achieve; in this case among ArDOT, our congressional delegation, and the university can have in improving the quality of life and safety of our community,” Farmer said.

Instead of sidewalks on both sides of a standard roadway with bike lanes, Facilities Management suggested the construction of the separated multiuse path that could accommodate both pedestrians and cyclists but with the added protection of a grass buffer zone.  The six-foot buffer allows for the installation of lighting for both the road and multiuse path.

The section opened Wednesday parallels Aggie Road on the west side of campus heading toward downtown Jonesboro, then turns south and east along University Loop.  It includes the first pedestrian and cyclist bridge on campus, crossing a lateral of Turtle Creek behind The Circle housing complex.

“As an exercise science major, I do value fitness of all levels for our students,” A-State Student Government Association President Jon Mark Horton said.  “This is an outstanding opportunity for our campus.  For our students to have this to run in the morning or afternoon is huge.  Most of our students are commuters.  To have this path as a way for them to get to campus and between buildings makes this a safer campus.  That’s what we are about at Arkansas State; putting our students first.”

In addition to providing a safer, separated path for vulnerable commuters onto campus from the west, the path includes new lighting which will be installed in two phases.  The first phase is underway and stretches along Aggie Road from The Circle into the academic core.

“We make this trek up to Wilson Hall for classes, for labs, for study sessions and we go all throughout the day, and even all throughout the night, seven days a week,” NYIT Student Government Vice President Colton Eubanks.  “Having a safer path for us to get there makes all the students at NYITCOM feel better.”

A large percentage of the DO school students live at The Circle, and use the portion of the path that parallels Aggie Road to commute to class.

“On behalf of all of the students of NYITCOM, I want to especially say thanks for the new lighting system,” Eubanks continued.  “Obviously if you’re walking home at 2 a.m. it makes a huge difference.  Everyone who lives in The Circle, it lifts a burden off our shoulders and we feel a lot safer.”

Designed as a part of the university’s Pedestrian and Cyclist (PAC) Paths, the addition brings the overall system close to 10 miles of combined bicycle lanes, shared use paths and shared use roads.

It is the second purpose-built path, and the longest to date on campus at three-fourths of a mile.  The first path was composed of two sections constructed in 2012 behind Sorority Row and in front of the Honors Learning-Living Community that combined were three-tenths of a mile.

A Transportation Alternatives Grant from the Arkansas Department of Transportation in the amount of $500,000, matched with $125,000 by Arkansas State, was utilized to complete the trail.

Arkansas State was selected as a Bicycle Friendly University in 2014, the first in the state to earn the designation by the League of American Bicyclists.  Three other Arkansas universities have joined A-State with the BFU designation.

The campus master bicycle path plan includes further on-road and separated-path expansion that would complete a campus loop and provide access points for future City of Jonesboro plans to connect at the edge of the university.