JONESBORO, Ark. — Arkansas State University’s U. S. Army Reserve Officers’ Training Corps (ROTC) Red Wolf Battalion is marking an important milestone this week by acknowledging the program’s 80th birthday. The program was established Jan. 20, 1936, and has progressed in its mission to build future officer leadership in the U.S. Army. 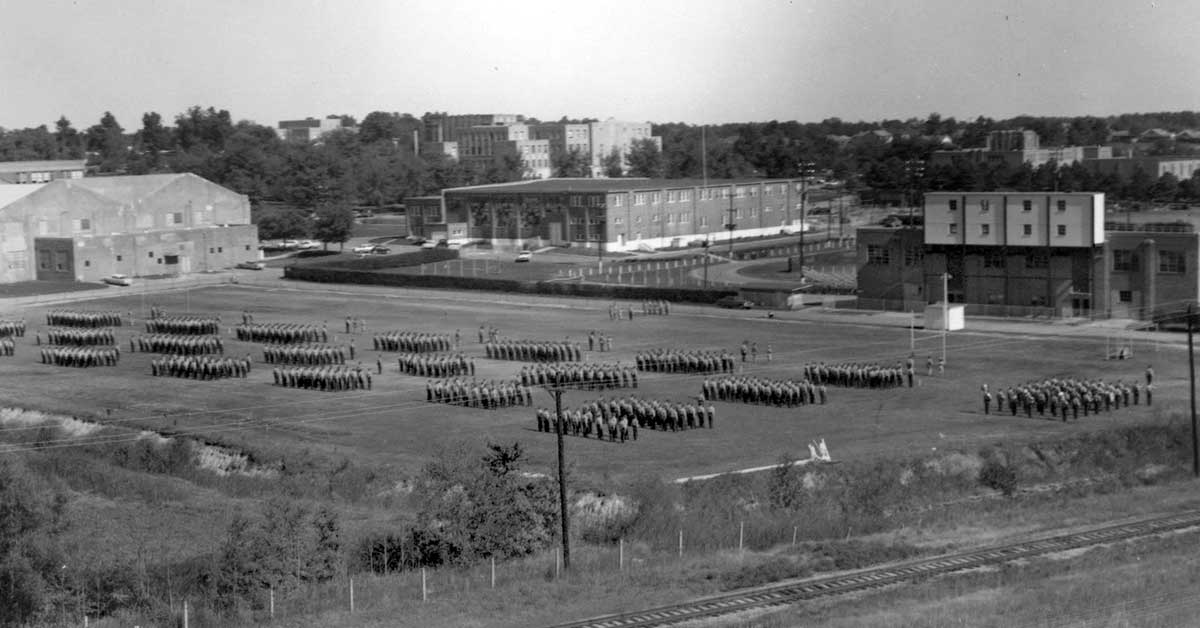 ROTC annual formal inspection (AFI), about 1965, at the drill field where the Health, Physical Education and Sport Sciences Building now stands.  Wilson Hall and the Computer Science and Mathematics Building are among the buildings in the background.

As the program continues its journey forward, it owns a powerful link from the past to the present. In fact, it is also the 100th year anniversaries for ROTC programs across the nation.

“When I got to Arkansas State, I learned very quickly that the ROTC program here has unprecedented support from the university and community,” said Lt. Col. Mike Fellure, professor of Military Science who joined the faculty in July 2015. “That’s not common at other places.”

Fellure said that plans are underway for an 80th anniversary reunion this fall for alumni, families and supporters of A-State ROTC. “We hope to have graduates from every year attend with their families.”

“Arkansas State University is extremely proud of its ROTC program and heritage as evidenced by our support,” said retired Lt. Col. Bob Schoenborn. “It holds a unique position, not only in the state and region, but within the U.S.”

A-State ROTC has produced cadets with outstanding leadership skills who have risen to prominence, both in and outside of the Army. Through donations, the Hall of Heroes was established to pay tribute to A-State’s ROTC alumni who have distinguished themselves through heroic service, government service and outstanding representation of the university. The newest members, all alumni, recognized in October 2015, include retired Brig. Gen. Frank Toney, retired Col. Vance Sales Jr., Schoenborn and retired Lt. Col. Laddie Logan (honored posthumously).

Schoenborn continued, “In all, 77 individuals have been inducted in recognition for their achievements, either in terms of valor or in terms of achievement in the civilian sector.”

Some became senators, statesmen, and corporate businessmen. Today, the A-State Red Wolf Battalion, composed of outstanding men and women with various backgrounds and interests, is as strong as ever.

ROTC at Arkansas State enjoys a long praiseworthy history, commissioning approximately 1,786 high-quality leaders for the nation, state and community since 1936. In addition, the Military Science Building is the third largest facility among the some 275 host ROTC programs in the country and among the few who take advantage of university support through a team-building development obstacle course, a multi-faceted rappel tower, an indoor shooting range (and varsity rifle team) and the only program outside a military school to offer an entire resident building exclusively utilized for cadets.

A-State’s ROTC program began as a mandatory basic course with instruction for all male students. In 1971, the mandatory feature was discontinued, and it was also the first time Arkansas State female students were allowed to participate. Today, the program is now incentive driven for those who wish to become commissioned officers.

In September 1952, Arkansas State lost affiliation with the artillery branch when selected as one of 30 institutions to test the general military science curriculum that continues even today. This curriculum allows those commissioned at A-State the opportunity to serve in any branch of the U.S. Army, depending on their personal desire and qualifications, and the needs of the Army.

Arkansas State’s ROTC also enjoys tremendous support from the state and federal levels of legislators, including U.S. Senators John Boozman and Tom Cotton, former Senator Mark Pryor and First District Congressman Rick Crawford of Arkansas. In December 2013, the ASU Board of Trustees voted to offer in-state tuition rates to all U.S. Army ROTC cadets as part of its action in 2011 to offer the rates to all persons serving in the U.S. military.

The ROTC program has enjoyed a longtime partnership with ASU-Beebe and Williams Baptist College. Fellure said the partnerships manifest themselves in A-State providing class instruction at those campuses. In 2014, A-State ROTC and Harding University forged a partnership to help establish military science courses on Harding’s campus in Searcy.

That same year, the family of the late John Horn expanded a scholarship in the department to two scholarships, valued at $7,500, one each awarded to an MS III (Junior) and MS IV (senior) cadet. Horn was in the very first Arkansas State ROTC class to receive commissions (1938) and is a member of the A-State ROTC Hall of Heroes. He was born in Muldrow, Okla., in 1918. In addition to receiving his ROTC commission, he graduated with a bachelor of science in chemistry and commission in the Field Artillery. The John Horn ROTC Scholarship was endowed in 1996.

“Our future is strong and viable,” concluded Fellure. “We are looking forward to developing officers for many, many years and decades to come.”