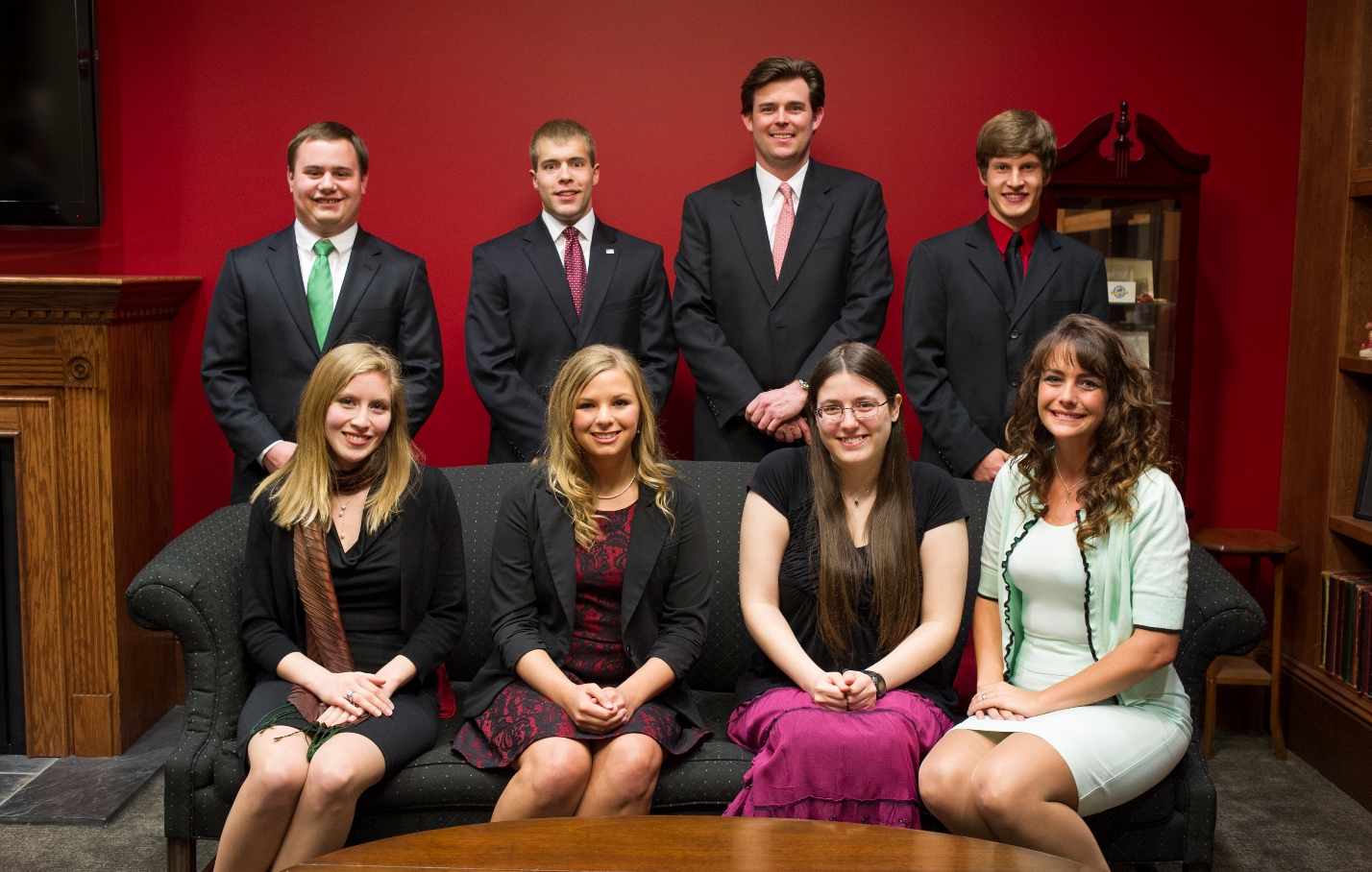 
JONESBORO – At the 80th annual Student Honors Awards Ceremony this evening, a descendent of the Wilson family, a name synonymous with Arkansas State University’s long history, presented the institution’s highest award to the most outstanding graduating student of 2013.

Hunter Petrus of Jonesboro, a senior, received the R. E. Lee Wilson Award for 2013, based on his exemplary record of citizenship, scholarship and service during his student career at Arkansas State. While working toward his bachelor’s degree in business management and marketing, Petrus was best known across campus as president of the Student Government Association for two terms.

The award honors the memory of R. E. Lee Wilson of Wilson, Ark., who was a member of the institution’s Board of Trustees from 1917 until 1933.

“Mr. Wilson believed strongly in higher education and was instrumental in the growth and development of this campus,” said Cristian Murdock, vice chancellor for university advancement, who emceed the ceremony. The university’s oldest building, Wilson Hall, is named for its early benefactor.

A great-great-grandson of R.E. Lee Wilson, Perry Wilson of Little Rock, was present to announce the winner of the Wilson Award, in keeping with a tradition his family established more than three decades ago.

“My family and I are honored our name is affiliated with one of Arkansas State University’s longest traditions, that of recognizing its outstanding graduates,” Wilson said. “I know my great-great-grandfather would be proud to see the type of students Arkansas State continues to educate after its first century.”

Arkansas State University has been giving the Wilson Award since 1934. The recipient is chosen from among the recipients of the Distinguished Service Award, which is given to the university’s most outstanding graduates.

“One of the most difficult jobs on campus is performed by the Student Honors Awards Selection Committee, who must choose just one individual to honor with the Wilson Award, an individual who best exemplifies qualities of character, determination, involvement and academic achievement,” Wilson added, before announcing that this year’s deserving recipient is Hunter Petrus.

The ceremony for recipients of the Wilson Award and the Distinguished Service awards comes at the beginning of A-State’s Convocation of Scholars, an annual celebration of academic achievement that includes college and departmental awards and recognition events.

Wilson Award winners are honored in a permanent display outside Centennial Hall in the Carl R. Reng Student Union. Previous winners of the award joined to form the Wilson Fellows, a chapter within the ASU Alumni Association. As a group, they contribute resources to fund an endowment, helping Wilson Award winners to pursue post-graduate education. They presented a $1,500 fellowship to Petrus, their newest member, to be used for furthering his education.

Distinguished Service Awards are presented annually to graduating seniors who, through their service to ASU and its student body, have demonstrated outstanding qualities of leadership and citizenship. Nominations for these prestigious awards are submitted by faculty, staff, advisers to student organizations, and other members of the ASU community. A committee comprised of students, faculty, staff, and past Wilson Award recipients make the final selections.

The Selection Committee gives strongest consideration to leadership in organizations and activities of general campus significance. All of the students have provided countless hours of service to the community, their classmates, their departments and colleges, and to Arkansas State University.

Recipients of the Distinguished Service Awards and a summary of their achievements are (in alphabetical order):

Courtney Bolin of Monticello will graduate in May with a bachelor of science degree in marketing through the College of Business. Her advisor is Dr. Shane Hunt. She was nominated by Dr. Faye K. Cocchiara.

Courtney's academic achievements include being named to Chancellor's List and Honor’s Directors List, scholarships including the Talbert-Carrothers, and College of Business scholarships, the College of Business Dean’s Award and the Distinguished Governor’s Scholar award. She served as a two-term secretary of the Student Government Association, a member of the ASU Shared Governance Library Committee and Action Fund Committee, vice-president of recruitment for the National Panhellenic Conference, and was selected as both a Global Student Leader and Chancellor’s Ambassador.

In her letters of recommendation for this award, it was said, "I was consistently impressed with Courtney’s work ethic and how she approached my classes … she has the rare quality of being incredibly good at what she does while also being a great person to work with … she demonstrates a life of service through her many volunteer efforts for local charities."

Courtney is the daughter of Tammy Bolin of Monticello.

Cheyenne Gerdes of Conway will graduate in May with a bachelor of science degree in wildlife ecology and management through the College of Sciences and Mathematics. Her advisor is Dr. Thomas Risch, who nominated her for this award.

Cheyenne's academic achievements include receiving the ASU Chancellor’s Scholarship, Arkansas Challenge Scholarship, an ADHE Student Undergraduate Research Fellowship and being named to the Chancellor’s List. She has also been accepted into the Ronald E. McNair Post-Baccalaureate Achievement Program. Cheyenne has presented numerous research projects at conferences throughout the region as well as in San Juan, Puerto Rico. She served in numerous capacities on the Residence Life Green Team, the Wildlife and Fisheries Society and was a founding member of the Natural History Collections Curation Club.

In letters of recommendation for this award, it was said, "Cheyenne is proving to be a leader among her peers … is a stellar student committed to learning and taking advantage of research opportunities … Cheyenne is exceptional in her service to ASU."

Cheyenne will attend graduate school at the University of Georgia Forest Resources program. She is the daughter of Mark and Toni Gerdes of Conway.

Zach Marsh of Pearcy/Hot Springs will graduate in May with a bachelor of science degree in biology/pre-professional emphasis through the College of Sciences and Mathematics. He was nominated for this award by Rebecca Oliver, and his advisors are Dr. Tanja McKay and Rebecca Oliver.

Zach's academic achievements include being named to the Chancellor’s List and Honors Director’s List all seven semesters. He received the Chancellor’s Scholarship, the Arkansas Lottery Scholarship, the Arkansas Biosciences Institute Biotechnology Internship and the Arkansas Student Undergraduate Research Fellowship. He also served Volunteer ASU as chair for Alternative Spring Break, as a Global Student Leader, on the Student Union Advisory Council, the Honors College Association, and in numerous capacities for the Student Government Association.

In letters of recommendation for this award, it was said, "Zach is extremely motivated and knows what it takes to be successful … one of the most outstanding students I have had the pleasure to work with in my 16 years at ASU."

Zach is the son of Danny and Donna Marsh of Pearcy/Hot Springs.

Arielle Moss of Batesville will graduate in May with a bachelor of science degree in biology, pre-professional emphasis, through the College of Sciences and Mathematics. Her advisors are Dr. Ronald Johnson and Patience Bartunek, and she was nominated for this award by Patience Bartunek.

In letters of recommendation for this award, it was said, "Arielle has contributed greatly to ASU through her hard work, dedication and tireless volunteer efforts … good student with an exceptional personality and is a delight to work with … an amazing student, leader and person."

Arielle is the daughter of Michael and Deborah Moss of Batesville.

Hunter Petrus of Jonesboro will graduate in May with a bachelor of science degree in business management and marketing with an emphasis in marketing management through the College of Business. His advisor is Dr. Shane Hunt, and Dr. Rick Stripling nominated him for this award.

His academic achievements include being named to the Chancellor’s List, recipient of the Vice Chancellor’s Scholarship, the J.A. Riggs Undergraduate Scholarship, the Arkansas Lottery Scholarship and a finalist for the Sigma Chi Scott Hale Scholarship. He is a two-term president of the Student Government Association as well as a freshman senator, held numerous chairs and committee positions in the Sigma Chi Fraternity, was a Global Student Leader, was the Head Orientation Leader, served as Director of Student Union Events and served on numerous university committees.

In letters of recommendation for this award, it was said, "Hunter thinks and plans for the present and future good of those he serves … gratefully acknowledges the contributions of others, which makes him all the more capable as a leader … embodies the spirit of the award."

Hunter is the son of David and Donna Petrus of Jonesboro.

Andrew Todd of Fort Smith will graduate in May with a bachelor of science degree in accounting and finance through the College of Sciences and Mathematics. His advisor is Dr. Jim Washam, and he was nominated for this award by Dr. Patricia Robertson.

Andrew's academic achievements include being named to the Chancellor’s List and Honor’s College Director’s List, a recipient of the University Honors Scholarship, College of Business Dean’s Award and Senior Honors Student Award, and was selected for Who’s Who in American Colleges and Universities. He completed two internships for U.S. Senator John Boozman, served multiple offices for Phi Beta Lambda, participated on the ASU Moot Court Team, served on the Dean’s Student Advisory Council, and is an Eagle Scout.

In letters of recommendation for this award, it was said, "setting an example through his leadership … exemplary academic abilities, remarkable character, community service and love for Arkansas State University … great servant leader through example."

Andrew is the son of Larry and Suzette Todd of Fort Smith.

Luna Unnold-Cofre of Jonesboro will graduate in May with bachelor of arts and bachelor of science degrees in international business and political science through the College of Business and College of Humanities and Social Sciences. Her advisors are Dr. Clint Relyea and Dr. Rollin Tusalem, and she was nominated for this award by Dr. Jim Washam.

Luna's academic achievements include being named to the Chancellor’s List and Honors Director’s List, a Top-Ten Student Ambassador in the United States for Spain, College of Business Dean’s Award for Academic Excellence and a Who’s Who Among Students in American Universities and Colleges recipient. She serves as a Chancellor’s Ambassador, a Community Outreach Volunteer, a volunteer interpreter for the Arkansas Mission of Mercy, a member of the Model United Nations Club, and a student ambassador for the Embassy of Spain.

In letters of recommendation for this award, it was said, "Remarkable combination of intelligence, linguistic and personal skills, leadership potential and the dedication to making a difference in the world … she has not just experienced the wonders our world offers – she has embraced them."

Luna is the daughter of Francisco Cofre and Yvonne Unnold of Jonesboro.