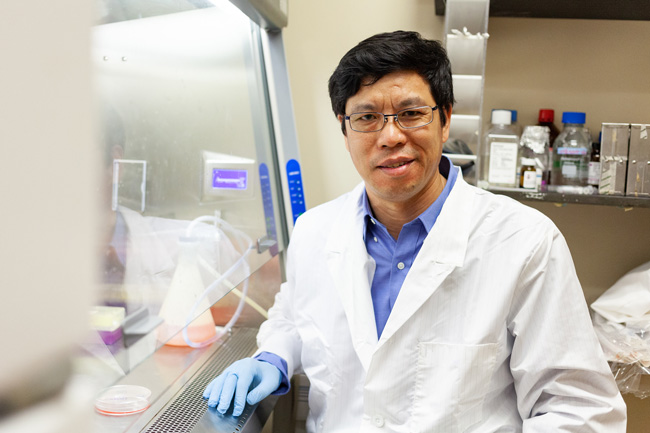 JONESBORO – Dr. Guolei (Jason) Zhou, associate professor of cell and cancer biology, and his research group at Arkansas State University recently received a grant from the National Institutes of Health (NIH) to continue their work.

With the new funding, from the National Institute of General Medical Sciences (NIGMS), a division of NIH, Zhou and his associates are investigating the functions of a cytoskeletal protein, CAP1, in cell adhesion and migration, and how it is regulated by signal molecules the cell receives and utilizes.

This $419,190 award for the three-year project is titled "Phosphor-regulation of CAP1 Functions in Cell Adhesion and Migration."

As Zhou explains it, “These cell functions are critical for normal biological processes, such as embryonic development, wound healing and immune response.  When lost proper regulation, they can cause a number of pathological conditions, including cancer metastasis, the spread of cancer to other parts of the body, which accounts for the death of most cancer patients.”

Over the last decade, mounting evidence has implicated CAP1 in a growing list of human cancers, including breast, pancreatic and lung cancer.

"In order to realize the translational potential of the protein in the treatment of human cancers, more knowledge of its regulation mechanism is imperative," he continued.

Regulation of CAP1 had remained an uncharted area until the Zhou group identified the mechanism, where certain cell signals add phosphate groups (called phosphorylation) to two specific amino acids on CAP1, as well as removing them, to control its functions.

“These findings link relevant cell signals to important cancer cell functions through CAP1, and the mechanistic insights may ultimately open up avenues for targeting these cell signals in developing novel therapeutic strategies.  This is advantageous because cell signals are far more suitable and predominant drug targets,” said Zhou.

The group found in their recent studies that both CAP1 and its phosphorylation control the key cell functions in breast and pancreatic cancer.

“Our research is at the interface of cell biology and cancer-focused biomedical sciences,” he said. “These findings extend our knowledge on how the biological systems function, by linking the cell signaling to the cell functions that depend on the actin cytoskeleton.  This is an important area in both the life and biomedical sciences that impacts multiple disciplines. This type of research may also lead to drug target development, which is often the first step in new drug discovery that is widely pursued in both pharmaceutical industry and academia.”

Since joining the A-State faculty in 2010, Zhou and his group have made key contributions to the understanding of cellular functions of CAP1, its regulation mechanisms, and roles in breast and pancreatic cancer. His group has been among the most accomplished few over the last five to six years out of 20 or so that study the protein globally, supported by uninterrupted extramural funding.

The Zhou laboratory, located in the Arkansas Biosciences Institute (ABI), has provided excellent research opportunities for graduate and undergraduate students. Students are integral parts of the program, and lead authors and co-authors in research articles and invited reviews published in highly respected scientific journals in the field, including Journal of Cell Science, the Journal of Biological Chemistry, Scientific Reports and Cell Adhesion & Migration.