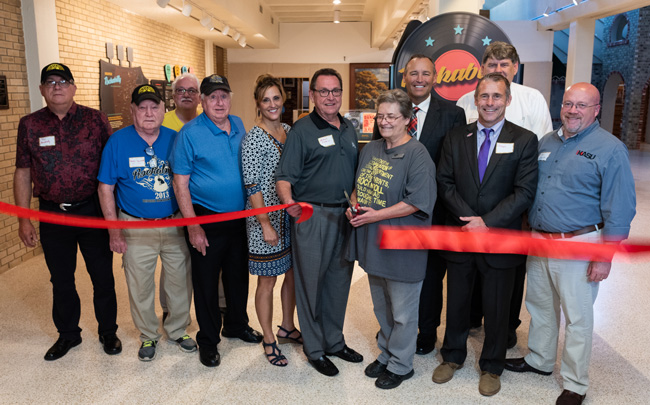 Dr. Marti Allen, director of the museum, discussed highlights of the exhibit.

"Rockabilly is an early form of rock 'n' roll music that grew up in the Memphis and Northeast Arkansas region," Allen said.  "Notable music historians agree that early rock 'n' roll revolutionized music, American culture and, some say, the world."

Rockabilly has stood the test of time, she explained.  After it fell out of vogue in American mainstream music around 1960, " . . . it went on to influence The Beatles, launch a European rockabilly revival in the 1980s and 1990s, and make a spectacular new century comeback in America by 2000."

Allen acknowledged that iconic rockabilly music is irreverent, provocative and "in your face," musical traits that many people love today, but that was not the general consensus in the 1950s.  It outraged the conservative majority, who feared it would corrupt their children . . . and that made it all the more attractive to teenagers, an emerging demographic that would become a major political and economic force in the 1960s.

"The human story behind Rockabilly is intense. It reflects the era in which it developed — the post-World War II era.  Things were very hard on rural populations, both black and white, who lost their livelihoods on farms due to mechanization," Allen continued.  "As they struggled in miserable conditions with racism rampant all around, they reveled in a rich repertoire of music at home, work, and church. Rockabilly was the product of these disenfranchised people in rural America. The bios of our rockabillies show this."

Rockabilly both reflects and causes one to reflect upon subjects that remain relevant today.

"The music is imprinted with sentiments of latent, social discontent and intergenerational friction that came to term in the 1960s with the Civil Rights Movement, the sexual revolution, and the emergence of the 'Me Generation,' " the museum director and exhibit producer added.  "This exhibit, which celebrates rockabilly and rural America, will connect Northeast Arkansans with significant but little-known aspects of their history and, we think, instill pride of place."