Memories Abound for Siblings Ahead of ‘Cash Homecoming’

It's an old adage that often holds true, but for Joanne and Tommy Cash, this year's Johnny Cash Heritage Festival provides an opportunity to prove the old saying wrong.

Scheduled for Oct. 19-21 in Dyess, the Johnny Cash Heritage Festival will include a concert featuring Joanne and Tommy Cash.   The concert, which is being billed as a "Cash Homecoming," will be held in the former cotton field adjacent to the restored Johnny Cash Boyhood Home, and will take place Oct. 21, beginning at 1:30 p.m.

Other concerts that day include a 12:15 p.m. performance by country music artist Buddy Jewell, and performances beginning at 3 p.m. by Grammy Award-winners Rosanne Cash and Kris Kristofferson.

"It's really mind-boggling that this would happen all these years after Mama and Daddy moved there in 1935," said Tommy.  "We are just really excited about it and looking forward to having the show and having all the people come and enjoy the Cash heritage."

The Cash family moved to the home when Johnny was three years old, and he lived there until he graduated high school in 1950.

The house was part of a community established by President Franklin D. Roosevelt in the 1930s as a Depression-era agricultural resettlement colony. Part of the New Deal program, it provided an opportunity for destitute farmers, who were advanced 20 or 40 acres of farmland, a mule, a small home and money to buy food and plant crops, with the understanding that if they were successful they'd pay back the government.

"They say you can't go back, but I am," said Joanne.  "Tommy and I are going back because we can walk into that house.  I can walk through the house and walk through the bedrooms where we slept and walk in the kitchen where I have watched Mama hundreds of times cook from scratch a meal to feed seven children."

Tommy, the youngest of the seven Cash children, echoed the sentiments of his sister, who was the sixth child born to the family.

"The first time I went back to the house after it was totally renovated, it took my breath, just to see what it looked like when Mama and Daddy first moved there," said Tommy.  "It's a real honor to have this happen with our family.  I think my brother Johnny deserved this and I think he would approve of everything that is being done in his name."

"It's bittersweet," added Joanne.  "Sweet because of the precious memories of Mama and Daddy working so hard to raise a family, and bitter because they are not there anymore and everything's changed."

Both of the two surviving Cash children agreed that they never dreamed while growing up in the home that anything on the scale of the Johnny Cash Heritage Festival would ever be held on the property.

"I know when I am standing onstage and see the old home place, it probably will bring me to tears because it's just awesome," said Tommy.  "It's unbelievable and I hope everybody will come out and enjoy the show...it is going to be one of the big thrills of my life.  I know my niece, Rosanne, and my sister Joanne, and Kris Kristofferson are thrilled to be on the show and be part of it."

"I don't know how I am going to feel, but I think I am going to cry," Joanne added.  "It's a point in time that I would have never dreamed could have happened.  I can visualize Mama coming out and sitting on the porch and watching it, because she loved to hear Johnny and Tommy and me sing.

"It's my life," she continued.  "I lived the first 17 years of my life in that house, and that was home.  Our life was hard work, a whole lot of love, and just helping each other and encouraging each other."

Joanne said that hard work was not only a way of life for the family, but a reflection of her father's beliefs.

"Daddy's philosophy in life was that it's a gift from God to get up and go out and work hard and earn a living for your family," she explained.  "He really put that philosophy into practice every day; he was a very hard-working cotton farmer, and we all worked hard in those cotton fields.

"I want the people sitting out there listening to this concert to know that we are a family, and Johnny included, we are very strong Christians," she continued.

"Live your life, and live it right...that's what I want people to see in Tommy, Rosanne and me.  I want them to realize that Johnny was raised humbly.  He learned, and we learned that the way to live is to earn your way and not depend on other people.  It will make you feel good to earn your own way.  Serve the Lord, be real, be honest and help each other."

Joanne has a gospel music ministry at the Nashville Cowboy Church, which she co-founded with her husband, Dr. Harry Yates.  Tommy is a frequent performer in concerts around the world.

Along with the Saturday afternoon field performances, the three-day festival will include a symposium from Thursday afternoon through Saturday morning in the Dyess Colony Circle, regional music in the Colony Circle on Thursday and Friday nights, a Memories of a Lifetime oral history project, food vendors, arts and crafts booths, and demonstrations throughout the three days.

The idea for a heritage festival was born after the immensely successful slate of music concerts that began in 2011 at the A-State Convocation Center in Jonesboro honoring Johnny Cash and benefitting restoration of his boyhood home. The next phase of the project will include rebuilding the outbuildings at the Cash farmstead, including the barn, smokehouse, chicken coop, and privy.

All of the Saturday afternoon performances are included in the price of the inaugural concert ticket. Ticket holders also will have access throughout the afternoon to food vendors, arts and crafts booths, and artists’ merchandise. Tickets are on sale now and available online, http://www.AState.edu/tickets, or at the Central Box Office on the A-State campus (Lower Red Entrance), or by calling 870-972-2781 or 800-745-3000. VIP tickets priced at $100 are sold out, but $50 chair seating and $25 tickets (bring your own chairs or blankets) remain on sale. 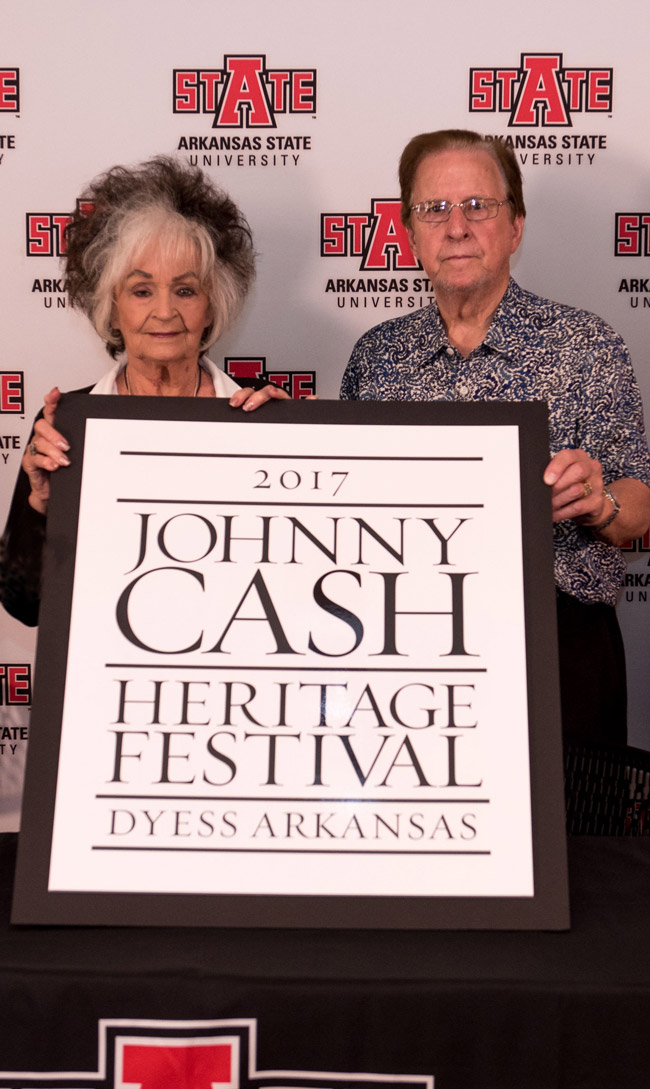