The 200-pound alabaster stone sculpture of a red wolf and her pup is part of a collection created and owned by Weiler Woods for Wildlife and will be displayed at sites in Jonesboro – initially the BAM – for the next two years. The permanent home will be at the North Carolina Zoo, and A-State will then display a casting of the original sculpture. 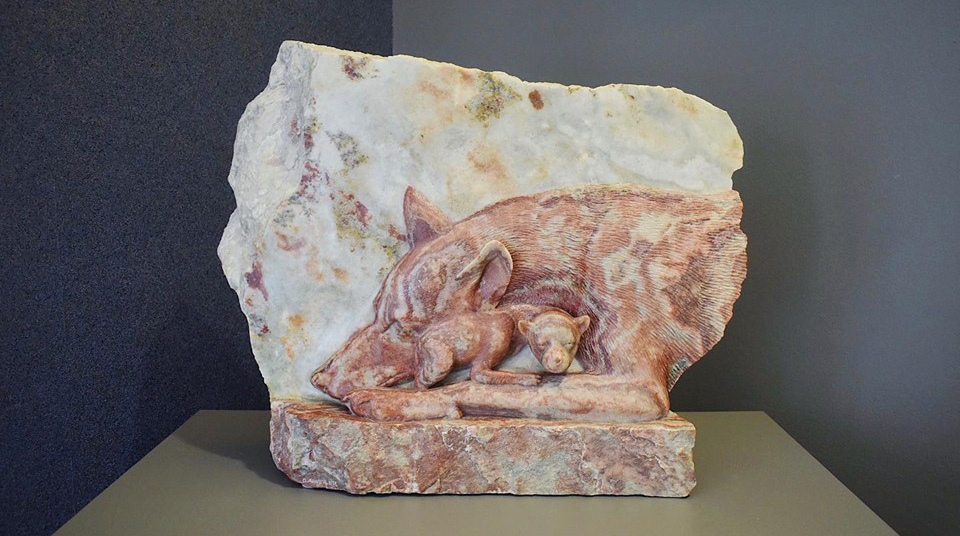 Weiler and his wife, Loti Woods, use his wildlife sculptures to raise awareness and funding for endangered animals through the world. They describe the work as their life mission.

“Loti and I are thrilled to be bringing more awareness to red wolves in partnership with A-State using my sculpture,” Weiler said. “We’ve found that art touches your soul in a special way and red wolves need all of us to become ambassadors.”

Two national leaders in red wolf conservation joined Weiler and Woods at the presentation: Chris Lasher of the North Carolina Zoo, who is coordinator of the Association of Zoos and Aquariums Red Wolf Species Survival Plan (SSP) in partnership with U.S. Fish and Wildlife Service, and Regina Mossotti of the Endangered Wolf Center in St. Louis, vice coordinator of the SSP.

“We’re grateful to Dale and Loti for including the red wolves in their remarkable wildlife collection,” Lasher said. “It’s fitting that this newest sculpture would debut at Arkansas State, which has taken on a major role in red wolf education and research. These partnerships across the country are critical to our conservation success.”

Lasher said 255 red wolves live in captivity at 41 facilities across the country that participate in the Red Wolf SSP, and only 20 to 25 live in the wild in North Carolina as part of the U.S. Fish and Wildlife Service recovery plan.  The SSP wants to add 50 red wolf enclosures at existing or new facilities to support population growth, maintain genetic diversity and to assist with future reintroduction efforts to restore this critically endangered species on the American landscape.

“Arkansas State’s vision for an education, research and breeding facility at Craighead Park in Jonesboro is significant and important to the national recovery efforts,” Lasher said. “The SSP applauds and supports this initiative, and I’m excited about the opportunities for A-State students, faculty and the local community.”

A-State Chancellor Kelly Damphousse thanked the SSP and U.S. Fish and Wildlife Service for their partnerships and praised the efforts of Weiler.

“We say that every red wolf counts at Arkansas State University, and we’re honored that Dale and Loti would choose our campus to unveil this beautiful and meaningful artwork to help share the story of the American red wolf,” Damphousse said. “We’re excited about the growing role of A-State faculty, staff, and students in this national conservation effort, and I’m proud of our students for embracing this initiative with the creation of Red Wolves for Red Wolves.”

Damphousse also expressed appreciation for the campus leadership of Dr. Tom Risch, Vice Provost for Research & Technology Transfer and Executive Director of Arkansas Biosciences Institute, and Tracy Klotz, instructor in the Biology Department who processes and maintains all the red wolf specimens that come from around the country to A-State’s Arkansas Center for Biodiversity Collections.

Weiler said he fell in love with nature while camping and fly fishing across North America. He flew A-4’s in the Naval Air Command and served aboard the USS Kitty Hawk in Vietnam. He’s both an artist and an engineer, and he spent 30 years in management consulting. His additional work can be seen at www.weilerwoodsforwildlife.com.