How one identified Jim and Wanda Lee Vaughn depended on how one came to know them, whether it was through their professional careers, their passion for the arts and culture, their enthusiasm for athletic competition involving A-State, or just their personal friendship.

Inducted in 1999 into the Legacy Society, for those who have made planned gifts to Arkansas State University, the Vaughns so strongly believed in the importance of higher education and its potential to positively impact young people's lives, they decided to leave a major portion of their estate to A-State.

This is the largest such gift in the institution's history.  At final distribution, the unrestricted estate gift to the Arkansas State University Foundation Inc. is expected to be $3.69 million.

"Generations of A-State students will enjoy enriched lives because of the educational opportunities and initiatives Mr. and Mrs. Vaughn's generosity is making possible," stated Chancellor Kelly Damphousse.  "We are indeed very grateful for their gift and their foresight."

After meeting while in graduate studies at the University of Oklahoma then getting married, their career path eventually took them to Hoxie High School, where she taught speech and drama and he was principal.  Former students have often spoke fondly of the couple and their encouraging approach to learning.

Both A-State alumni, Mr. Vaughn earned a master's degree in education and Mrs. Vaughn earned her degree in elementary education.  Previously, they had earned degrees at Oklahoma and Stephens College, respectively. They lived at Delaplaine for many years before moving to Jonesboro.  He died in 2013; she in 2015.

"Jim and Wanda Lee would be very humbled, yet proud, of the impact that their endowment will have for the Arkansas State University Foundation, the current and future students, and professors of Arkansas State University," said Steve May, trustee for the Vaughn estate.  "Both had a history as educators, so they knew very well that resources do make a difference in facilitating education.  They were both very philanthropic and kind people, and this gift will hopefully inspire others to follow their lead.”

Based on the Vaughns' record of giving during their lives and their interest in various programs at Arkansas State, their gift will be allocated for endowed professorships, a scholarship for future educators, art gallery support, financial assistance to deserving students and student life enhancement:

-- A gift of $250,000 to establish an endowed professorship in the College of Education & Behavioral Science, to be awarded annually to an outstanding faculty member.  The first recipient is Dr. John D. Hall, professor of psychology and counseling.

-- A gift of $250,000 to establish an endowed professorship in the College of Sciences and Mathematics, to be awarded annually to an outstanding faculty member.  The first recipient is Dr. Argelia Lorence, professor of metabolic engineering.

-- A gift of $250,000 to establish an endowed professorship in the College of Liberal Arts and Communication, to be awarded annually to an outstanding faculty member.  The first recipient is Dr. Cherisse Jones-Branch, professor of history.

-- A gift of $175,000 to establish the Jim and Wanda Lee Vaughn Endowed Scholarship in the College of Education and Behavioral Science for an aspiring educator.

-- A gift of $2 million to establish the Vaughn Excellence Fund for special university initiatives.

-- The Vaughn Gap Fund, $400,000, which will generate income to support scholarships for promising students who receive some financial aid but who still have major need.

-- Naming of the public reception area adjacent to the Reng Student Union third-floor auditorium as the Vaughn Student Lounge.  The Board of Trustees approved this action Friday.

"The Vaughns were such a vital part of the Arkansas State family, as alumni, as Chancellor's Cabinet members, and generous supporters of our mission -- to educate leaders, enhance intellectual growth, and enrich lives," said Dr. Jason Penry, vice chancellor for University Advancement.  "This estate gift is a tremendous testament to their commitment to higher education."

The couple enthusiastically participated in the cultural and civic activities in the region.  Mrs. Vaughn, who was particularly interested in theater, was joined by her husband to write, direct and produce historical dramas, such as "The Crowley's Ridge Story," "Mother of Counties" and "The Heritage Trail," in Greene and Lawrence Counties.

Mr. Vaughn, a Navy veteran and broadcaster early in his career, served on the Arkansas Educational Television Commission and was influential in introducing the high school Quiz Bowl competition.  He also wrote educational books, computer programs and award-winning fiction about his boyhood home in Kentucky.

Their involvement with A-State also included her service on the board of the ASU Foundation, Inc., and his membership in the Chancellor's Cabinet and the ASU Museum Advisory Council.  They also established the Jim and Wanda Lee Vaughn Athletic Endowment for student-athletes. 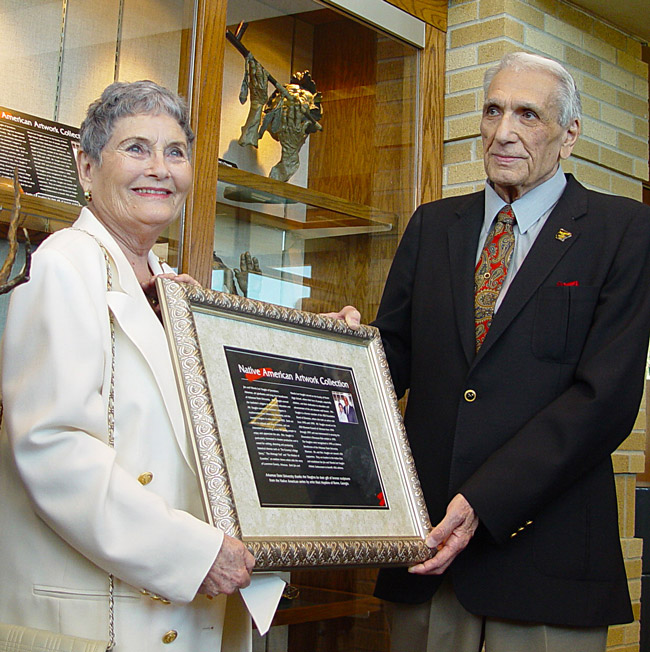 In a 2005 photograph, Wanda Lee and James E. Vaughn are recognized for donating to Arkansas State University nine bronze sculptures
from the Native American series
by artist Mark Hopkins.