JONESBORO – Jared Gowen, a senior from Garner who will graduate from Arkansas State University in May with a degree in biological sciences, received the prestigious R.E. Lee Wilson Award for 2017 at the 84th student honors awards ceremony Thursday evening at Cooper Alumni Center. 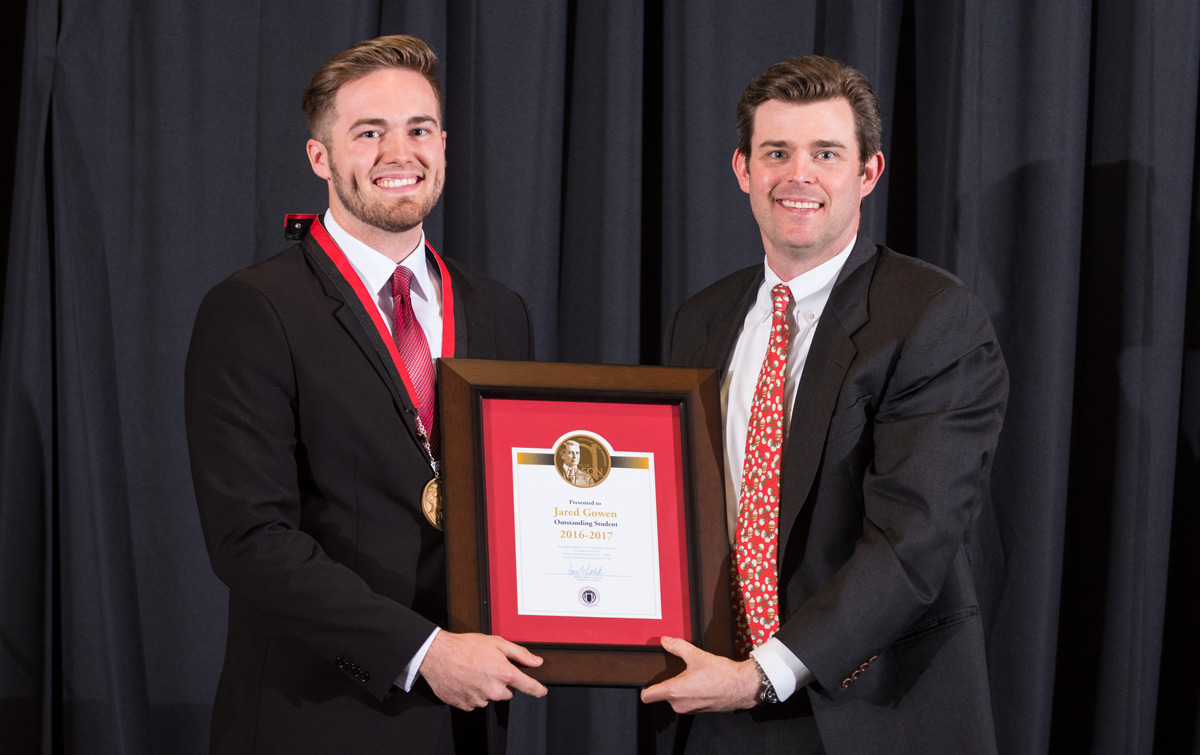 Gowen was selected from a group of eight Distinguished Service Award winners honored at the ceremony. Perry Wilson, the great-great grandson of R.E. Lee Wilson, presented the award to Gowen.

The Wilson Award is presented annually to the university's most outstanding graduating senior. The recipient is selected on the basis of character, determination, involvement, leadership, participation and academic achievement. This honor is bestowed in memory of R. E. Lee Wilson, a member of the Arkansas State University Board of Trustees from 1917 until his death in 1933. Presentation of the award began in 1934.

Gowen was nominated for the award by Dr. Anne Grippo, associate dean of undergraduate programs and professor of biology. He has a minor in chemistry and a perfect grade point average of 4.00. His goal is to become a physician.

Among his academic achievements Gowen has been on the Chancellor’s List each semester since 2013 as well as the Honors Director’s List. He is the recipient of an A-State Leadership scholarship, the Arkansas Challenge Lottery scholarship, the Sound of the Natural Band performance scholarship and is a member of the Honors College.

He is part of the Taste of Italy study abroad experience this spring and summer.

Gowen serves as president of the Chancellor’s Ambassadors, an elite group of students who act as an advocate group for the university to potential students and their families. He is also the president of the Student Conduct Board, a student-driven body that hears information concerning alleged violations and ensures that all students are treated fairly.

Accompanying the conduct board is Gowen’s membership in the Title IX hearing committee that hears Title IX decision appeals from within the university.

He has served as a teaching assistant in the Department of Chemistry and Physics in the organic chemistry laboratory since the fall of 2015. While acting as a general aide to the instructor, he helped answer students’ questions and helped set up labs and grade assignments. He is the current secretary for the Pre-Professional Club, an organization designed for students pursuing careers in any pre-professional occupation.

A part of the patient ambassador program at St. Bernards Medical Center, Gowen is directly involved with patients and is able to obtain experience in the field of medicine firsthand.

In campus activities, Gowen was a member of the A-State Homecoming court last fall and has been a resident assistant since the fall of 2014 and a member of the Sound of the Natural State marching band and Concert Band.

The Distinguished Service Award winners are recognized as the institution’s most-outstanding graduates because of their leadership, scholarship and citizenship. Faculty, staff, advisers to student organizations and other members of the campus community submit nominations for these prestigious awards.