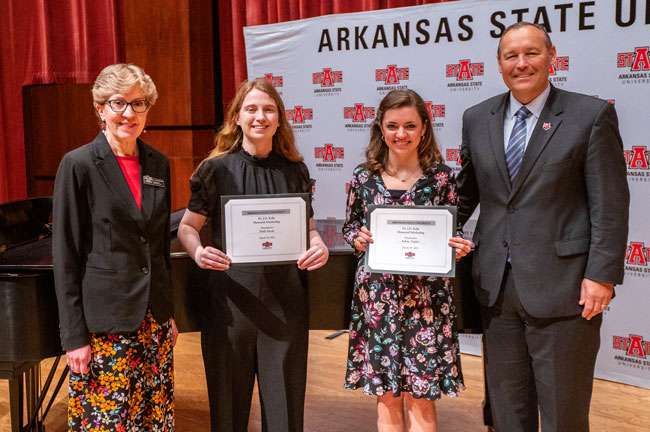 JONESBORO – Friends and colleagues of the late Dr. John D. Kelly gathered at Riceland Hall on the Arkansas State University campus to announce the inaugural recipients of the memorial music scholarship in his name.

Holly Farrah of Marion and Aubrey Triplett of Cottonville, Miss., received the inaugural awards of the Dr. John D. Kelly Scholarship.  The two music majors were awarded the scholarship for the upcoming 2022-2023 academic year.

Joining Arkansas State in 1975 as a music instructor, Kelly retired in 1998 as a full professor and received emeritus professor status from the university. For 23 years he served as the coordinator of keyboard activities at A-State.

Kelly once said that his greatest achievement while teaching was “just seeing the students succeed.”  His care for his students led him to become a member of Legacy Society member at A-State.  As a result, Kelly’s planned gift has bequeathed an endowment of more than $211,000 to Arkansas State to establish a scholarship for a student in the music program.

The measure of his impact upon his students and colleagues is the additional gift that has flowed into the Dr. John D. Kelly Scholarship.

“It is a tremendous honor to have the privilege of fulfilling Dr. Kelly’s wishes by bestowing this first J.D. Kelly scholarship,” Chancellor Kelly Damphousse said.  “As a lifelong educator, I understand and appreciate Dr. Kelly’s devotion to his students.  While I did not know him well, I did have the privilege to meet him, and I do know this -- his students revered him, and to a person have said what an impact he had on their lives.  Through this most thoughtful gift, Dr. Kelly will continue to impact lives of music students at Arkansas State.”

A legendary music instructor, Kelly was named multiple times as the top university-level music teacher in the state of Arkansas.  He was named a Music Teachers National Association Foundation Fellow and during A-State’s centennial celebration in 2009-10 he was recognized by the Faculty Association as one of the First 100 Distinguished Faculty of the institution.

Kelly was active in the regional music community, serving on several statewide and national boards and organizations devoted to music instruction.  He played for several church congregations across the region ranging from a dozen to a thousand parishioners, and he remained active into his eighties judging recitals and providing private lessons, even during the pandemic.

He enjoyed an active career as a solo performer and a collaborative pianist. He toured for three years with affiliate artist Kay Griffel and has served as pianist for Margared Kallil and Elena Nikolaidi.  There have also been numerous performances as soloist with orchestras. In November 2021, he went to New York where he was inducted into the prestigious Steinway & Sons Teacher Hall of Fame.

“Dr. Kelly was a Legacy Society member, and always knew part of his estate and his legacy would be to give students an opportunity to fall in love with playing the piano as a vocation as much as he loved it,” Vice Chancellor for University Advancement Erika Krennerich Chudy said. “His former students credit him for changing their lives.  He was always someone who had an impact on people if they were willing to learn from him, and now through his scholarship, students will continue to be touched by him.”

Farrah won the J.D. Kelly Competition in 2019 for high school students, and had won and placed in numerous other competitions.  A current first-year student at A-State, she also sings in the A-State Choir Scarlet Voices and has been involved in A-State music programs since she was 11.  She played for Dr. Kelly in many master classes.

A transfer junior, Triplett is also a member of the A-State Concert Choir and Jonesboro Chorale. She also played for Dr. Kelly many times when he judged events for Greater Memphis Music Teachers Association and other music organizations.

Former students and colleagues wishing to add to the scholarship can direct gifts to the Dr. J.D. Kelly Piano Scholarship Endowment, P.O. Box 1990, State University, AR 72467 or give online at AState.edu/donate. 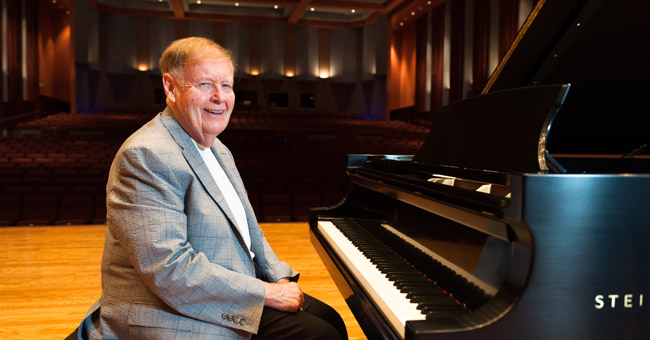