I Met My Mate at A-State: Erynn Fenner Witt

Erynn Fenner Witt has some advice for all Arkansas State music majors; go to Recital Tuesdays.

A 2013 music graduate from Jonesboro, she was debating whether to listen to her head and attend the scheduled recital, or listen to her stomach, skip the recital and go grab lunch.

A flutist, she wasn’t really interested in the master class being presented by the Synergy Brass Quintet that would be performing later that night at Fowler Center.

Lunch won out, and the story might have ended there. But, when she went to her next class that afternoon–a wind ensemble–she learned the quintet would be performing for her group also, and they were late.

“I was sitting on the front row when they came in,” she said. “And I thought, ‘they are really playing loud.’ But then I looked up at the trombone player in the center of the group and thought, ‘he’s CUTE.’

After the class, she showed a photo she had taken of the guy to her sister, who was not impressed. Undeterred, she decided to purchase a ticket for the evening performance at Fowler Center. Some friends were there with her for the show.

“During one of the songs at the concert, the Synergy members came out into the audience to play,” she noted. “I could hardly believe it when the trombone player, Jordan Witt, came up to our part of the theatre.”

As they were leaving Riceland Hall following the performance, Erin told her friends, “Aw, I guess I’ll never meet my husband.” That’s when she noticed people in the Grand Hall were milling around holding their concert programs.

It seems the group members would give autographs after the performance. So, she stood in line at the trombone table and waited her turn while two of her male friends agreed to wait for her.

“When he came out, our eyes met, and it truly was like time had stopped,” she said. After she procured the autograph, the trombonist asked if she’d like to take a photo. Of course, she did. Then it was time to move for the next autograph-seeker.

“I was trying to be professional and make sure everyone had a good time, but I also wanted to keep an eye on Erynn and make sure I got to talk to her,” Jordan said.

After getting other autographs, she and her two friends started out the door when Jordon stopped her.

“I didn’t want her to heave without talking to her,” he said. “Call me,” he said as he gave her his phone number.

When she got home, she was conflicted. Should she call?

“Delete that number,” her sister said.

But her mother was more welcoming. “Text him if you want. I think that would be okay.”

So Erynn texted Jordan; Jordan then called Erynn. They talked two-and-a-half hours. He tried to coax her into meeting him that night, but she said she could not, but did agree to meet him for breakfast the next morning, and it went well.

They texted each other for several months, but eventually, she just stopped. After a short while, he texted her he missed her, and that’s when they started talking regularly on the phone.

In August 2010, he came in for a week to meet her family. He’d drive her to marching band practice every day. Before he left at the week’s end, he asked her to be his girlfriend, and then he went back on tour. Later that fall, she made the trip to his native Big Stone Gap, Va., to meet his family at Thanksgiving. In 2011, he left the brass quintet and joined the U.S. Navy.

“I had been thinking about getting off the road,” Jordan said. “She’d come to see me perform at Ole Miss around Christmas time. I knew I wanted to marry her.”

Meanwhile, back at A-State Erin was studying toward her degree and working part-time at Fowler Center. One day in September 2012, Fowler Center Director Wendy Himes asked Erynn to come with her into Riceland Hall.

“I thought Dr. Himes was going to show me something before anyone else got to see it and I felt a little special,” Erynn explained. “As we walked in a side door, it was dark, but I could see there were lights on in the area of Riceland’s stage.”

As she walked closer, she looked up. There was Jordan, in his Navy dress blues with a Tiffany ring box in his hand, kneeling on the stage where he had performed two years before.

She said yes and went to marching band practice.

The wedding was planned via telephone between Arkansas, Virginia and Jacksonville, Fla., where Jordan was stationed at the time. Of course, the ceremony took place at the only logical choice. They were married March 16, 2013, in the Grand Hall of Fowler Center where he had given her an autograph.

The couple is now living on the island of Oahu in Hawaii, where E4 Petty Officer Third Class Jordan Witt is a member of the United States Navy Band.  A Virginia Tech fan, Jordan has become a converted Red Wolves fan, thanks to Erynn’s enthusiasm.

So the next time you are tempted to skip class, listen to the wise words of Erynn Witt.

“Don’t skip class. I got lucky having a second chance that day. You never know; you, too, might meet your mate at A-State.” 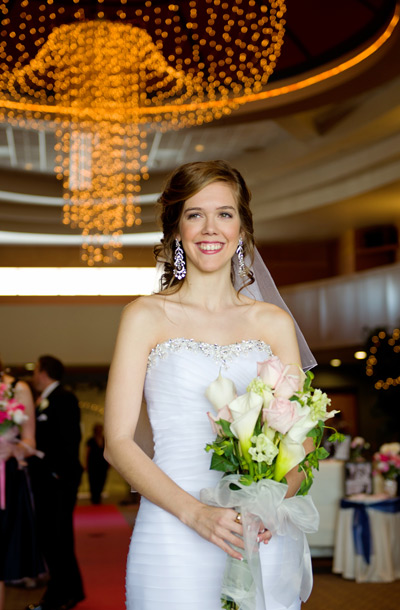 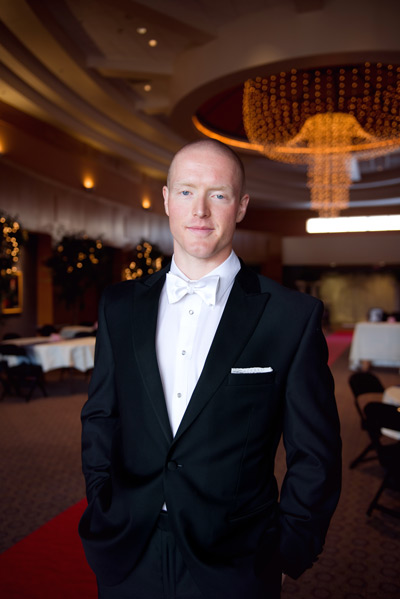 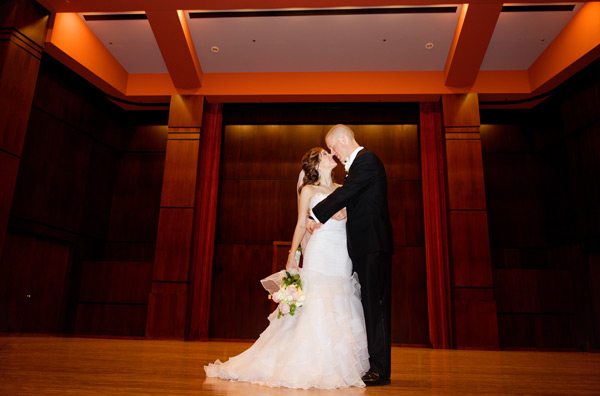 On the stage where she first placed eyes on Jordan. 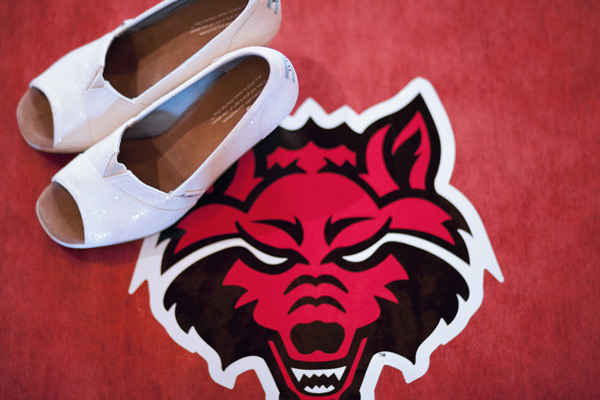 Swept off her feet at A-State

The photos included in this story, including the photo on the homepage, were taken by Zoe Photography.