JONESBORO – Like other college students, junior journalism major Glenda Daniel struggled to deal with the shock and sadness that gripped the nation on Nov. 22, 1963, when President John F. Kennedy was assassinated in Dallas.

She was serving as co-editor of The Herald of Arkansas State College that semester.  Her strong interest in journalism was influenced by her parents who had made their living in newspapers, first as owners of a weekly in Missouri then as staffers with the Baxter Bulletin in Mountain Home.

The current generation of A-State students had an opportunity Wednesday to hear about the national tragedy from an authority whose has chronicled his experiences with the Kennedys in two books.

Clint Hill, one of the Secret Service agents in the Kennedy detail, and co-author Lisa McCubbin spoke at Riceland Hall in Fowler Center.

Hill’s stories resonated with alumni like Daniel who remembered where they were when they heard the unfathomable news.

“I was working at the campus radio station (KASU) when the news of the assassination came in.  The campus just emptied out right then,” she said by email from Spain, where she now lives.  “I went to my dorm, crying and in shock, to talk about it with my friends and wait to hear more.  We had all felt so idealistic and hopeful about the Kennedy administration, and it seemed impossible that such a thing could have happened.”

“My father covered the story, and it seemed as if Truman had very few bodyguards.  He certainly felt free to mingle easily with the crowd,” she remembered.  A presidential visit to dedicate a dam in Arkansas was echoed by Kennedy 11 years later when he dedicated Greers Ferry Dam less than two months before his death.

When The Herald resumed publication after Thanksgiving that year, it featured a bylined commentary that Daniel had crafted in order to convey her thoughts to fellow students.

“The commentary wasn't assigned,” she explained.  “I wrote it out of strong feelings right after seeing the news video of Lyndon Johnson being sworn in as president aboard Air Force One, and my memory is that Tex Plunkett, our faculty adviser, decided it should run on page one.”

First, she reflected on the importance of recognizing the cost of freedom.

“We, the post-war generation, had tended to take democracy for granted, a casual inheritance from long forgotten ancestors,” she wrote for The Herald.  “. . . as tragedy struck with brutal impact, we became aware that freedom, too, is bought with a price that as our forefathers fought to gain liberty so must we fight to maintain and defend it.”

She encouraged her fellow students at Arkansas State to “. . . take a closer look at the world around us and become active citizens, keeping abreast of current affairs, knowing the issues, becoming involved.”

With a nod to President Kennedy’s own famous “Ask not . . .” line in his 1961 inaugural address, she concluded, “A great tremor has shaken our nation in recent weeks, and as a result our way of life has been challenged.  As citizens of a new generation, can we afford to shirk the responsibility that is ours to meet that challenge?”

After graduate school at the University of Texas and writing several years for the Chicago American, the Chicago Tribune, and national magazines, her career path evolved to environmental advocacy for non-profit organizations.  Earlier this year she retired and moved to San Sebastian, Spain, to be closer to her daughter, who teaches at the University of Navarra, and her family.

A half century later, she still vividly remembers the mindset that led her to prod her fellow students.

“In the midst of the shock and sadness, I was proud that the government kept functioning with honor, and a new president was sworn in peacefully,” Daniel added. 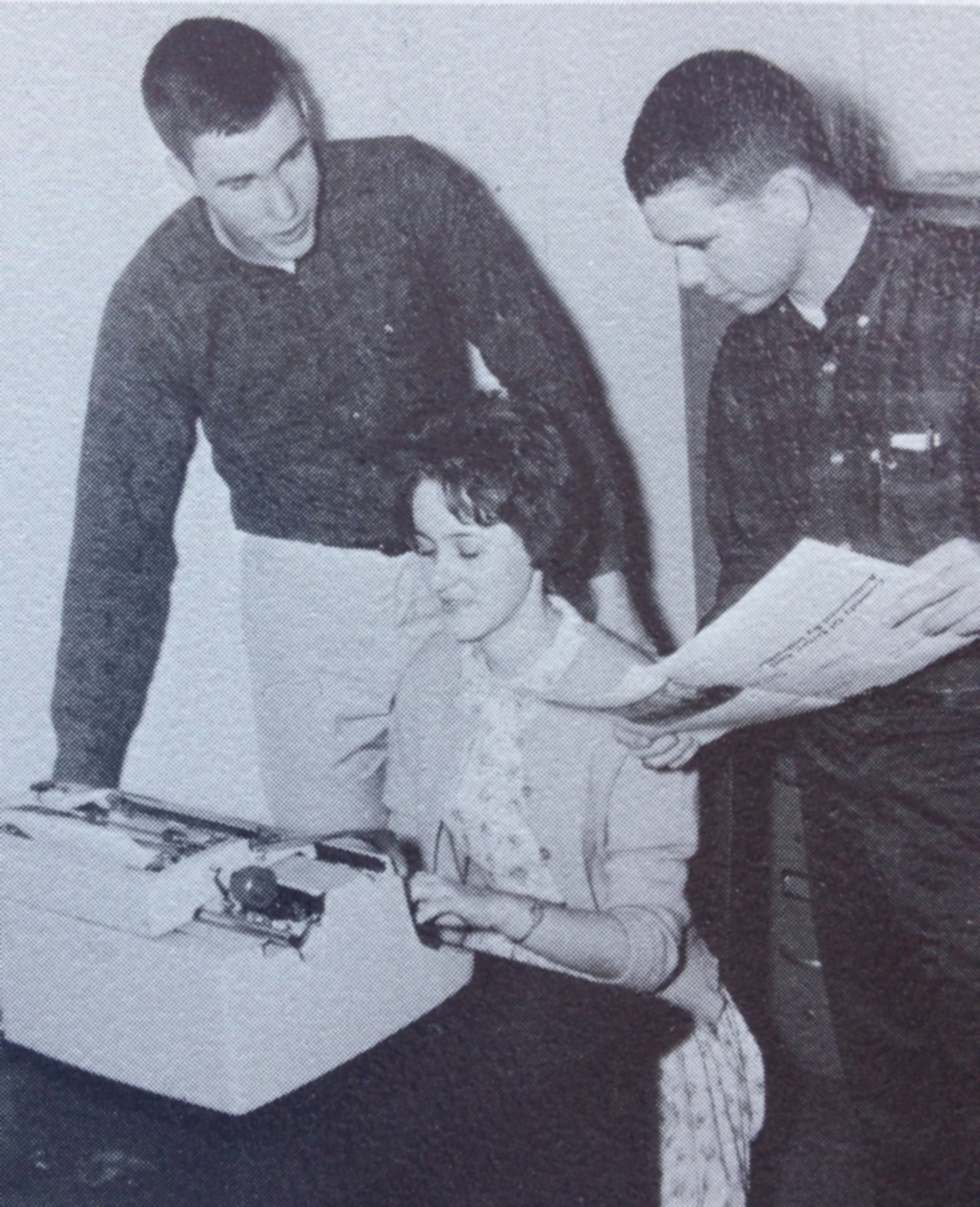 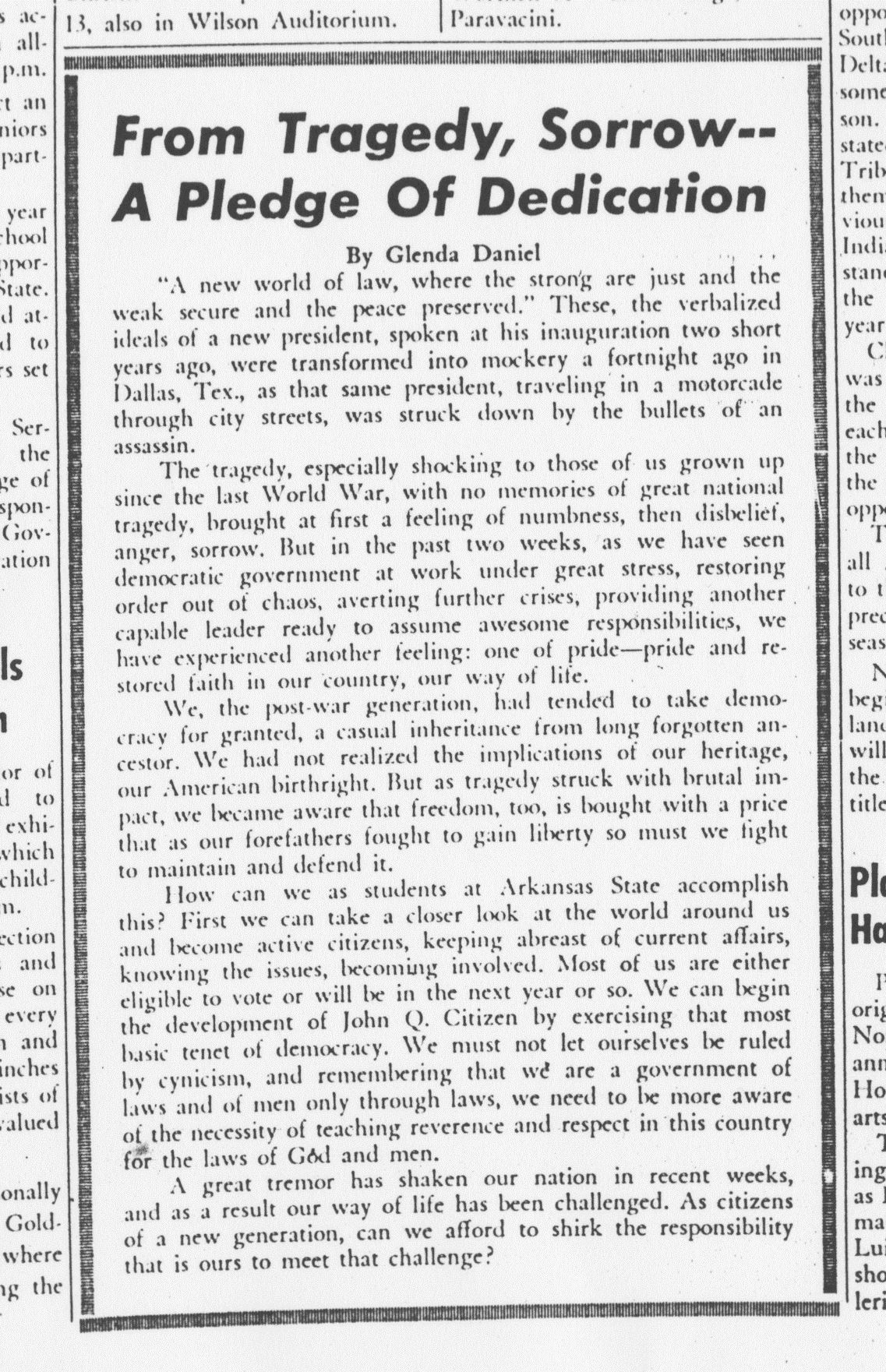