JONESBORO -- Three new exhibitions will open to the public at 5 p.m. on Thursday, March 10, at the Bradbury Art Museum on the campus of Arkansas State University.  Along with the exhibition of several drawings by Guy Church the museum will also feature, “Believe” consisting of a large installation and several sculptural works by Greely Myatt. Drawn from the A-State permanent collection, the third exhibition, “Pure Line” includes a series of prints by Donald Judd and linear steel sculptures by Tony Rosenthal.

Guy Church, originally from Madison, Wisconsin, has spent the last 20 years living and working in Memphis. Influenced by a love of painting, this self-taught artist has been drawing people, most notably children, for three decades. Church’s figures and their environments are defined by his carefully placed marks rendered in graphite, charcoal, colored pencil, and ballpoint pen.

Church has stated “I like the subject of people and what they do. I pretty much just try to invent a face that looks like the person in the story I have in my mind. I ask myself, ‘What is she thinking about?’ Well that’s kind of up to the viewer, I guess. She’s not a real person. She’s a picture.”

According to Les Christensen, director of BAM, “His enigmatic drawings bring to mind a found photo album, like something you may run across in an antique store.  These unknown people seem in some way familiar, almost as if you should remember them.”  She continues, “His figures are lost in the moment of an unhurried, surreal world, where children eternally climb trees, ride bikes or learn to type.  Most often in solitude, they convey focus and innocence but something disquieting too.”

On loan from several private collectors, the work in the exhibition was curated by Christensen and Matt Ducklo, founder and owner of TOPS Gallery in downtown Memphis.

The exhibition runs through April 10.

BAM hours are noon to 5 p.m. Tuesday through Saturday, 2 to 5 p.m. on Sunday, and by appointment.  BAM follows A-State’s schedule and will be closed during spring break from March 20th through the 27th. The exhibition and the reception are admission-free and open to the public.  For additional information please contact the museum at (870) 972-2567. 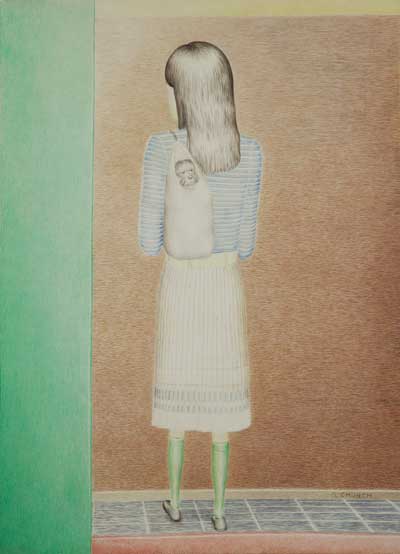