JONESBORO – An aspiring engineering major at Arkansas State University is the inaugural recipient of the Hytrol Scholarship for Engineering.

Brandon Cole is entering his junior year as a mechanical engineering major and the first Hytrol Scholar.

Born in Jonesboro, Cole grew up in Missouri then returned here to finish high school and begin his university experience at A-State.

"I am extremely grateful to be the first Hytrol Scholarship recipient. I am honored that Hytrol, the leading brand of material handling systems, has invested in my education and my future," Cole said.  "When I think of the benefits this scholarship delivers to me, I am overwhelmed by their generosity."

Hytrol officials previously had announced its endowment gift to A-State in support of the scholarship program for engineering students, and the announcement of the first recipient is significant.

"We are excited to award the first Hytrol Engineering scholarship," commented David Peacock, president of Hytrol Conveyor Co., Inc.  "It was made even more special by being awarded to a young man who is currently an intern at Hytrol."

"In the conversations with Mr. Cole, he was clearly moved by being selected as the recipient and shared that this scholarship was a key element in making his education possible.  Mr. Cole possesses exactly the character and commitment to improvement we envisioned when we made the decision to assist in the education of an A-State student.  It is a true honor for us to play this role," Peacock added.

"My goal is to graduate from Arkansas State with a mechanical engineering degree, then earn my master's degree. I am still deciding what area I want to focus on, but I have narrowed it down to mechanical, robotics, or aerospace," Cole added.

The impact of the Hytrol Scholarship is very important to the university, officials emphasized.

“The Hytrol Scholarship is one of the premier offerings in the engineering program at Arkansas State University.  Our engineering enrollment has grown at a very fast pace over the past several years and the Hytrol Scholarship allows us to recruit and retain the region's best and brightest students," stated Dr. Timothy N. Burcham, dean of the College of Agriculture, Engineering and Technology.  "I envision Brandon spending his professional career contributing to the growth and vitality of Jonesboro and Northeast Arkansas.  The Hytrol Scholarship is foundational in building the intellectual capital necessary for Northeast Arkansas to thrive in the 21st century." 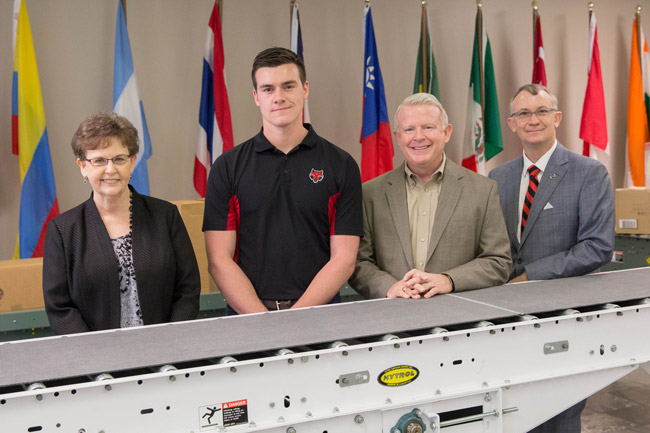 Participating in the Hytrol Scholarship for Engineering announcement are (from left): Debra Lewis, manager of administration, and board member and trustee, Hytrol Conveyor Co., Inc.; Brandon Cole, recipient; David Peacock, president of Hytrol; and Dr. Timothy Burcham, dean, College of Agriculture, Engineering and Technology at A-State.