JONESBORO – When international inspectors check nuclear facilities for evidence of illegal activity, accuracy and timeliness are crucial because the stakes are so high.

While methods exist for detecting enriched uranium where it's not supposed to be, Dr. Jonathan Merten hopes to develop a technique that gives reliable results virtually on the spot.

While helping conduct a "Select a Major" event for Arkansas State University students one Saturday, Merten and physics professor Dr. Bruce Johnson came up with the idea of a laser-based method to measure uranium enrichment levels in microscopic samples in less than a second. 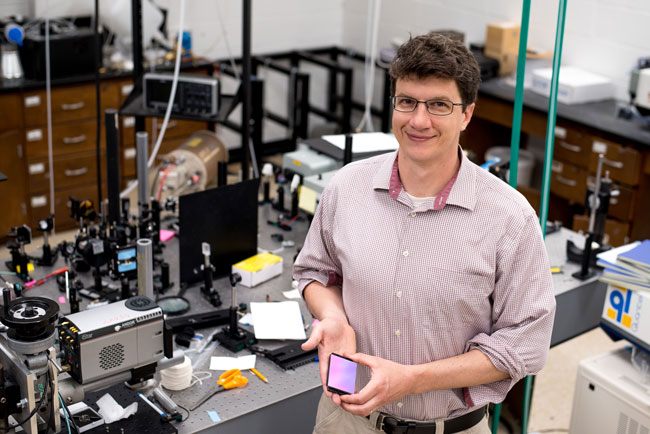 The assistant professor of chemistry at A-State is now working on a research contract with the Defense Threat Reduction Agency of the Office of Naval Research.  The grant is $264,030 for the first three years.

The project title, "Pseudo-Continuum Source Volume Isotope Effect Absorption Spectra for Fieldable Measurement of Uranium and Plutonium Enrichment," may seem dense, but Merten can explain it for a lay audience.

"In order to make weapons-grade uranium suitable for a simple atomic bomb, it is necessary to remove most of the uranium-238 atoms, leaving behind mostly uranium-235 atoms (enriched uranium)," he says.  "Bomb makers need this high density of uranium-235 to be able to create a critical mass.  Lower levels of uranium-235, sometimes called 'low-enriched uranium' are used in nuclear power plants.

"Separating the uranium-235 from the uranium-238 is an expensive and technologically difficult process.  In order to properly inspect a nuclear site, officials take many samples of material from the site for testing at official labs.  Results are not available for days or weeks after taking the sample, making nuclear site inspection challenging," he continued.

Merten, who joined A-State's faculty in 2012, completed his Ph.D. in analytical chemistry at the University of Florida.  He started pursuing this project for several reasons.

"It is a combination of a grad school obsession, a frustrated presentation from an old lab mate at a national conference, and the Saturday morning chat with Bruce Johnson," he continued.  "I did a crude proof of concept with Bruce's help and got an A-State Faculty Research Awards Committee grant, took better data and presented it as a poster at a national conference, then won a Ralph E. Powe Junior Faculty Enhancement Award for the idea, took yet more data with improved experiments, then applied for the big grant."

With sufficient progress, Merten's grant could be extended with funding for two additional years.  The real-time data generated with his method should make nuclear site inspection significantly more effective.