09/17/2015
JONESBORO – The Farm Hands will perform a concert of bluegrass music Monday, Sept. 28, at 7 p.m. at the Collins Theatre, 120 West Emerson Street, in downtown Paragould.  The concert is part of the Bluegrass Monday concert series presented by KASU 91.9 FM, the broadcasting service for Arkansas State University.  KASU will literally “pass the hat” to collect money to pay the group.  The suggested donation is $5 per person. 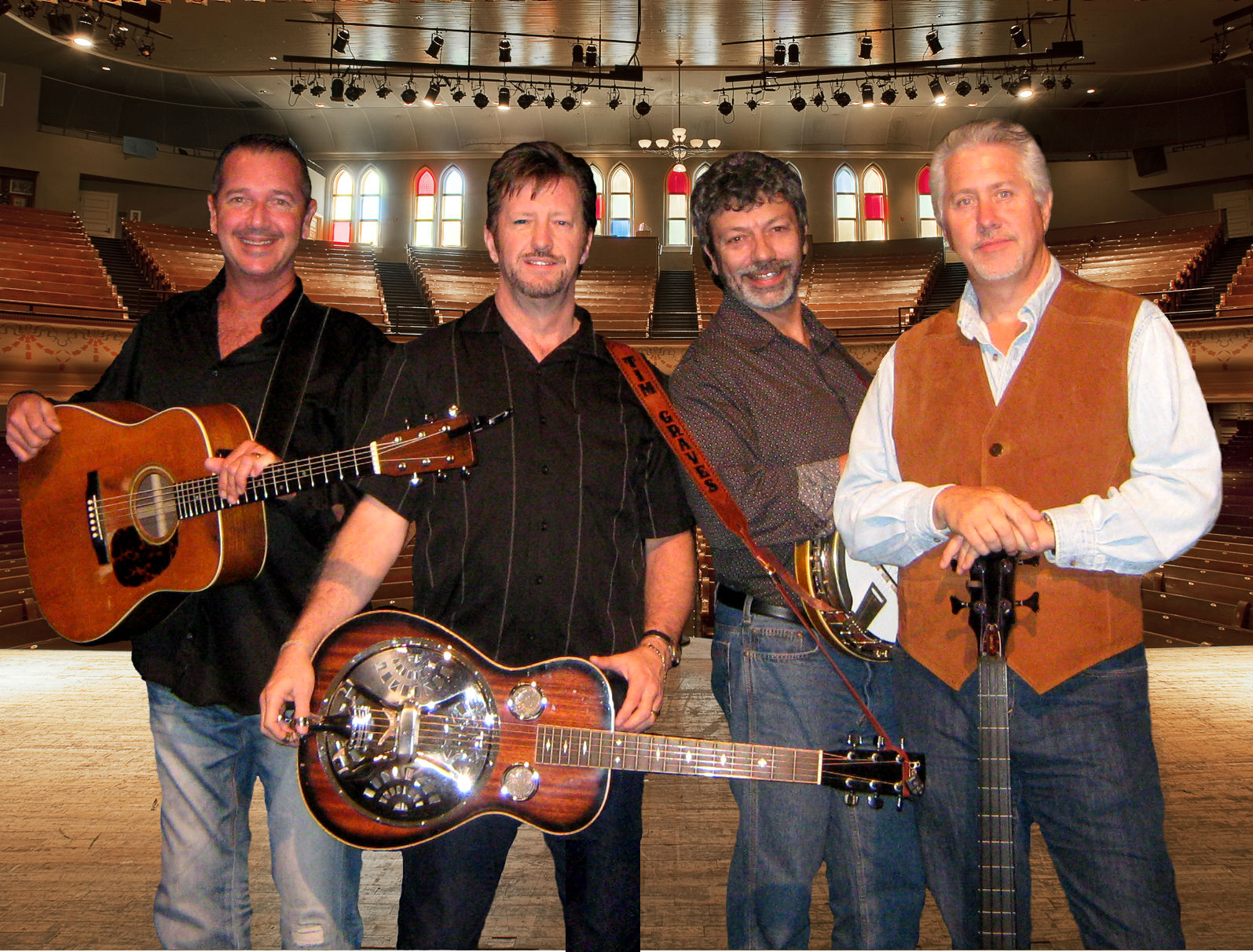 Formed four years ago, the Farm Hands are the 2015 winners of the Entertainers of the Year and the Bluegrass Gospel Group of the Year awards given by the national chapter of the Society for the Preservation of Bluegrass Music in America (SPBGMA).  The group was nominated for 12 additional SPBGMA awards in 2015, and the band won the 2014 SPBGMA award for Bluegrass Album of the Year.
The Farm Hands perform more than 150 concerts each year.  The group has produced three CDs, and they write a monthly column for “Bluegrass Unlimited” magazine.

Tim Graves is a vocalist and dobro player for the Farm Hands.  The dobro is a wood-bodied resonator guitar owned by the Gibson Guitar Corporation. The guitar was designed in the 1920s. Graves is the nephew of bluegrass hall-of-fame member Josh Graves, who is credited with introducing the dobro as an instrument in bluegrass music.  The elder Graves was a long-time performer with Lester Flatt and Earl Scruggs in their group, the Foggy Mountain Boys.  Together, Josh Graves and Tim Graves were nominated for a Grammy award for their work on the “Great Dobro Sessions” CD.
Tim Graves has been a professional musician for more than 30 years, beginning his career at age 14.  He has been a past member of the groups Cedar Run, The Boys From Shiloh and James Monroe’s Midnight Ramblers. He is also a past member of the touring band for the bluegrass hall-of-fame members, the Osborne Brothers.  He is a 10-time winner of SPBGMA’s Dobro Player of the Year award, and he has been a regular performer at the Grand Ole Opry for 20 years.
Prior to his work with the Farm Hands, Tim Graves led his own band, Cherokee.  In 2015, Graves was inducted into the SPBGMA Bluegrass Hall of Fame.
Daryl Mosley sings and plays bass for the Farm Hands.  Mosley began his professional career at age 16 as a regular performer at Loretta Lynn’s Ranch in Hurricane Falls, Tenn.  He spent 10 years in the band New Tradition, and he is a former member of Bobby Osborne’s Rocky Top X-Press.  Mosley was a regular performer at the Grand Ole Opry for 10 years, and he is a three-time nominee for SPBGMA’s Male Vocalist of the Year award.
Mosley is also an acclaimed songwriter.  Three of his compositions have reached the top position on various musical charts.  His songs have been featured on the television programs American Idol, The View and True Hollywood Story.  His song “Ask The Blind Man, He Saw It All” won Song of the Year honors from all major southern gospel music organizations in 2006.  That song was also named one of the top-35 southern gospel songs of all time by Singing News Magazine.
Keith Tew plays guitar for the Farm Hands.  He began playing music professionally at age 12 in his home state of Florida.  He is a former member of Hickory Wind and the Big Thunder Mountain Boys.  He has toured leading his own band, High Strung, as well as with Rhonda Vincent’s The Rage, Vassar Clements and Rock County.
Tew is a Grammy-nominated songwriter.  Mountain Heart, The Lonesome River Band, Ernie Thacker, Scottie Sparks, and Lou Reid and Carolina have recorded his compositions. Tew is a past winner of SPBGMA’s Song of the Year award.
Banjo player Bennie Boling is a two-time nominee for SPBGMA’s Banjo Player of the Year award.  He began playing as a teenager in East Tennessee and is a former member of Tim Graves’ band, Cherokee.  With national flatpicking guitar champion Steve Kaufman, Boling produced a series of bluegrass instructional videos.
Boling is also a successful songwriter.  The Oak Ridge Boys, Gene Watson and Jeanie Seeley have recorded his compositions.  He is a past employee of Gibson Guitars, where he worked building resophonic guitars, and he has worked for Huber Banjos assembling instruments.
In addition to the concert, Terry’s Café, 201 South Pruett Street in Paragould, opens on Bluegrass Monday nights to welcome bluegrass music fans.  The café serves a catfish buffet meal beginning at 4:30 p.m. on the evenings of Bluegrass Monday concerts.  Concessions will also be available at the Collins Theatre.
Bluegrass Monday concerts are held on the fourth Monday night of each month.  These concerts are presented with support from Bibb Chiropractic, the Posey Peddler, Holiday Inn Express and Suites of Paragould, the Northeast Arkansas Bluegrass Association and KASU.
For more information, contact KASU Program Director Marty Scarbrough at mscarbro@astate.edu or 870-972-2367.  Bluegrass Monday is also on Facebook (search “Bluegrass Monday”).
# # #
News Article
Search A-State
Contact University Communications