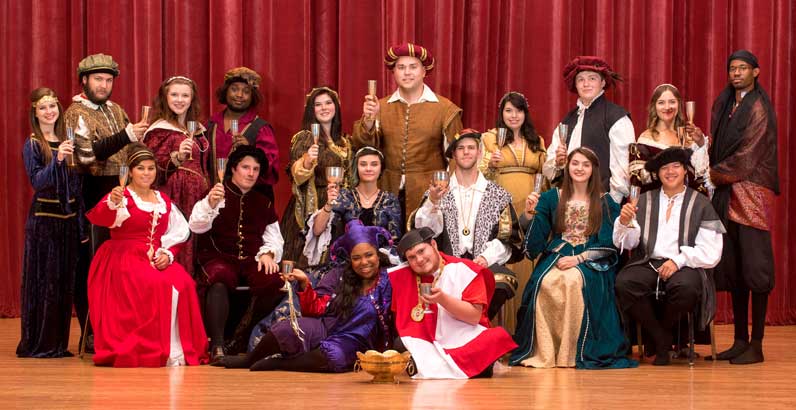 The Concert Choir and Chamber Singers will host the evening’s entertainment.  They will serve as the court of “King Henry the Eighth of England, Jonesboro and Craighead County.”

Guests will enjoy the Wassail Bowl beginning 15 minutes prior to seating, which begins with the first fanfare at 7 p.m. each evening, Friday and Saturday, Dec. 4-5.  The festivities will be in Grand Hall of Fowler Center, 201 Olympic Dr.

Music for the feaste will include traditional carols by the servers and audience, brass fanfares and harpsichord solos, as well as madrigals and chansons by the royal court.

King Henry the Eighth and Queen Anne Boleynn will be played by Drew Warren of Manila and Loren Snook of Bradford.  The lords and ladies of the Royal Court, played by the members of the Chamber Singers, are: Crystal Kachevas of Paragould, Victoria Pulliam of Searcy, Katelin Rickman of Bono, and Baylee Stracener of Cabot, sopranos; Bree Drew of Paragould, Victoria Dryer of Jonesboro, and Vanessa Partida of Harrisburg, altos; Gregory Self of Williford, Jeffrey Steward of Oil Trough, and Nathan Liouh of Jonesboro, tenors; and Matthew Crociata of Jonesboro, Hal Niederbrach of Searcy, Aaron Fisher of Memphis, and London Johnston of Little Rock, basses.

David Norris of Southside will play the Steward and Jazmin Selvy of Little Rock will serve as Jester.  The knaves and wenches will be played by other members of the A-State Concert Choir.  Brian Henkelmann, instructor of music, will play harpsichord, and the student brass ensemble will also play.

“The 2015 A-State Department of Music Madrigal Feaste continues a 17-year tradition of presenting music, dance and short plays representing the Renaissance era in Great Britain.  Studying the music and dance, costumes and dialect of the time near the reign of King Henry the Eighth is a valuable part of the choral musician’s preparation— it’s great fun for performers and audience members, and a delicious meal for our guests," Miller said.

Tickets for performances will be available through Monday, Dec. 1, at the A-State Central Box Office, by telephone at (870) 972-2781, or online at AState.edu/tickets.  Seats for the performances are reserved and are limited by space available.  Ticket prices are $40 for the general public, and $35 for A-State faculty, staff and students, as well as senior citizens or groups of eight or more.