JONESBORO – With Arkansas State University’s fall graduation quickly approaching, graduates and guests will notice a few changes to the ceremonial elements associated with this solemn academic occasion. A-State faculty, staff, students and alumni have used cutting-edge technology during the past months to redesign, restructure and complete all symbolic features on the mace including the Memorial Arch, a globe and the university seal.

These changes will be evident as commencement participants carry the mace into the Convocation Center, Saturday, Dec. 12, at 10 a.m.

“The production of the new A-State ceremonial mace has been a gratifying experience,” said Cooksey. “A team of individuals, each with significant skills and role, produced the mace using emerging technology and time-honored traditions.   In essence, these concepts are much of what higher education is all about.”

Mark Reeves, director of Publications and Creative Services, and his staff have been working over the last two years on various elements of the commencement ceremony. New processional banners, stage backdrops, medallions and diploma covers have been introduced over the last two commencement exercises. The mace is the final piece to complete the transformation.

Originally a weapon of the Middle Ages, church officials, guards of kings and other high officials carried the mace. Gradually, the mace became ceremonial in character and today is used symbolically in academic ceremonies.

From concept and design to production and assembly, state-of-the-art technology and equipment was used to construct the head of the mace.  Dr. Mixon, Dr. Sherman and several engineering students were involved in measuring and modeling the Memorial Arch to provide an accurate three-dimensional file to McLaughlin.  McLaughlin then combined the globe and seal he modeled with the arch to construct a prototype using a 3-D printer.   Once approved the files were sent for production.

The staff is handcrafted of wenge wood, a dark-colored, highly durable wood.  Dr. Scott Stubblefield is responsible for crafting the staff of the mace and its base.  The shape of the staff is patterned after the pillars of the Memorial Arch, giving it a distinct look. McLaughlin completed final assembly of the mace head and staff.

The mace is composed of two parts—the head and the staff. The head is comprised of the Memorial Arch located in the center of campus, a globe and two university seals.  The oldest structure on campus, the arch is an established icon that denotes the opportunities to advance in life, challenges, career choices and lasting new relationships through the educational experience offered by Arkansas State.

When dedicated by the Class of 1927, the Memorial Arch served as an entrance to the institution.  At the time, Arkansas State was known as A&M College, which is emblazoned across the top of the arch. Even  with the growth of the campus,  the Memorial Arch continues to occupy a prominent position. It now is fittingly located in the heart of the Arkansas State University campus.

The mace’s globe, suspended in the arch, represents A-State expanding its role to include more students from around the world and on the campus under construction in Queretaro, Mexico, and to help send students into a more global environment. It also symbolizes the international impact of the university, its students, faculty and staff.  Official seals are attached to the sides of the globe to represent the tradition, authority and integrity of the university. 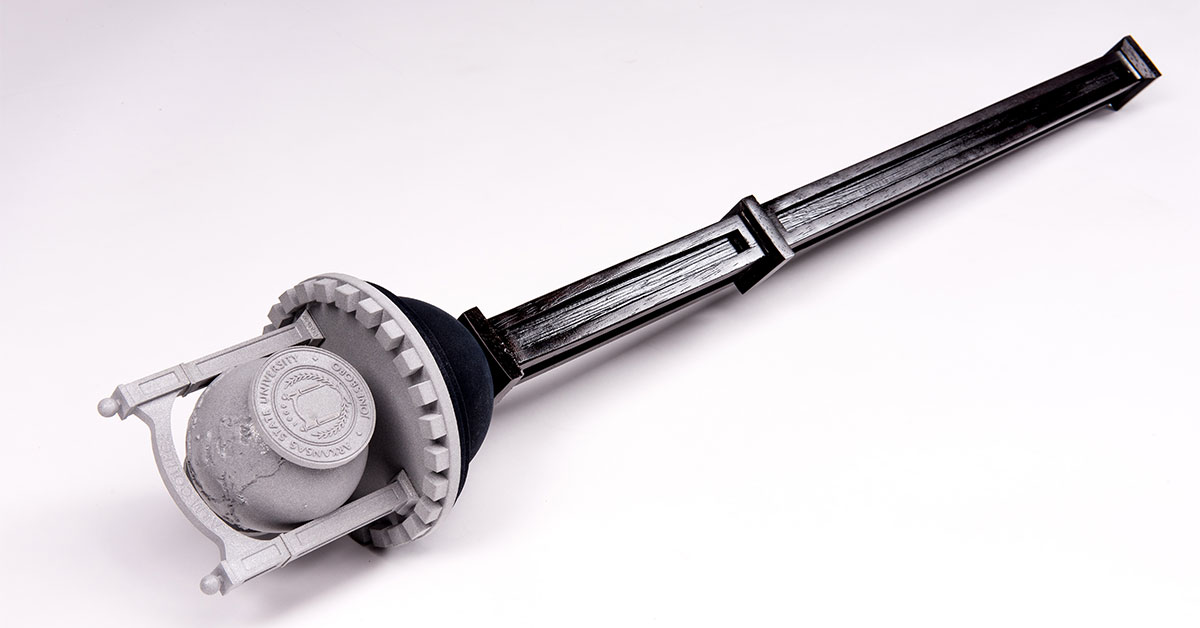 The redesigned mace at Arkansas State

The official seal of Arkansas State University has been designed for the purpose of authentication and to represent and build upon the impact of an education at Arkansas State. The Board of Trustees adopted the current design of the seal in 2013.

The seal has three distinct characteristics: the Memorial Arch that symbolizes a portal or entrance to new life, balance in form and university tradition. The second characteristic is the inset date of 1909 as the date the institution was established. Finally, the laurel wreath signifies the high achievement of its attendees. Together, these three features represent embracing, encompassing and encircling the globe.

Another academic portion is the use of the medallion. Medallions were used as adornments in biblical days and also served as symbols of authority. The Arkansas State chancellor’s medallion bears the seal of the university. The A-State Alumni Association president’s medallion bears a 1924 emblem, marking the establishment of the Alumni Association. The medallions are worn at all official academic ceremonies.