JONESBORO – Seven seniors in the College of Media and Communication and four seniors in University College at Arkansas State University were honored during campus Convocation of Scholars ceremonies as the two colleges’ most outstanding graduating students.

College of Media and Communication

Courtney Purser DeRoe of Paragould, also a communication studies major, received the 4.0 Scholar award.  In case of a tie, the Chancellor’s Scholar is the student with the most credit hours completed.

The department awards, based on scholarship, leadership, and service, were presented to the top student in each degree program.  Those graduating in December of 2013 as well as May and August of this year were eligible.

One student, Natalie Marcus Fleeman of Jonesboro, a journalism major (double emphasis in advertising and public relations), received the Robert L. Hoskins Award, which is named in memory of the founding dean of the college. The award is based primarily on professional achievements beyond the classroom.

In University College, Molly Kinser of Paragould received the Chancellor’s Scholar award for having the highest GPA, according to Dr. Jill Simons, dean.  Tonya Cole of Harrisburg received the 4.0 Scholar award.

Colea Blann of Little Rock and Alessandra Davey of Blytheville were co-recipients of the departmental award in the Bachelor of Science degree program in interdisciplinary studies. 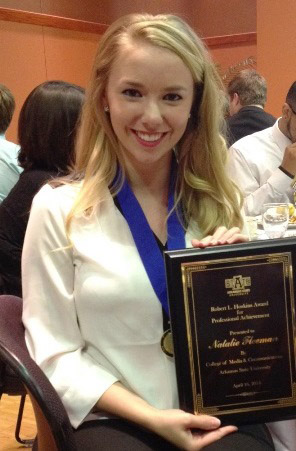