JONESBORO – Arkansas State University alumnus Neil Griffin of Kerrville, Texas, has made a historic $10 million gift to his alma mater.  In recognition of the largest individual gift to an academic program, the university requested from the ASU Board of Trustees approval to rename the business college as the Neil Griffin College of Business.  Earlier today, the board voted unanimously to bestow the honor on the 1948 alumnus of Arkansas State.

The $10 million gift will endow a range of scholarships, professorships and enhancement funds for the operations of the college.  In addition, Griffin has made provisions for a follow-on estate gift that will provide significant future enhancements.

“The scale of our gratitude to Neil Griffin is as enormous as the impact his legacy will have on the future students at Arkansas State University. They will benefit directly from the new scholarships that are being created and indirectly through the leadership of the professors whose work will be supported by this wonderful gift,” Chancellor Kelly Damphousse said.  “It is incredible to think about the long-term impact that Mr. Griffin’s gift will have on our university, our city and our region.”

“It is only fitting that the first named college in the ASU System recognize the career and generosity of one of our own,” ASU System President Charles L. Welch said.

Among the individual areas established through the Griffin gift are three chairs or professorships: the H. B. Foster Bowdon Chair of Accounting, the Neil Griffin Dean of Business and the Neil Griffin Professor of Entrepreneurship.  The endowment creates new Griffin Scholarships for students in the college, the Griffin Student Investment Fund for use by students in the university’s wealth management programs, and the Gena Griffin International Travel Fund, in recognition of Griffin’s wife.  Finally, to ensure the ability to maintain a high level of excellence within the college, a Griffin Excellence Fund will provide discretionary funds for the new Griffin Dean of Business.

The H. B. Foster Bowdon Chair exemplifies what Arkansas State meant to the World War II veteran Griffin when he returned home from service to his country.  Bowdon was the accounting instructor who worked with dozens of A-State veterans like Griffin who were eager to move on with their post-war lives.

“My father told stories of how these men were focused and serious,” Dudley Bowdon, H. B.’s son, recalled.  “That Mr. Griffin remembers my dad and that more than 50 years later he wanted to remember him with this endowed chair is one of the most touching things our family can imagine.”

“The relationship between Mr. Griffin and his former professor is the heart of our university,” Damphousse said.  “Since arriving at A-State, I have heard many stories from our alumni about the professor or the staff member who reached out to mentor, to assist or to guide them through their time in Jonesboro.  For Mr. Griffin, it was Foster Bowdon, who gave up time on weekends and during summer breaks to work independently with Neil on his accounting classes, which allowed him to graduate in just two and a half years.”

A Naval veteran of the Pacific theater, Griffin was a native of Needham Community near Jonesboro, and enrolled at then Arkansas State College after his discharge.  Graduating with his degree in business administration in 1948, he began his career in professional accounting, moving on into banking, investment banking and CEO of two publically held corporations.  Now semi-retired and residing in Kerrville, Griffin is engaged primarily in philanthropy and angel investing with emerging industries.  He and his family have been major contributors in the past to Arkansas State, initiating a scholarship endowment of $5 million in 2012, as well as to cancer treatment and research, fine arts and numerous other causes across the U.S.

“Growing up in the Jonesboro area and attending Nettleton High School, I am well aware of the importance of Arkansas State to this region,” Griffin said.  “I have been blessed beyond any dream I could have had as a young man attending ASU, and I firmly believe in the need to give back to those who helped you along the way.”

“Neil describes his life as an adventure,” Vice Chancellor for Advancement Jason Penry said. “His adventure includes being a leading advocate and investor in education. We are so proud that one of our graduates is known as one of the top philanthropists in our region.”

Griffin’s $10 million naming stands as the largest single gift by an individual to Arkansas State University, surpassing a trio of recent bequests in the $5 million range.  John Allison’s $5,000,001 individual gift to the athletic department’s North End Zone project in December was the most recent.  Allison also made an individual commitment of $5 million to the expansion and renovation of Centennial Bank Stadium in 2013.  The previous largest individual gift was $4.5 million from the Fowler family to construct Fowler Center in 1998.

Today’s $10 million naming gift, combined with a substantial planned gift in his estate, means the Griffin endowment for the College of Business will likely surpass the $14.7 million commitment from the Donald W. Reynolds Foundation for the construction of the Reynolds Center for Health Sciences.  The Reynolds Foundation gift was spread over four years from 2008 to 2011.

The naming of the Griffin College of Business solidifies Arkansas State’s AASCB-accredited program as one of the up-and-coming business colleges in the region.

“As we continue our search for a permanent dean – now the Griffin Dean of Business – this naming and these supporting endowments will directly impact the two most important aspects of our college:  our students and our faculty,” interim dean Kathy Loyd said.

For students, the majority of the overall gift is dedicated to new scholarships, providing assistance to students in the Griffin College with financial need and a demonstrated strong desire to succeed.

Finally, the Gena Griffin International Travel Fund will provide stipends to students to study overseas and gain important experience in other cultures and business systems around the world.

The two endowed professorships will be named later this year following the selection of the next dean of the Griffin College.  Arkansas State recently began the search for its next permanent dean, and the administrator selected will also become the first Griffin Dean. 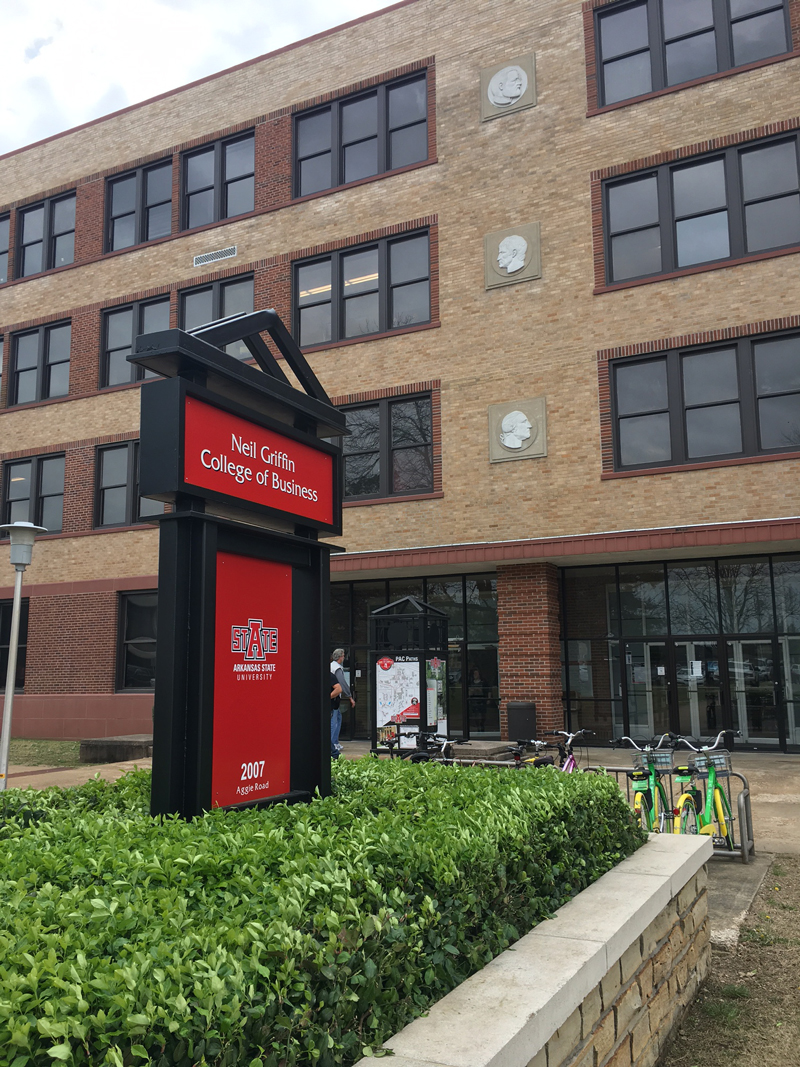 Newly updated signage in front of the building.