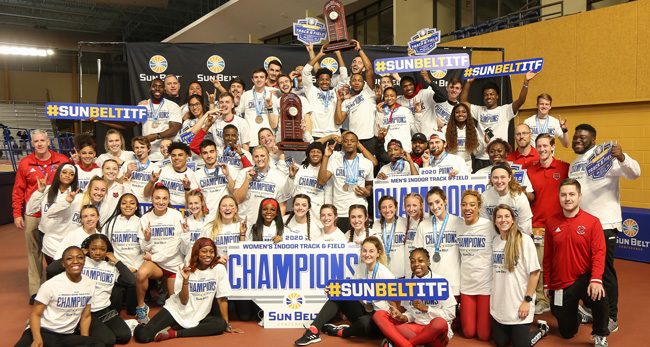 BIRMINGHAM, Ala. – It was a clean sweep on Tuesday at the Sun Belt Indoor Track and Field Championships, as Arkansas State claimed both the men’s and women’s team titles for the first time since 1998.

The Red Wolves also became the first program to sweep the Sun Belt indoor titles since 2010. Five Red Wolves claimed individual titles (3 women, 2 men) in addition to the men closing out the meet with a gold-medal finish in the 4x400m relay. Camryn Newton-Smith finished in a three-way tie for the most points scored on the women’s side, winning both the pentathlon and the 60m hurdles for 20 points. In total on the weekend, A-State tallied eight first-place results – four each for the men and women.

Both squads posted program-record team scores, with the women winning with 138 points and the men notching 146 points. Troy finished second with 89 points while UT Arlington finished second on the men’s side with 130 points.

“We talk about championships from day one,” head coach Jim Patchell said. “That’s one of our team goals – try to be in a position to compete for championships and to win our fair share of them. We’re not shy about pursuing that and we let our recruits know that’s what we’re about. We knew we had a strong lead in the field coming in, but that doesn’t always mean a victory in the championship – we had to show up and do it. I’m proud of how our women fought from day one and I’m so happy that we came away with a victory. We took a different approach with the men, we had some people compete in three events and they rose to the occasion. I’m so proud of them.”

Tuesday began with the A-State men picking up nine points in the heptathlon, with Hayden Hampton and Ty Graser placing fourth and fifth, respectively.

In the men’s weight throw, Eron Carter earned a silver-medal finish with a best throw of 19.32m (63-4.75) while rookie Aimar Palma Simo threw a collegiate-best 18.68m (61-3.5) that ranks him seventh all-time at A-State to place fifth and earn four points. On the women’s side, Grace Flowers took silver with a personal-best 19.32m (63-4.75) that moves her up to second in program history in the event.

A-State picked up a sweep of both the men’s and women’s mile, won by Bennett Pascoe and Pauline Meyer. Pascoe’s run came after taking the 5000m on Monday night and he led a pack of three Red Wolves that finished in the top five – tallying 20 total points. Seth Waters earned a bronze-medal finish while Gregoire Saury finished fifth. Pascoe became the first A-State mile champion since Seth Bortey (2001).

Meyer led four A-State runners that scored 18 points in the event. Elizabeth Martin placed fifth, while Sammy Brainard and McKenzie Cornell rounded out the Red Wolves in sixth and eighth place. Meyer closed out her tremendous meet with a third-place finish in the women’s 3000m, running 9:45.48 that moves her up to second in program history. Sophie Leathers placed fourth in the 3000m with a personal-best 9:57.33.

Chris Hill added three points for the men with a sixth-place finish in the 60m, while Jermie Walker earned a silver medal in the men’s 400m with a personal-best 47.55 that ranks fourth in school history before notching a bronze-medal finish in the men’s 200m.

The Red Wolves then saw success in the 60m hurdles with Newton-Smith’s victory followed by a bronze-medal finish by Amari James.

Also in the sprints, Osereme Erewele placed fourth with a run of 7.64 to earn five points for the women’s squad.

The Red Wolves will next wait to see if any A-State athletes will qualify for the 2020 NCAA Indoor Championships in Albuquerque, New Mexico. Sophomore Camryn Newton-Smith currently owns the No. 9 mark in the pentathlon and the top 16 athletes and top 12 relay teams advance to the national championship meet held March March 13-14.