LITTLE ROCK -- Congratulations to A-State alumna Claudia Raffo of Jonesboro, who was named Miss Arkansas 2018 this evening at the conclusion of the 81st Miss Arkansas Scholarship Pageant at Robinson Performance Hall in the state's capital city.

Raffo, 22, is the daughter of Tommy and Paula Raffo.  She competed in the Miss Arkansas Pageant as Miss Historic Batesville.  She was crowned by the outgoing Miss Arkansas, Maggie Benton, also of Jonesboro.

She received a $30,000 scholarship provided by Ted and Shannon Boy Skokos, Citgo and the Miss Arkansas Scholarship Foundation and more than $75,000 in awards, wardrobe, transportation, and gifts.

For her talent, she performed a jazz dance to "That's Life."  Her platform is "New Life Saves Lives: Umbilical Cord Donation."

Raffo will represent Arkansas at the 2019 Miss America Pageant in Atlantic City and will make appearances across the Natural State promoting the Children’s Miracle Network, the Arkansas Children’s Hospital, her personal platform of “New Life Saves Life:  Umbilical Cord Donation” and speaking in support of the goals of the Miss Arkansas and Miss America system.

The Katie Bailey Overall Swimsuit Award, with a $2,500 scholarship given by Dr. Michael Cooper was presented to Raffo and Miss Northwest Arkansas Darynne Dahlem,  The tie was the first in the history of Miss Arkansas.

She also tied with Dahlem for the Sarah Slocum Overall Interview Award which includes a $2,500 scholarship given by Renee and Don Ed Fronabarger.  The tie was another first in pageant history.

Raffo was announced as recipient of the Service Above Self Award, in the amount of $3,000 and provided by Rotary Club #99. On the opening night of the pageant, Raffo won the "Lifestyle and Fitness in Swimsuit" preliminary award.

After completing her degree in chemistry at Arkansas State, she entered the University of Arkansas for Medical Sciences where she is a student in the College of Pharmacy. 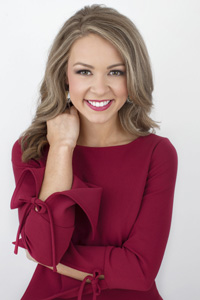