JONESBORO – Senior biological sciences major Jarrod Creameans of Judsonia gave a winning presentation during the first day of the American Chemical Society (ACS) national meeting Sunday in San Diego. He was notified Wednesday he won second place for his efforts.

Creameans discussed his research during the Agricultural and Food Chemistry Division (AGFD) Undergraduate Student Research Award Symposium, which is held in conjunction with the ACS meeting.  He received a $ 1,000 travel stipend from ACS to participate in the symposium and compete for the top prize.

While at A-State, Creameans has been working under the supervision of Dr. Fabricio Medina-Bolivar at Arkansas Biosciences Institute.  The title of his presentation is "Bioproduction and anti-inflammatory activity of delta-tocotrienol enriched extracts from hairy roots of annatto."

The undergraduate scientist can explain the project very well.

"We are using these hairy roots -- immortal roots that result from a plant infected by a specific bacteria -- of annatto (a South American plant), and manipulating their growth conditions to cause them to produce specific versions of Vitamin E," Creameans said.  "We are extracting those versions of vitamin E, along with other chemicals, from the roots and will test the extracts alongside the pure forms of vitamin E to assess whether our extracts are better at decreasing inflammation than the pure forms."

The Chancellor's List student is clear about his project's potential benefits.

"If our hypotheses are correct, we will have a new method of producing a source of these forms of vitamin E that will eventually lead to a new vitamin E supplement," he continued.  "The new supplement will be more potent than current supplements in terms of preventing inflammation within the body, which eventually can lead to cancer."

Creameans is a recipient of the License to Howl Scholarship, awarded by the A-State Alumni Association. 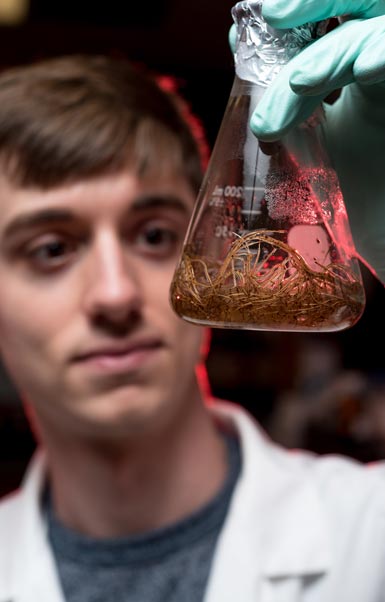 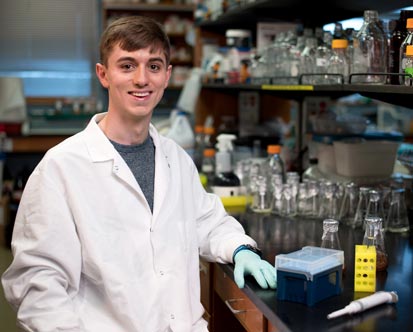