The award recognizes individuals who make significant commitment to the advancement profession, both by service to their institution and volunteer service to CASE and CASE District IV.

An A-State alumna with bachelor’s and master’s degrees, Smith came to A-State in 1992 as assistant director of alumni relations and was promoted to executive director in 1997. She oversees the operation of the Department of Alumni Relations and serves as executive director of the A-State Alumni Association.  Additionally, she has served in several volunteer capacities for CASE District IV, including as a member of their board of directors and board chair from 2006-2008. In 2003, she served as chair of the CASE District IV annual conference, which was held in Little Rock. Currently she is serving as a trustee for CASE, headquartered in Washington, D.C. and as chair of the Chairs Council working with the leadership of eight districts spread across the US and Canada.

“Cardinal Newman once said an alma mater knows her children one by one,” said Chancellor Tim Hudson.  “The same is true of an outstanding alumni association director. For graduates of Arkansas State University, Beth Smith has served as the friendly face, the welcoming voice and the fellow classmate who represented the institution to our tens of thousands of alumni.

“In a world filled with metrics, I could point out she has seen our alumni giving reach new highs in recent years, but that isn’t the true measure of her value to Arkansas State. Her service to A-State has touched generations of Indians, and now of course, Red Wolves, who remain connected to their university through her organization.”

The Council for Advancement and Support of Education is a global organization serving educational institutions in North America, Europe, Asia-Pacific, America Latina and other regions by helping its members build stronger relationships with their alumni and donors, raise funds for campus projects, produce recruitment materials, market their institutions to prospective students, diversify the profession and foster public support of education. CASE District IV is composed of institutions of higher learning in the states of Arkansas, Louisiana, New Mexico, Oklahoma and Texas. 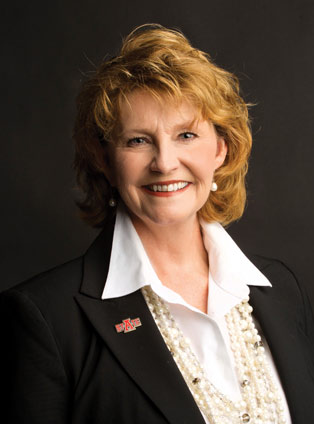