JONESBORO -- A new set of exhibitions will open on Thursday, March 10, at the Bradbury Art Museum on the campus of Arkansas State University.  “BElieVE” will feature thoughtfully conceived and meticulously executed objects by Greely Myatt. Long known for his unique humor and ability to readily make his point, these easily accessible yet intellectually satisfying works provide insight into the artist's observations of our complex world.

Two additional exhibitions, which also open that evening, are “Guy Church: Drawings” and “Pure Line,” which is selected from the A-State permanent collection and features a series of prints by Donald Judd and linear steel sculptures by Tony Rosenthal.

Greely Myatt, a well-respected fixture of the Memphis art scene, has been creating sculpture and installations for decades.  Currently he is a Professor of Art at the University of Memphis where he has taught since 1989. His artwork has been shown in numerous solo and group exhibitions across the United States and abroad. Attesting to his prowess as artist and visual communicator, he has received many grants, fellowships and awards. In 2009 a series of citywide exhibitions were held in Memphis to honor this highly regarded sculptor.

In a statement about this exhibition the artist said, “My process when putting together a show is to start with the title which I often make as a piece. In this case the initial title was taken from a rubber stamp that I had found some years back. The stamp read: “Absolutely No Warranty Given Or Implied.”  The release from responsibility this suggested interested me, however I wanted a quicker title. Somewhere I had read that in the middle of the word BELIEVE is the word LIE. It seemed to be the same: “Believe me but I’m not responsible”.

Myatt’s fabrications began with carving, first in stone then in wood. For a variety of reasons he tired of restricting himself to this relatively limited practice, so assemblage and found objects entered his work. This logical flow has culminated in what we see today, a hybrid of impeccable craftsmanship and carefully selected repurposed and or traditional materials.

All works in the exhibition are on loan from the artist and David Lusk Gallery in Memphis, Tennessee. The exhibition runs through April 13.  Myatt will give talk on Tuesday, April 5 at 6 p.m. in the Bradbury Art Museum. The public is invited.

BAM hours are noon to 5 p.m. Tuesday through Saturday, 2 to 5 p.m. on Sunday, and by appointment.  BAM follows A-State’s schedule and will be closed during spring break from March 20th through the 27th. The exhibition, the reception and the artist’s talk are admission-free and open to the public.  For additional information please contact the museum at (870) 972-2567. 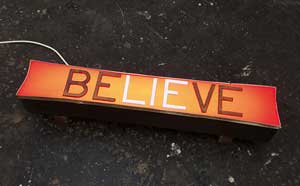 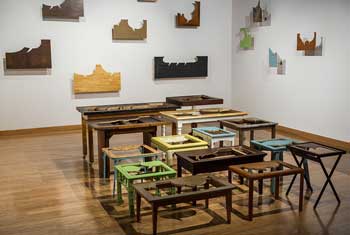