JONESBORO – Arkansas State University alumni Buddy and Charlotte Beck have funded endowed scholarships in honor of Dr. Susan Hanrahan, dean of the College of Nursing and Health Professions, and Dr. Robert Potts, former A-State chancellor,  in recognition for their service to the Beck Center for Veterans.

The Becks provided a significant gift to establish the Beck PRIDE Center, now known as the Beck Center for Veterans, in 2007. The program’s mission is to provide combat-wounded veterans with first-class educational programs and services at Arkansas State University. These include, but are not limited to, resources to access the higher education experience, counseling services, personal rehabilitation, advocacy and financial assistance to help support veterans achieve their post-military service goals.

“What a wonderful and thoughtful gift from the Becks not only because it adds to our long-established ability to assist veterans, but it honors the commitment and work by two of our great A-State supporters of the outstanding work done by the Beck Center for Veterans,” Chancellor Kelly Damphousse said.  “Our local veterans and our veteran students remain forever in the debt of Charlotte and Buddy for creating the initial gift which established the center, but we also know without the dedicated effort by Dean Hanrahan and former Chancellor Potts we would not have the great track record of service to veterans.”

Dr. Robert Potts was selected in 2006 to serve as the first chancellor at A-State. The Becks, of Fairfax Station, Va., established The Beck Center for Veterans in 2007 through their generous gift of $1 million. Dr. Potts worked diligently with the Becks and Hanrahan to help get the Beck Center off the ground at Arkansas State by assisting veterans returning from the battlefield.

In a 2007 First Friday monthly chancellor’s report, Potts noted, “These citizen soldiers and career military professionals, generally without being consulted by our civilian leaders who make the decisions to go to war, volunteer to place themselves in harm’s way, leave their families, and often suffer financially, in order to preserve freedom for the rest of us who continue to go about our daily lives.”

The Dr. Robert Potts Endowed Scholarship will go to a veteran student who is either majoring in engineering, who plans to take a pre-law curriculum and attend law school, or who is majoring in political science with intentions to enter public service of some type, either appointed or elected. Qualified scholarship candidates are incoming freshman veterans with a 3.0 GPA in high school or undergraduate veterans with a record of college courses who have applied for a privately funded scholarship through the A-State portal.

Dean Susan Hanrahan announced her retirement effective June 30, 2021, after serving 25 years at the university. Dr. Hanrahan and Dr. Potts oversaw the early stages of the Beck PRIDE Center, A-State’s signature university program created after she and Potts worked with Beck’s concept, calling the program “absolutely the best program I was ever involved with developing.” Dr. Hanrahan watched the program progress and thrive.

Buddy Beck graduated from A-State in 1959 with a Bachelor of Arts and Sciences degree in chemistry, later receiving a Master of Information Systems degree from the University of Southern California, and a fellowship at Brookings Institute in Washington, D.C. Following public service, he launched a business career in advanced research and engineering. He was awarded three patents in computational engineering and advanced sensors, founding a number of companies involved in energy, defense and medical technology. Charlotte Beck attended Arkansas State, studied business, was a member of AOPi sorority, and later awarded an Honorary Doctorate in Humane Letters.

In addition to the Hanrahan and Potts scholarships, the Becks have also established numerous other scholarships, funded grants for academics and buildings, pledged to fund a professorship the College of Engineering and Computer Science, and made countless contibutions in memory of those special to them and the university, placing them among the top individual donors to Arkansas State. 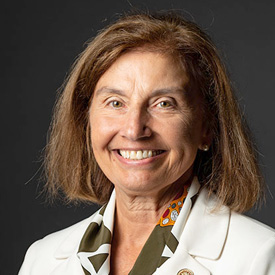