PIGGOTT, Ark. — As part of his ongoing critically acclaimed undertaking to retype 100 classic novels, artist Tim Youd continues his novel series beginning Tuesday Feb. 4, and running through Wednesday Feb. 12, at the Hemingway-Pfeiffer Museum, 1021 W Cherry St. in Piggott, with a performance of Ernest Hemingway’s “A Farewell To Arms.”

Over a five-year period, Youd is retyping 100 novels and will spend nine days in Hemingway’s studio at the Hemingway-Pfeiffer House working on “A Farewell To Arms.” He performs the retyping of each entire novel on a single piece of paper, utilizing the same make and model typewriter used by the original author.

He covers the paper with a top sheet, so that the underlying page receives the indentation from the keys but not the ink, except where the typewriter keys break through the top sheet. The result is a highly formal yet very surprising diptych – the top sheet densely covered in ink, mirrored against a heavily indented but mostly un-inked page.

Hemingway was and remains one of the giants of 20th century literature. For his second novel, “A Farewell To Arms,” Hemingway drew on his own experiences as an ambulance driver in World War I. Published in 1929, the novel became his first best seller and cemented Hemingway’s reputation as a leader of modern literature.

At the time of its writing, Hemingway was newly married to his second wife Pauline Pfeiffer. While she was expecting their first child, Pauline and Ernest settled in at her family’s home in Piggott. It was during this time there that Hemingway wrote the majority of “A Farewell To Arms.” The home is preserved today as the Hemingway-Pfeiffer Museum. 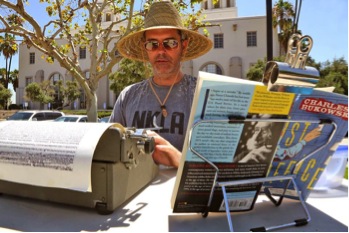