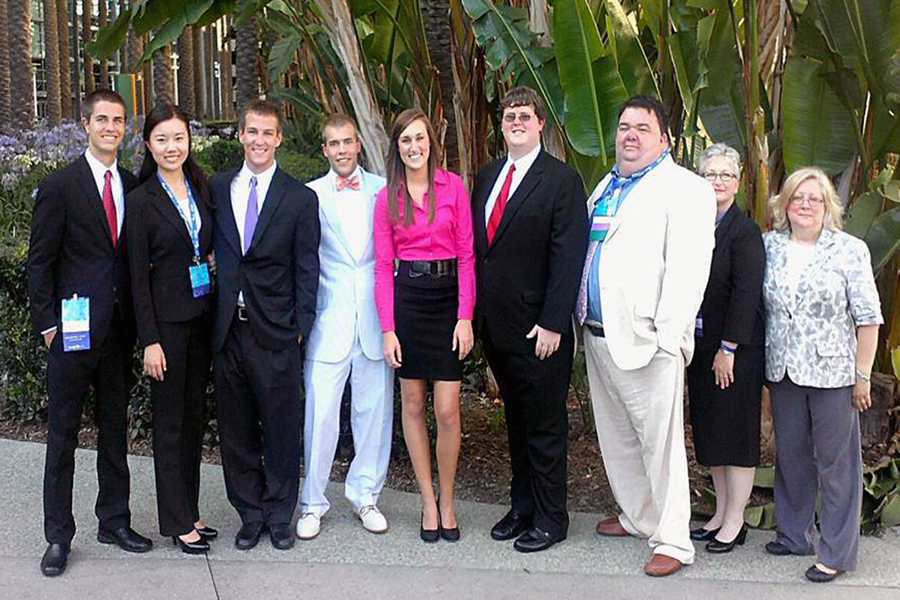 JONESBORO, Ark. — Members of the Arkansas State University chapter of Phi Beta Lambda, the collegiate version of Future Business Leaders of America, recently had their names up in lights in Southern California. Ten members and three advisers attended the National Phi Beta Lambda Leadership Conference and Competition in Anaheim, Calif., where the students excelled in academic competitions against some of the top undergraduate universities in the nation.
The members walked away from the competition with 15 awards and recognitions, the most of any college or university in Arkansas. These awards included two first place awards, allowing ASU to be one of only three schools in the country to achieve this honor along with the University of California-Berkeley and the University of Pittsburg. The ASU chapter was recognized as the seventh largest chapter in the U.S.
“I think it is a great testament to Arkansas State University how these students were able to not only compete with students from larger universities, but to defeat them in these academic competitions,” said Dr. Philip Tew, assistant professor of Finance. “These students would be able to excel anywhere they wanted to attend, and they chose ASU for their world-class education."
Brett Harris, of Harriet, Ark., and Mountain Home High School, former National Phi Beta Lambda treasurer, was named to Who’s Who in Phi Beta Lambda, recognized for his achievement in the Career and Membership Achievement Program (CMAP), won ninth in the nation in Business Communications, and third in the nation in Marketing Concepts. Harris, the 2013-14 local chapter president, is a junior marketing major.
Mallory Green and Benjamin Green, both of Jonesboro and Jonesboro High School, took third in the nation in the Community Service Project. The project consisted of the chapter’s diaper and wet wipe drive that benefited PACES, Inc. (Parent and Child Educational Services) of Jonesboro. The project resulted in over 2,600 diapers and 1,600 wet wipes being collected. Mallory, the 2013-14 local chapter vice-president, is a junior accounting and marketing major, and Benjamin is freshman marketing major.
Vicki Buck, of Memphis, Tenn., took seventh place in the nation in IT Help Desk, and sixth place in the nation in Future Business Educator. Buck is a 2013 graduate of ASU with a degree in business technology and will pursue her career as a business instructor in the West Memphis School System in the fall.
Aaron Carroll of Jonesboro and Nettleton High School, former chapter, state, regional and national Phi Beta Lambda officer, was named to Who’s Who in Phi Beta Lambda and won third in the nation in Future Business Executive, the top award in Phi Beta Lambda. Carroll is the founding member of the ASU Chapter of Phi Beta Lambda, is a 2013 graduate of ASU with a degree in chemistry and will begin pursuit of his Masters of Public Health degree at the University of Arkansas for Medical Sciences (UAMS) in Little Rock this fall.
Jeffrey Cone, of Harrison, Ark., and Alpena High School, won fifth place in Economic Analysis and Decision Making and first place in the nation in Macroeconomics. This first place win was one of only four earned by Arkansas colleges and universities. Cone is a junior economics major.
Yuchen Duan, of Guangzhou, China and Guangdong Zhongyuan High School, and Andrew Todd, of Fort Smith, Ark., and Union Christian Academy, won third place in the nation in accounting analysis and decision making. Yuchen is a junior accounting major.
Todd, a former chapter and state president, was recognized for his participation in Membership Mania, and won first place in the nation in Future Business Executive, the top award in Phi Beta Lambda. Todd has been active in Phi Beta Lambda during his four years in college competing in the National Phi Beta Lambda conference and competition all four years in the maximum two events. He has placed in the top 10 nationally, the maximum number of eight times in his collegiate career including two first place awards. Todd graduated in 2013 with a double major of accounting and finance, and has begun his career as an accountant in Rogers, Ark. with Beall Barclay and Company PLC.
The ASU chapter of Phi Beta Lambda was reactivated in 2008 with four members and two advisers, and two of the members being eligible and attending the National Conference. In 2013, the chapter has grown to 93 members and three advisers.
News Article
Search A-State
Contact University Communications