JONESBORO, Ark. — In only its second year of existence, Arkansas State’s softball program has experienced quite a bit of success and has been recognized for its efforts by the city of Jonesboro via Mayor Harold Perrin’s proclamation.

The proclamation, issued May 28, reads:

WHEREAS: Jonesboro is blessed to be home to Arkansas State University; where ASU has an abundance of talented student-athletes who succeed in their studies as well as on the collegiate playing field. Among these student-athletes stands an elite group of young women; and

WHEREAS: The ASU Women’s Softball Team carried a record of 29 wins and 9 losses this season; they are also the first team to play a game on the ASU campus; they are the first ever NCSA (National Club Softball Association) Conference champions in Lady Red Wolves history; 2013 was first ever NCSA World Series berth and most wins at 3 in the NCSA World Series. They also have the best finish in the NCSA with 6th in the nation; and

NOW, THEREFORE, I Harold Perrin, Mayor, by virtue of the authority vested in me by the laws of the State of Arkansas and the citizens of Jonesboro do hereby recognize and honor the

For their 2013 NCSA Championship and their success both on and off the field.

IN TESTIMONY WHEREOF, I have hereunto set my hand and affixed the Seal of the City of Jonesboro this 28th day of May in the year of our Lord 2013.

The document is signed by Harold Perrin, Mayor.

The team, founded in 2011, advanced to the National Club Softball Association (NCSA) World Series, May 17-19. ASU, seeded eighth in the field and ranked ninth nationally in the NCSA poll, excelled in the16-team double elimination tournament. The Red Wolves, winners of the Mid-American South Conference, played six games in a two-day period and winning three.

The Arkansas State squad opened play with 16th-seeded Central Florida and handed the Knights a 4-1 loss. A 3-2 setback to Ohio State came that afternoon. A-State took on top-seeded Air Force and defeated the Falcons, 6-4. One of the most exciting victories came against Navy with a 10-0 win in five innings.

The Red Wolves finished sixth overall in the tournament, but made their presence known. Their final overall record is 29-9 and the program is currently ranked sixth in the NCSA poll. 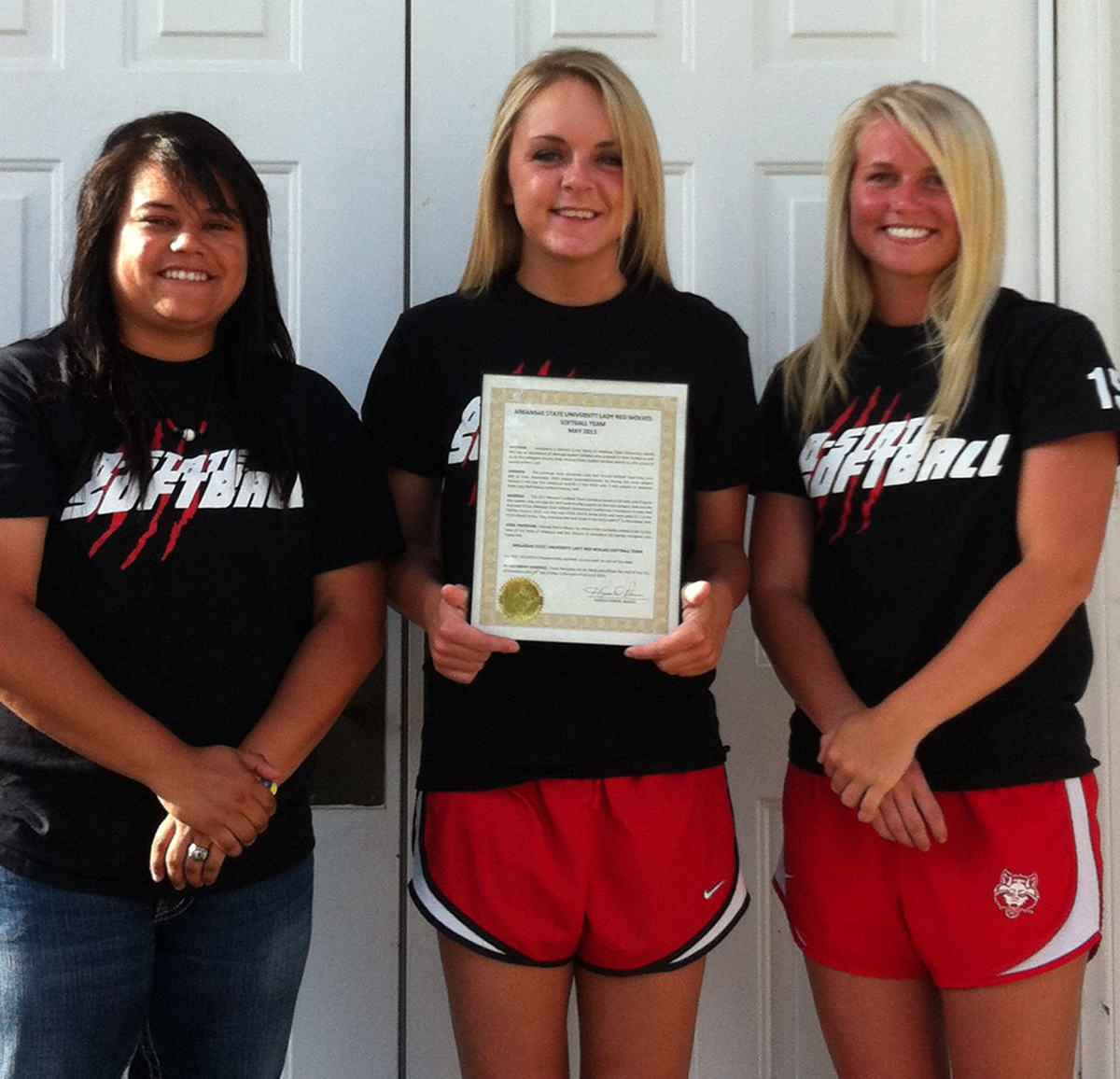