A-State scored in the opening few minutes and the last eight, while Davenport controlled the run of play most of the rest of the game.

The Red Wolves’ opening try by lock Zack Allen came after a big run from Shaun Potgieter put them in the attacking end. The conversion attempt was missed, putting Arkansas State up, 5-0.

It took Davenport four trips to the try zone to get on the board. The Panthers knocked-on around the goal line twice and were held up once before the Panthers’ Dominique Bailey finally touched the ball down. The conversion was missed, and Davenport and Arkansas State were knotted at 5-5 going into intermission.

Bailey was a menace with ball-in-hand all day, and he was given a great platform to run by the tight five. Anchored by tight head prop Angus MacLellan and hooker Gabe Sochanek, Davenport’s scrum was dominate. Arkansas State struggled to defend Bailey’s runs from the base or get go-forward on its own put-ins.

The Panthers left numerous scores on the board in the meat of the game, and it would come back to bite them. All-everything flyhalf JP Eloff tore his ACL and MCL in January, and the Panthers severely missed his trusty boot, as several opportunities to kick for points went unutilized.

Arkansas State nearly scored the tying try on a counterattack. Outside center Gavin Brown had burst up the touch line and past all but one defender, but the pass to put inside center Michael Baska away was a half-second too late.

Brown looked like he had once again scored the tying try near the 80th minute, when he danced through a hole and into pay dirt, but the score was called back for obstruction.

The Red Wolves did finally get the leveling try in the 82nd minute when flyhalf Cody Crawford forced his way into the try zone from short distance.

“We swung it to the right, and I saw there was an opening at the left side of the ruck,” said Cody Crawford, recalling his try. “I called for the ball, and there was a man in front of me. I had to bounce through him and put it down.”

Crawford then lined up the go-ahead conversion and casually put it through the sticks to give A-State the 12-10 lead with just over five minutes to play.

Davenport strung together a few phases and worked the ball into the attacking end, but a penalty on MacLellan for holding onto the ball saw possession go back to Arkansas State. The Red Wolves reversed field, and Crawford nailed a penalty to extend the lead to 15-0 with a couple of minutes left.

Davenport couldn’t muster another offensive, and the Red Wolves escaped with a win.

Arkansas State, like Davenport, saw its highly regarded flyhalf go down for the season before it began. Zinzan Elan-Puttick is out with a broken hand, and Crawford, a fifth-year senior who spelled now-departed All American Pat Sullivan for four years, responded well when his number was called – scoring the game-winning try and conversion.

“I’ve been on the b-side for the last four years, stepping in once in a while for a-side, but this year I was backup for the a-side flyhalf,” said Crawford. “He went down, so I had to step in, and it felt great.”

The result improves Arkansas to 1-1 in the Mid-South and 2-1 overall and drops Davenport to 0-1. 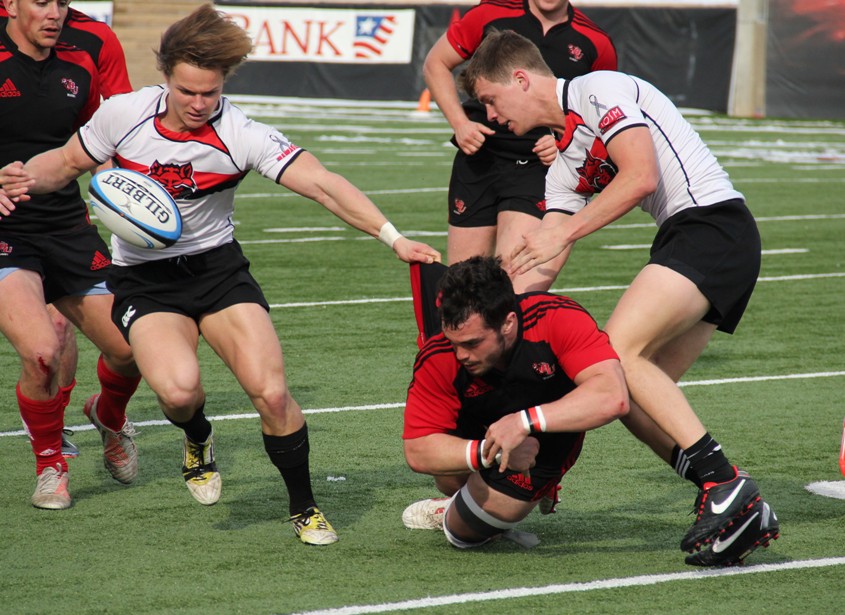