Preliminary rounds begin at 3 p.m. on Friday in Wilson Hall on the A-State campus. There is no admission fee, and all rounds are open to the public.

Eleven former A-State Moot Court students who are now in law school or practicing law will return to campus to judge this weekend. A panel of former moot court team captains will serve as judges. Two of them, Abram Skarda and Jervonne Newsome, have accepted federal court clerkships. The third, Lilia Pacheco, is in her second year at the University of Arkansas-Fayetteville School of Law. Local volunteer attorneys round out the group that will judge the undergraduate competitors.

“This is our first time to host a tournament on campus,” said team coach Dr. Hans Hacker. “The response from area law schools and from our graduates has been unbelievable. The competition will be quite fierce this weekend. We’ve got a great slate of teams competing for bragging rights.”

Recently, A-State seniors Nikki Clark of Blytheville and Bryant Moy of Jacksonville won impressively at the Southern Methodist University tournament at the SMU Dedman School of Law in Dallas, Texas. On their way to the finals, Clark and Moy defeated two teams of Texas A&M University undergraduates. They defeated a team from the University of North Texas in the final round. The pair also brought home the two top speaker awards.

“Nikki and Bryant finish their collegiate careers ranked among the most successful competitors the team has put forward in its seven years of existence," Hacker said. “They represented A-State tremendously at SMU and all year long.”

“The Arkansas State Moot Court team is truly first class,” said Dr. William McLean, Chair of the Department of Political Science. “This program provides a great academic experience, one that brings a lot of recognition to the university. It provides students with a skill set that will serve them for a lifetime.”

Dallas, Texas attorney Andy Sommerman, who founded the American Collegiate Moot Court Association, served as a judge during the final round of the SMU tournament. He was highly complimentary of Nikki’s presentation, telling her that in his 30 years judging law school and collegiate moot court, he had never scored someone as high on answering questions as he scored her.

For more information, contact Dr. Hacker (hhacker@astate.edu), or call the College of Humanities and Social Sciences at (870) 972-3973. 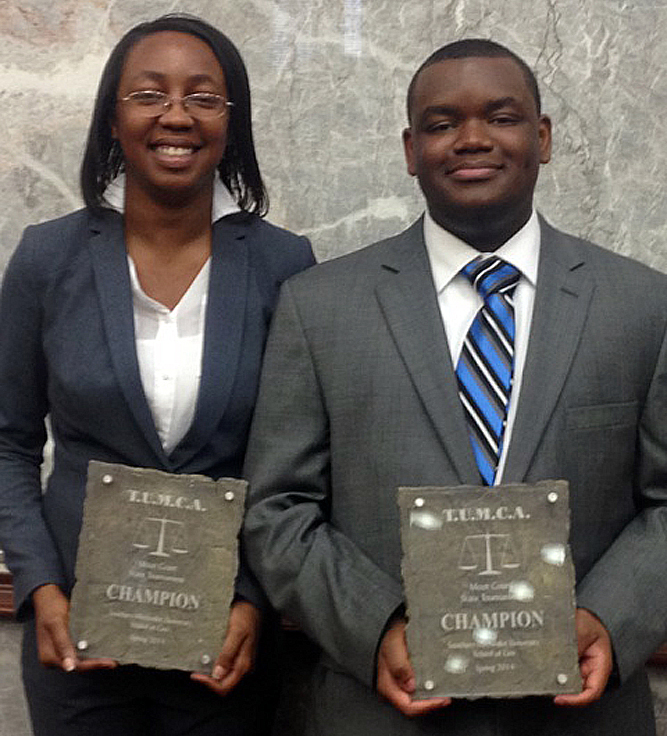