NASHVILLE, Tenn. — Bill Carter, a legend in the music business world and one of the driving forces behind the restoration of the boyhood home in Dyess of the late singing great Johnny Cash, has been honored twice in one week by his home state of Arkansas.

Carter, who was inducted as one of Arkansas State’s Distinguished Alumni in 2011, learned that he would also be inducted into the Arkansas Entertainers Hall of Fame during a ceremony set for June 8 in Hot Springs. In addition, the Arkansas Department of Parks and Tourism recently awarded Carter the Crystal Award in recognition of his work with ASU to restore Cash’s boyhood home.

“I want to thank the Department of Tourism for this prestigious honor and I accept this award on behalf of [Cash’s children] Rosanne and John Carter Cash, Kirkley Thomas, whose idea the restoration was, Ruth Hawkins and Paula Miles of ASU, who took the idea and ran with it, Christy Valentine, Derek Bowman, the entire ASU and Convocation Center staff, and the hundreds of volunteers who worked hard to make the festival a success," Carter said in accepting the Crystal Award.

Carter produced the first two Johnny Cash Music Festivals, both held in ASU’s Convocation Center in 2011 and 2012. His expertise at producing such an event as the concerts and his relationships with country music talent as Kris Kristofferson, Willie Nelson, Dierks Bentley, Rosanne Cash and others helped to raise funds for the restoration process. Along with the home, the project includes a theater and administration building.

Carter, who grew up in Rector, was appointed as a Secret Service agent for John F. Kennedy and later President Lyndon Johnson. He is also an attorney and served in that capacity for the Rolling Stones as well as Reba McEntire and other music stars. 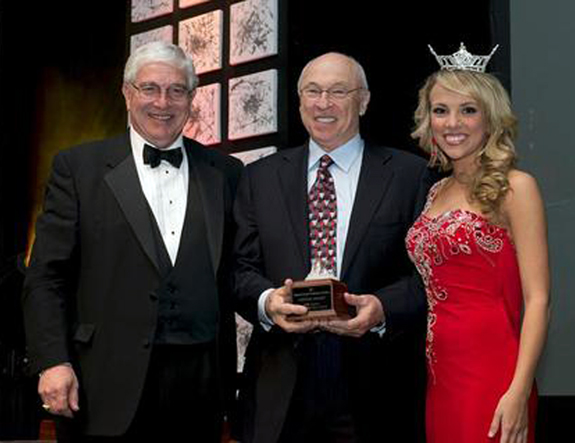