The win improves the Red Wolves to 17-0 in Sun Belt Conference play, the nation’s fifth-longest win streak. A-State runs the home win streak to 23 games and now has 23 victories in its first 26 games (23-3), the most in school history. Texas State falls to 12-14 on the season and 7-9 in conference play. 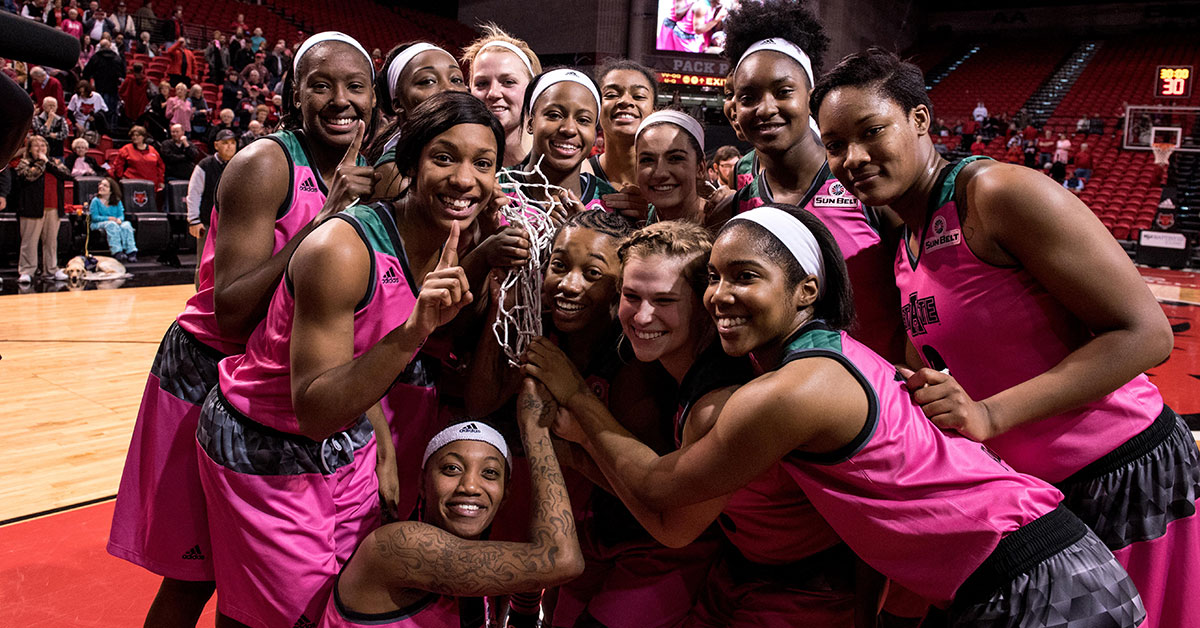 Khadija Brown-Haywood scored 20-plus points for the fourth-straight outing and 10th time this season with a game-high 22 points. She pulled in a game-high nine rebounds as well, just missing out on her 12th double-double. Aundrea Gamble added 16 points, four rebounds and six assists.

“It was great to get this thing out of the way,” A-State head coach Brian Boyer said. “I’m proud of this team for getting another win tonight and then obviously for wrapping up this championship and getting this out of the way so we can move forward.”

After outscoring Texas State 20-10 in the second quarter, the Red Wolves used a 26-8 third quarter margin to overwhelm the Bobcats. A-State shot 50 percent (8-16) in the third frame with Jessica Flanery hitting two 3-pointers. The Red Wolves defense held the Bobcats to 3-for-13 (23.1 percent) in the quarter. Amanda Lawson had eight points and four rebounds in the period, while going 3-for-3 and Gamble posted eight points, two assists and two steals in the third quarter alone.

Brown-Haywood scored 11 points in the second period to help A-State outscore the Bobcats 20-10. Texas State was held scoreless for 5:02 after scoring the first bucket of the second quarter and the Red Wolves used a trey and old-fashioned three-point play by Gamble, plus a jumper from Brown-Haywood, to cap an 8-0 spurt. The 8-0 run gave the Red Wolves their first 10-point advantage of the half.

“I was very pleased with the effort from start to finish,” Boyer said. “We have played well recently, but that is probably as hard as we have played in a long time.. I just didn’t think we were getting rewarded for how hard we were playing. We didn’t get some rebounds that we should have, but that effort and intensity on the defensive end paid off as the game went on and they made a lot of turnovers in the third quarter that appeared to just be fatigue turnovers where they got tired and then we were able to take advantage of that. So, I am really pleased from start to finish with the effort. It wasn’t always great and it wasn’t always perfect execution, but the intensity was perfect.”

The Red Wolves have now two out of the last three regular season Sun Belt Conference championships and will have the No. 1 seed going into the SBC Tournament in two weeks.

A-State wraps up the its regular season home slate Saturday against UT Arlington. The Red Wolves will honor their five seniors before the start of the game, which is scheduled to tipoff at 3 p.m.

Tickets are on sale for all remaining home games. For more information, visit AStateRedWolves.com/Tickets.