JONESBORO – Two business plans submitted by Arkansas State University students are finalists in the “Clash for the Cash” Donald W. Reynolds Governor’s Cup competition. Nathan Bailey and Hunter Travis will deliver elevator pitches in the Governor’s Cup awards luncheon, Tuesday, April 11, in the Wally Allen Ballroom of the Statehouse Convention Center in Little Rock. The elevator pitch competition will award $2,000 to the winner.

Both teams are competing for a first prize of $25,000 in the business plan category and $5,000 in the agricultural division.

The awards luncheon will be streamed live on dwrgovernorscup.org at 11:30 a.m.

Travis, Andrew Roach, Kevin Garner, Jr., and Lauren Patterson advanced with their idea “Pasture Parent.” Pasture Parent is an alert system to monitor calves’ births. Travis, a management major and animal science minor, came up with the idea after suffering the loss of several cattle that prevented him from financing his college education.

Bailey, an agriculture major who is offering services to farmers in irrigation systems, presented the second finalist, “Waterbug Irrigation.” Bailey, the sole owner, is currently selling his patent pending product, the Bailey Patch, to solve polytube blowouts in farms’ irrigation systems. He entered the competition with the expectation of attaining the funds to expand operations and fill out its pending orders.

“We have never placed an undergraduate team in the final round since Susan Kronk with Nature West did in 2008, ” said Dr. Erick Chang, associate professor of management and adviser for the Governor’s Cup competition. “This year we have two finalists with good chances for meeting our goal to take first and second place and compete in the Tri-State competition in Las Vegas.”

Chang also noted that A-State students have won more than $50,000 over the last 10 years.  A-State teams advanced to the agriculture division finals for the last three years, and the winner of the A-State business plan competition has advanced to the next rounds in the Governor’s cup for the last five years. The Donald W. Reynolds Foundation is sponsoring the cash prize pool of $154,000, one of the largest collegiate business plan prize pools in the U.S. 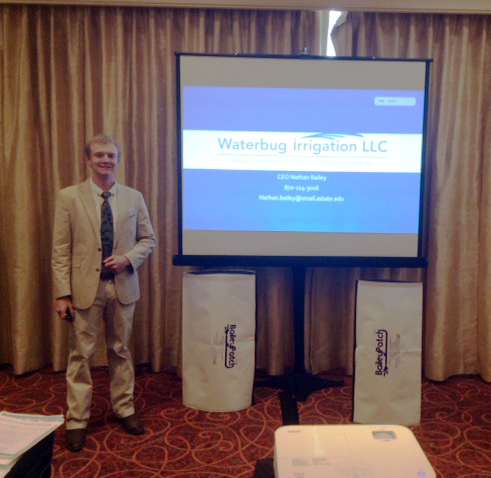