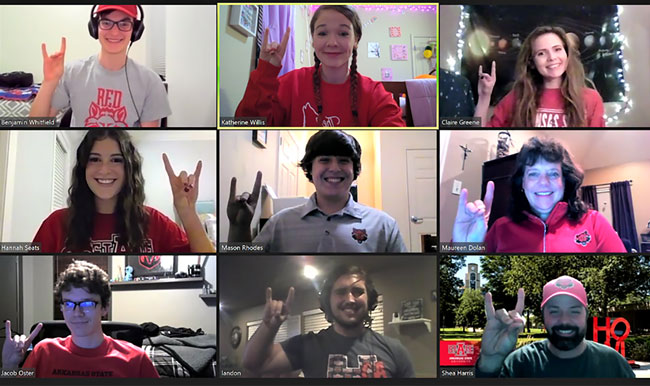 NASA, as in the National Aeronautics and Space Administration, was assigning the grade.

The team, calling themselves the A-State Science Support System, stepped into their WebEx timeslot, following students from Columbia University and Notre Dame, to present their experiment proposal to NASA scientists.  Then they waited.

At 2:56 p.m. Monday, joy erupted among the team members as they opened their email from NASA to find the news for which they were waiting.

Their Student Payload Opportunity with Citizen Science (SPOCS) project was selected by NASA's Office of STEM Engagement as one of five in the country to be carried out in 2022 on the International Space Station.

Entering the second phase of the competition as one of 10 finalists, the A-State team's project was among five selected for funding with a $20,000 NASA grant.

A-State's team is featured in the announcement on NASA's Tumblr page, along with the other winning teams, from Columbia, Stanford, University of Idaho, and University of New Hampshire at Manchester.

Titled "Microgravity Environment Impact on Plastic Biodegradation by Galleria mellonella," their proposal is described as an experiment to discover the ability of wax worms to degrade plastics in space. Knowledge gained through the ISS experiment could provide the answers for more a sustainable environment on earth and future, long-term space travel.

Some time ago, Dr. Tom Risch, vice provost for research and technology transfer, encouraged Shea Harris, Arkansas Biosciences Institute outreach director, and Dr. Maureen Dolan, associate professor of molecular biology and director of the biotechnology program, to form and mentor a group of student scientists to develop an SPOCS proposal with one of two optional emphases, antimicrobial or sustainability.

They called on Rebecca Oliver, director of the Honors College, to help recruit a group of sophomore Honors students majoring in engineering and biology to brainstorm and write the grant proposal.  Several of the students are planning to integrate this project into their Honors thesis project.

"I am so very proud and impressed with the dedication, creativity, talent and grit demonstrated by this group," Dolan told the team of students.  "I am humbled to be your faculty adviser and look forward to working with you on this amazing opportunity and project."

As Citizen Science partners, the team chose the Nettleton STEAM School students, who by coincidence were talking to two of the ISS astronauts on the same day they were making the SPOCS presentation. The STEAM students in third through sixth grade will perform baseline Earth-gravity controlled experiments to compare with A-State ISS experiments.

"We are still in the conceptual phase, but will hit the ground running after winter break," Harris said.  "The wax worm (Galleria mellonella) larvae hit the news cycle in 2017 when the discovery of its ability to degrade plastic was first published." However, its ability to accomplish this in microgravity is still unknown.

While the team developed their proposal, they did not get access to the specifications of the required container for the space station until they became a finalist in the selection process.

Now they know, the container is 10 by 10 by 15 centimeters, or about 91.5 cubic inches, so making the science payload fit in such a small space is part of their challenge.  The experiment has to be completely automated; the ISS astronauts will not interact with it.

"I want to recognize and thank the Nettleton STEAM faculty Principal Cathelene Gray and Kelli Cochran  and the Nettleton STEAMers as your successful existing NASA curriculum program and role with the outreach/citizen science on this proposed project we believe was one of our selling features," Dolan added.  "We can’t wait to work with your students on this project."

She and Harris also thanked A-State faculty members Dr. Ilwoo Seok in mechanical engineering and Dr. David Gilmore in biological sciences for their gift of time and talents in helping the A-State students develop the idea and scientific method for the proposed project, along with Luna Acosta, Catalyst incubator manager, for helping prepare the students to make their winning presentation.

In the notice of selection, NASA informed the team the ISS has housed more than 2,800 experiments, and research in the microgravity environment is as important as ever.

The next step for A-State's SPOCS team will be a virtual kickoff meeting Wednesday, Jan. 20.  They will review NASA's timelines and milestones for the project, along with meeting mission managers and NASA mentors.

Those interested in watching the SPOCS selection announcement on social media may view it on NASA’s Instagram channel.