The Sun Belt Conference (SBC) contest represents the first of two 2013-14 regular-season meetings between the two instate schools with opening tipoff scheduled for 7:05 p.m. (CT). Prior to the men's game, the women's teams will square off on the hardwood starting at 3:05 p.m. (CT).

Arkansas State, under head coach John Brady, has presently registered a 10-7 overall record with a 3-3 mark in the Sun Belt Conference. The Red Wolves, who have posted a 5-2 ledger at home this season, have won five of their last eight outings to date. Coach Brady along with members of coaching his staff will be wearing sneakers with their dress suits for this Saturday's game as part of National Association of Basketball Coaches (NABC) Coaches vs. Cancer Suits and Sneaker Awareness weekend throughout the nation.

UALR, coached by Steve Shields, is 9-9 overall and 4-2 in the conference this season going into this Thursday's (Jan. 23) league home contest versus league newcomer Texas State at the Trojans' Jack Stephens Center in Little Rock, Ark. UALR has won five of its last seven encounters to date.

The instate tilt will feature an appearance by the three-time (2011-13) Sun Belt Conference Champions and two-time (2012-13) defending GoDaddy Bowl Champions the A-State football team at the first media timeout in the men's contest. At halftime, former A-State men's basketball players and coaches will be recognized as part of this weekend's (Jan. 24-26) A-State Letterman's Reunion.

The Sun Belt Conference's #NOLABound Tailgate Tour, presented by Cook Me Somethin' Mister! and Blue Rhino, will be making a stop at Arkansas State University this Saturday to promote the upcoming 2014 SBC Men's and Women's Basketball Championships set for March 12-16 in New Orleans, La., and all Red Wolves' fans are encouraged to attend the festivities.

Tickets for this Saturday night's matchup and for all remaining 2013-14 A-State home contests may be purchased by contacting the A-State Central Box Office at 870-972-2781 or 1-888-ASU-FANS. Tickets are also available for online purchase by visiting www.astate.edu/tickets.

The game will also be carried live throughout Northeast Arkansas on the EAB Red Wolves Sports Radio Network via flagship station KFIN 107.9 FM with Matt Stolz calling the action.

A live audio and video pay-per-view webcast from StateZone will also be available for both A-State men’s and women’s games this week in addition to live internet statistics and Twitter scoring updates. Please visit the official A-State Athletics Website homepage at www.AStateRedWolves.com and click on the “upcoming events” tab in the schedule area for links to all available coverage. 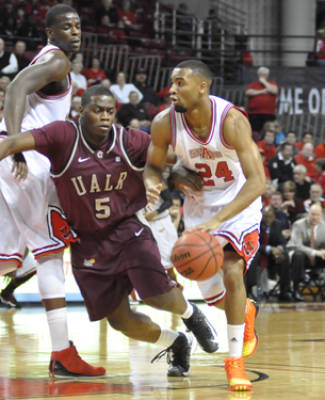 We've all had those dates that we'd like to forget. Each year, the UALR game reminds Howl of a promising relationship gone horribly wrong.