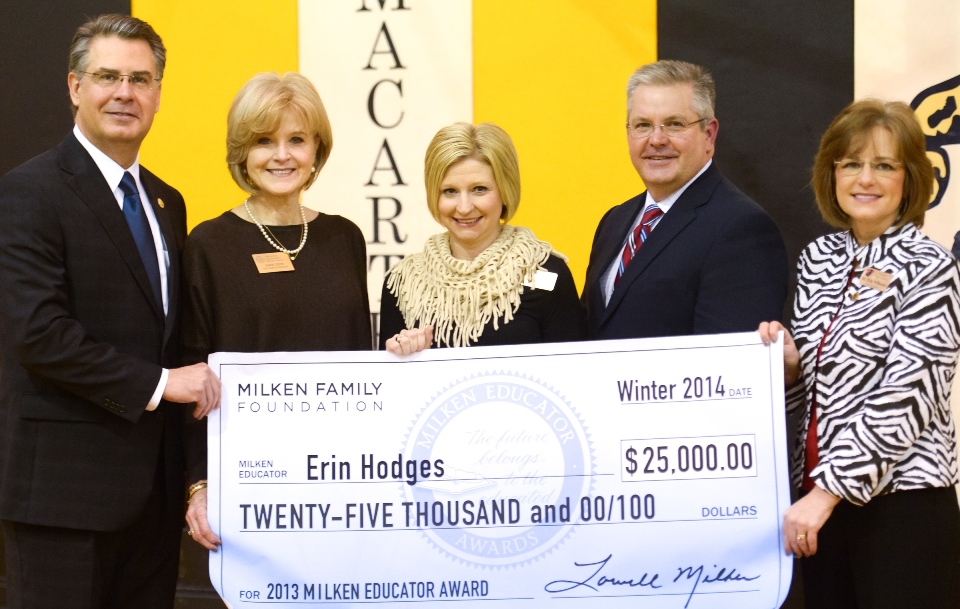 New Milken Educator Erin Hodges (center) is surrounded by her new colleagues: representatives of the Arkansas education system and the Milken Educator Network. Dr. Kim Wilbanks (right), Superintendent of the Jonesboro School District, represents both, wearing her Milken Educator pin.  Others in the photo (from left) are Dr. Gary Stark, president and CEO, National Institute for Excellence in Teaching, and a 2001 recipient; State Board of Education Member Diane Zook; and Arkansas Commissioner of Education Dr. Tom Kimbrell. Photo courtesy Milken Family Foundation.

JONESBORO – Many, many people learned today what Erin Byerly Hodges’s colleagues and former professors at Arkansas State University have known for a long time . . . she is a terrific teacher.

The latest confirmation came in the form of a $25,000 Milken Educator Award from the Milken Family Foundation, a highly prestigious national award.

Hodges, a language arts teacher, earned a bachelor’s degree in middle school-level English in 2003 and a master’s degree in educational leadership in 2008 at A-State.

Dr. Tom Kimbrell, commissioner of the Arkansas Department of Education, and Dr. Gary Stark, president and chief executive officer of the National Institute for Excellence in Teaching, made a surprise visit to Douglas MacArthur Junior High School for the award presentation.

While at Arkansas State, she served as president of the campus chapter of Kappa Delta Pi honor society in education.

“She was one of my favorite students,” remembers Dr. Ann Ross, associate professor of teacher education, who was faculty advisor to the honor society.

Dr. Thilla Sivakumaran, dean of the College of Education and Behavioral Science, added, “We are excited to see another A-State alum’s hard work rewarded with this type of national recognition.  Erin is an outstanding representative of both our undergraduate and graduate programs in education.  Everyone knows A-State leads the state of Arkansas in education graduates, but awards like this remind everyone that we also lead the way in excellence.”

LITTLE ROCK - When Erin Hodges went to work this morning, she had no idea she would go home with a $25,000 check and the honor of being named one of the best teachers in the state.

Hodges, a seventh-grade English teacher at Douglas MacArthur Junior High School in Jonesboro, received the 2013 Milken Educator Award at a surprise ceremony at the school. The national award recognizes exceptional teachers, principals and specialists. Arkansas Department of Education Commissioner Dr. Tom Kimbrell and Dr. Gary Stark, the president and chief executive officer of the National Institute for Excellence in Teaching and a 2001 Arkansas Milken educator, presented the award.

“Ms. Hodges’ dedication and passion for teaching is evident in her students’ desire to learn, as well as her collaboration and partnership with her co-workers,” Kimbrell said. “The increase in students’ test scores reflects her knowledge, expertise and experience.” In addition to seeing double-digit gains in students’ test scores in 2011-2012, Hodges’ students experienced increases in their literacy proficiency scores, which were 58 percent in 2008 and 69 percent in 2012.

Hodges incorporates technology with project-based learning to engage students with the Common Core State Standards. She was one of the first teachers at her school to use a mobile tech lab in her class, with every student receiving a Nook e-reader.

Erin’s leadership skills in the school’s English and seventh-grade Professional Learning Communities build collaboration among her co-workers. Through her partnerships, Hodges helped develop a plan to build intervention for struggling students into the school day.

She also is a special education co-teacher, a sponsor of the Out of the Dark drug abuse and addiction prevention program, and is a co-cheerleading coach.

Up to 40 educators around the country will be honored for 2013. The awards were first presented by the Milken Family Foundation in 1987. Since Arkansas joined the program in 1991, more than 70 educators have been honored, with $1.75 million being awarded. For more information about the Milken program, go to www.MilkenEducatorAwards.org.