JONESBORO, Ark. – The fan support for Arkansas State University is arguably one of the nation’s best and the results of the NCAA 6th Fan Contest prove it as the Red Wolves have advanced to the Sweet Sixteen in the nationwide online competition per an announcement made this Monday (Feb. 17) by the NCAA (National Collegiate Athletic Association), CBS Sports and Turner Sports.

Arkansas State placed second in the opening round’s final results, which concluded Sunday (Feb. 16) night following six weeks of fan online voting through Facebook, Twitter, and the NCAA 6th Fan website.  As a result, A-State has been awarded $10,000 in general scholarship funds and may either award the dollars to a randomly selected student or for deposit in the school’s general scholarship fund.

The Red Wolves, who are seeded second, are presently competing against No. 15 seed University of North Carolina, Greensboro in the Sweet Sixteen bracket-style format with voting to be held Feb. 17-23.  A-State fans are encouraged to show their Pack Pride and continue voting for the Red Wolves online at NCAA 6th Fan, through Facebook or via Twitter by using hash tags #6thFan and #ArkSt in tweets.  Voting for the Sweet Sixteen concludes this Sunday (Feb. 23) at 11 p.m. (CT).   Those A-State fans who connect their Facebook to the NCAA’s 6th Fan website at www.ncaa.com/6thFan to vote can register for an opportunity to win prizes.

Following this week of Round Two voting, those schools receiving more votes than their head-to-head competitor will advance to the Elite 8, which will be announced Monday, Feb. 24.  The A-State-UNCG matchup winner advances to the Elite Eight and will face either No. 7 Bryant University or No. 11 University of North Carolina, Asheville.

The top vote getter among the two finalists of the 6th Fan contest will be announced March 16 on Selection Sunday and receive $100,000 contribution to its school’s general scholarship fund.

One randomly selected participant who registers and votes on NCAA.com will win an all-expense paid trip to the 2015 NCAA Division I Men’s Final Four (April 4-6) in Indianapolis, Ind.  Additionally, iPad Airs will be awarded in each of the five rounds to randomly chosen individuals who vote via NCAA.com in each respective round. 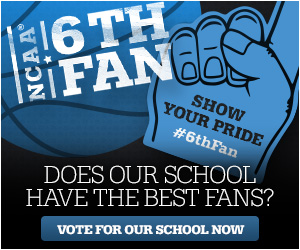