With the 50th anniversary of university status on Jan. 17, this article from the latest Voices magazine will bring back memories.

JONESBORO -- January 17, 1967, ranks among the most memorable dates in Arkansas State University’s history.

With the 50th anniversary of Arkansas State’s name change to university in 2017, memories are still vivid among students, faculty and staff who celebrated and communicated the historic development.  The Arkansas General Assembly passed and Gov. Winthrop Rockefeller signed the bill that replaced “College” with “University” in the institution’s name, effective July 1, 1967.

Following an unsuccessful run at university status in 1959, President Carl R. Reng and other university leaders had planned carefully and lined up legislative support, leading to success during the first week of the General Assembly’s 1967 session.  The entranceway to ASC soon gave way to a university on  the rise.

“I was in my first year as adviser of The Herald and my first year on the faculty,” Gambill said.  “Roy Ockert and his now wife, then Pat Montgomery, were co-editors.  We had done a lot of the work for the special edition before Christmas and already had two pages about attaining university status.  A number of A-State staff members were in the Senate chamber when the bill was being considered, including Ray Hall, Sr., Phil Pickle, Eugene W. Smith, Linual Cameron, Ernest Howell, Woody Haynes and many others.”

As Gov. Rockefeller signed the bill in his office, surrounded by Arkansas State officials and sponsoring senators and representatives, Manning made photographs.  In the meantime a snow storm moved in, creating a harrowing experience for the team’s return to Jonesboro.  Manning was driving.

“After we left highway 67, I put the car in the middle of the road and drove white-knuckled (with his three passengers) back to Jonesboro,” Manning remembered. “I hit the lab as soon as we got back. Bobby Ruff, Bob Kern and Tex Plunkett were waiting for us at the print shop.”  Kern and Ruff were printers, and Plunkett headed the Division of Journalism and Printing.

Gambill added, “Roy wrote the main article, Victor had a story, and I interviewed Dr. Reng for an article but did not want a byline.  The issue had no advertising and it was out by 3:30 a.m., beating even the morning newspapers (in Little Rock and Memphis).”

Ray Hall Jr., president of the Student Government Association in 1966-67, was on the “front-row” for the floor debate and bill signing.  “It was one of the proudest moments in my life, in retrospect,” Hall said.  “The next day I sent telegrams to the Senate and House and to Gov. Rockefeller, thanking them on behalf of the student body for their support.”

Student reaction at the Wigwam and across campus was described as bedlam.  “It fell upon me to organize an ASU Day to celebrate the momentous event,” Hall added.  “This day would include an assembly in the old fieldhouse, a parade from campus to downtown Jonesboro, then partying and dancing into the night at the Reng Center.  As seniors, my wife Barbara and I were so proud to be part of the first graduating class of Arkansas State University.”  Spring commencement diplomas carried the new name, even though it was not yet official.

In addition to The Herald, Ockert had a second campus job as editor of The Indian yearbook.  Timing the yearbook coverage was complex due to the production schedule.  Major portions had to be finalized before the legislature convened.

“The Indian staff leaders, with the guidance and encouragement of adviser Tom Manning, devised a plan.  We wanted the cover to reflect university status, even though we’d be taking a chance that the Legislature would again reject it, so we went with subtle,” Ockert explained.  Subtle included a foil stamp on the cover with “Jumpin’ Joe” sporting “ASU” across his chest, and “Arkansas State University” spelled out only on the spine.  The staff conspired with co-eds in Kays Hall to darken some rooms and light others to form “ASU” for a two-page photo spread.

As a member of the history faculty, Lee A. Dew had been researching the Jonesboro, Lake City and Eastern Railroad.  “I began collecting material on the college as I encountered it.  When I finished the JLC & E book, I decided, as it seemed the university status bill would be approved, that it was a good time to consider the history of Arkansas State from its beginnings to that time.”

The result, “The ASU Story: A History of Arkansas State University 1909-1967,” was published with a bright red cover and sold for $4.  The 224-page book details the decades between the institution’s origins in 1909 to university status.

“I did get the full cooperation of the administration and the folks at the Print Shop and was fortunate to get interviews with many of the ‘old timers’ from the college’s early days,” recalled Dew, who retired from Kentucky Wesleyan College as history professor and department chair.  “Basically I did the book for my own satisfaction, and in the hope that it would preserve some history that otherwise would have been lost – voices that otherwise would not have been heard.” 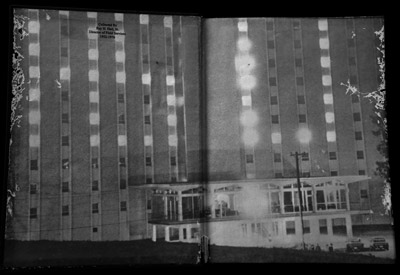